Part II: Ruins on the Mountain

When the Canadian poet (not yet a novelist, not yet a musical sensation) Leonard Cohen came to Hydra in 1960 and bought a home there, he attempted to inveigle himself into Ghikas’s villa by means of his slim connection to Jacob Rothschild, whom he had recently met in London. Jacob Rothschild – the Fourth Baron Rothschild – was the son of Barbara, whom Ghikas took as his second wife in 1961.

As told in Various Positions, Ira Nadel’s biography of Cohen, the young poet was firmly rebuffed at the door by Jacob’s sister (Nadel doesn’t say which sister; Jacob had two). Ann Diamond’s version of this tale, related in her book The Man Next Door, is that Ghikas himself refused Cohen entry; Diamond also wonders, in her review in The Toronto Quarterly of yet another biography of Cohen, whether the Rothschild children might have “had a bone to pick” with Ghikas. In any case, Cohen is supposed to have left in a huff, cursing the place.

Not long afterward – goes the story – Cohen was on his own terrace (which faces the mountain, not the sea) when he heard and saw the conflagration on the mountainside. This tale – Cohen being turned away, Cohen issuing a curse, the house then burning down – is now part of Hydra legend.

In Nadel’s account, the more banal cause of the fire was the accidental ignition of kerosene set down in the wrong place by a thoughtless watchman. This is consistent with the version of the event recounted in a New York Times blog post: the fire started when a drunken servant carelessly discarded a live cigarette.

So we have the highly combustible combination of a drunken man, a cigarette and kerosene – and, for the supernaturally inclined, a curse. But, as my father used to intone, the plot thickens. An article in The Australian ascribed the fire to the housekeeper, who was purportedly motivated by loyalty to the first Mrs Ghikas. How the housekeeper is supposed to have set the fire has not been recorded, to my knowledge.

Different sources give different years for the calamity: 1960, 1961, 1965. (If it was really 1965, which is doubtful, then it was the year before my family arrived.) Ghikas’s own account of the fire, given in a presumably poorly translated interview that appeared in the newspaper Kathimerini in 1993, makes no reference to curses or pathologically loyal female servants:

“my house was burned in 1965, it burned down by negligence of a servant. He was there to guard it when we were missing but when we were missing he use to go to the tavern and getting drunk. One night he went home drunk to sleep, he threw his half-burnt cigarette and the house caught fire, when he woke up the flames were coming out of the roof and had already burned three rooms”

As far as I know, no one was hurt in the fire, which raged until it burned itself out. (Ghikas was likely at his Athens home at the time, or perhaps he was traveling with Barbara, who was English.) Fire-fighting on Hydra was, shall we say, rudimentary. There were no fire trucks, and even if there had been, there was no road by which a wheeled, motorized vehicle could have reached the villa, high above the village. There were, naturally, no fire hydrants either. The primitive nature of island life was bewitching and kept people there for years; sometimes it also led to their undoing.

For Ghikas, it seems, the spell was broken. Or the shock was too great. Or he was heartbroken. Or all of those things. Ghikas did not return to rebuild his home. Instead, he settled on Corfu, where Leigh Fermor and other old and new friends would visit him and he would go on to produce many superb paintings.

When asked why he left Hydra, Ghikas responded, “I never left, they kicked me out.” It’s not clear what he meant by this. Could he have been alluding bitterly to the negligence of the drunken servant? A note by Alan Massie in his wife’s volume of poetry suggests a different outrage: Massie says that Ghikas’s paintings were stolen following the fire. In his book, Seven Decades of Photography, photographer Wolf Suschitzky, who was a guest of Ghikas not long before the house was destroyed, claims that, “The entire painting collection there was lost.”

Hearsay still swirling around is that villagers rescued whatever furniture they could but left the paintings to burn. Perhaps this was in Ghikas’s mind when he said, “they kicked me out”. The rumor suggests that the wealthy, cosmopolitan, patrician Ghikas and his neighbors – ordinary islanders – were on a poor footing.

Ghikas said in his interview for the Kathimerini that he never set foot on the island after the fire: all was destroyed; the magnificent 18th century mansion could not be resurrected. Ghikas explained,

“There I had spent my childhood, and then I was there in my first marriage and later in the second. I had done many projects in Hydra…I couldn’t see it again.”

Ghikas is gone – from Hydra and from this world – but the ruin remains. This is a photograph of it that I took in 2011. 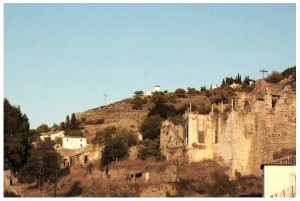 Thus begins the poem “For Ghika” in The Poetry of Bettina Helen Massie. A note in the book by the poet’s husband says that they used to filch figs and almonds from the garden. The writer Henry Denander admits that he tried many times to get inside the remains of the Ghikas estate but never managed it. He is not the only one to have become beset with the notion of gaining entry to the place, either before or after its destruction.

Viewed from the house where my mother, my sister and I used to gather almonds, here is part of the long wall – almost indistinguishable now from the mountainside to which it faithfully clings –­ that still surrounds the Ghikas estate:

And this is a photograph I took one May morning of Alison waiting for my mother, my daughter and me on a bench in front of the island’s old folks’ home, in the shade of the giant eucalyptus tree that guards the foot of the Ghikas property: 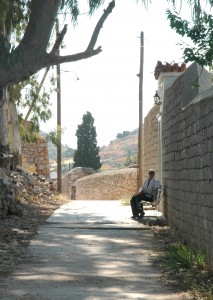 Here are Alison and my mother further along that same road, heading toward the cemetary, to pay their respects to an old friend, and thence to Vlychos: 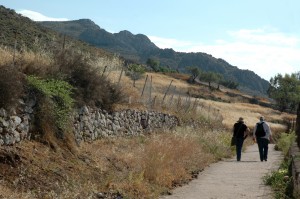 Old Hydra hands cannot approach Kamini via this back route from Vlychos without thinking, however fleetingly, of Ghikas and of the fire. When I take newcomers on this road I tell them about the house, and the man, as my father told me, though I omit the ghost. Visitors are intrigued by the story’s loose ends. Some want to know who owns the property now, which I cannot answer. Like so much else on Hydra, the ownership of the estate is the subject of speculation.

For me, the question that niggles least is why he never returned. What I wonder most is this: once he resettled on Corfu, how badly did Ghikas long for Hydra and his view of the sea from the mountainside above Kamini? This painting, done in 1967 – years after Ghikas left Hydra – of a moonlit harbor scene that he called Nocturnal Hydra, suggests that Hydra haunted Ghikas’s art just as Ghikas’s house came to haunt Hydra. 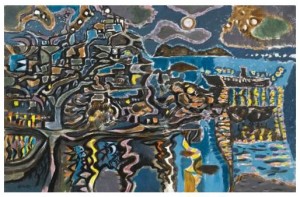 As the ruins are being absorbed into the mountainside, Ghikas and his mansion have become absorbed into the island’s rich mythology. Intact, the house inspired great works of art and literature. Even as a burnt-out shell it still fires the imagination and sparks flights of fancy. As my sister has said, it is as though the burning of the house set free its creative genie, which is still floating down on Hydra in tiny flakes of ash.

Helle V. Goldman (with big thanks to Alison and Johanne)

Forty-five and a half years ago I arrived on the Isle of Hydra with my five year old son. We came for a month, stayed two years, left and have serially returned for long sojourns since. My son’s first playmates: the author of this two part piece, also age five, and her scrumptious, flaxen-haired three year old sister. When both our families were first stung by the Hydra asp it was a poor, ruin-filled island, dirt cheap, populated by, of course, Greeks (fisherman, seamen), as well as poor would-be writers, poets, painters, divas, drunks, mercenaries, ne’er-do-wells among a soup of international others. In recent years, Hydra has evolved into a jet-set destination. One could live for three months then on what a meal costs today. Almost no ruins (except human ruins, like me), remain, with the exception of – unforgettable, stately, evocative – ballast to all who love Hydra, Ghikas’s on the mountain side. I see it, breathe it, every day. Long may it ruin. 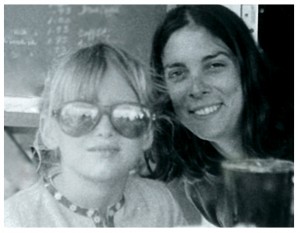