Guest: Part I of II – Ruins

I’ve a long, rich association with the author of this post, Helle Valborg Goldman. It’s a pleasure to welcome her as my first invited guest. She’s a kindred spirit, always was, always will be. Helle has been mulling over long form ideas relating to the atmospheric, mythic Isle of Hydra, Greece, where our families met, got close and where I happen to be right now. One of these explorations is a documentary film idea she’s spearheading for which a Norwegian film company has shown interest and, recently, Helle, a director and small crew visited the island and began preliminary interviews with some of the colorful, long surviving cast of residents.

Helle’s Danish mother and American father brought her to Hydra when she was three months old. Her formal education began in a village school on Hydra and ended at New York University where she received a doctorate in anthropology. She has lived and worked in Tanzania and now lives north of the Arctic Circle in Tromsø where her office at the Norwegian Polar Institute overlooks the sea but no ruins. She has recently translated the book, So Long, Marianne, by Kari Hesthamar, from Norwegian into English.

Part I: The Ruins on the Mountain

Lingering on the mountain slope above the Greek village where Alison has had her writing retreat since the 1970s are the ruins of the Ghikas mansion.

Ruins are everywhere on Hydra. At the peak of the little island’s prosperity, in the 18th century, there were perhaps as many twenty-five thousand inhabitants. By the mid-20th century the population had dwindled to some three thousand. Among the inhabited stone houses were many long-abandoned dwellings in various states of decay. During the war, thick ceiling beams were scavenged for firewood, assisting the natural forces of deterioration. The ruins were rarely entirely lifeless. Giant fig trees took over courtyards and terraces. Cats laid claim to dark corners in which to give birth to their young. Some ruins became donkey and goat pens. In the 1960s, errant hippies used them as crash pads. This is when my family first came to Hydra, though we did not live in a crash pad.

Most ruins had been humble homes, some no more than two- or three-room stone huts. A few were grand. One of these was the 18th century mansion of the Hadjikyriakos-Ghikas family. What set this ruin apart was that it was a new ruin. Up until at least 1960, it was the home of the painter Nikos Hadjikyriakos-Ghikas (1906-1994).

Ghikas – as he was known (sometimes Ghika) – was a leading Greek painter. His works are featured in the National Gallery in Athens, the Musee d’Art Moderne in Paris, the Tate Gallery in London, the Metropolitan Museum of New York and private collections. He produced fine paintings during his many years in his family home on Hydra. Then the house burned down, never to be rebuilt.

Here is an undated photograph of the grand white-washed villa and its terraced gardens: 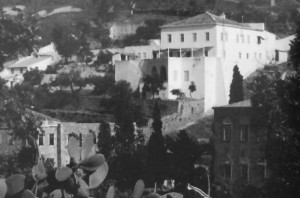 The American writer Henry Miller (1891-1980), accompanied by his friend, the British writer Lawrence Durrell (1912-1990), visited Ghikas in that house in 1939. This was the eve of the war that would devastate Europe and wreak convulsions of hardship and conflict upon Greece that would far outlast the war itself. Miller’s account of that journey, The Colossus of Marousi, came out in 1941 and is considered by many to be his greatest book. Miller worked on the first draft while staying at Ghikas’s house.

The American was intoxicated with Hydra – with its Cubist blocks of white-washed houses, its “wild and naked perfection.” Ghikas’s art also had a powerful effect on Miller. He wrote:

“Ghika’s canvases are as fresh and clean, as pure and naked of all pretense, as the sea and light which bathes the dazzling islands. Ghika is a seeker after light and truth…It was Ghika’s painting which roused me from my bedazzled stupor.”

Miller described the painter’s house and its mistress in similarly rapturous phrases:

“Madame Hadji-Kyriakos, Ghika’s wife, laid a wonderful table; we rose from the table like wine casks. From the terrace, which was distinctly Oriental in flavor, we could look out on the sea in drunken stupefaction. The house had forty rooms, some of which were buried deep in the earth. The big rooms were like the saloon of an ocean liner; the little rooms were like cool dungeons fitted up by temperamental pirates. The maids were of divine origin…”

This is a painting of Hydra that Ghikas did in 1938, the year before Miller and Durrell came to visit:

For people who know this place, it is easy to imagine Miller, Durrell and Ghikas on the vast terrace, drinking whiskey as the sun sank and first the bats and then the stars came out. Their view would have taken in the village of Kamini virtually in its entirety. The tiny old cottage that was to enter into Alison’s care nearly forty years later lay far below the Ghikas mansion and on the other side of the valley that runs down the middle of the settlement, scoring it like a loaf of bread.

At roughly the same altitude on the mountain slope as the Ghikas estate – to the right of the three men drinking and talking on the terrace as they faced the village and the sea and, across it, the Peloponnese – was an old house that friends of my parents (and, later, of Alison) would acquire in the 1960s. My mother, my sister and I would pick almonds there, in the garden of that house. As an adult, I stayed in that house and sat by the olive tree at the back of it and looked across the gully at the crumbling walls that steadfastly protected the wreckage of the Ghikas property.

My father used to try arouse our interest in the house when my sister and I were little girls, as we walked past it on our way back from having swum near the village of Vlychos. He’d talk about the mysterious circumstances of the fire and the fact that the owner, who had been rooted to Hydra and had done perhaps his best work there, never came back after the house burned down. My sister has recently reminded me – I had forgotten this part – that he also made much of a ghost that was supposed to haunt the place. My father was a good story-teller. I can’t help wondering now whether the ghost was local lore that he picked up or if he invented that bit himself.

But I am jumping forward in time. Let me go back again to when the magnificent house was still whole.

After Durrell and Miller, other writers, artists, socialites and celebrities alighted on the island, enjoyed the hospitality of the Ghikases and were inspired by Hydra. Among these visitors and friends was Patrick Leigh Fermor, who ranks among Britain’s preeminent travel writers. He is credited with having called the house “a perfect prose-factory”. Leigh Fermor lived there, on what he called the “inviolate island” of Hydra, in Ghikas’s “fine family ziggurat”, for two years in the 1950s, working on his book, Mani: Travels in the Southern Peloponnese. The book was brought out in 1958 and is considered one of the outstanding travel books of the 20th century.

This is a painting Ghikas did of his house in 1955, about when Leigh Fermor and his wife Joan were in residence: 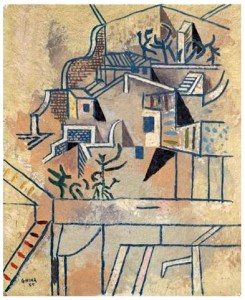 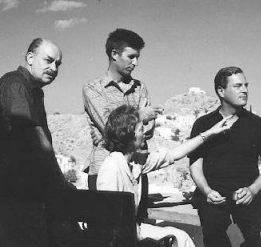 Here is Craxton, sketching in ink on the terrace in 1960 (Alison’s house is down the hill, approximately by the tip of Craxton’s nose): 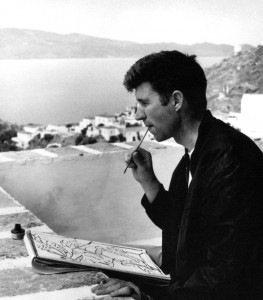 Here is one of Craxton’s paintings of Hydra: 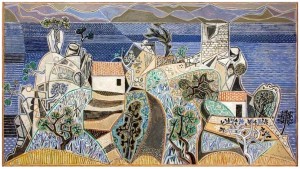 And here is Ghikas on his “Oriental” terrace, apparently surveying his gardens, in that period: 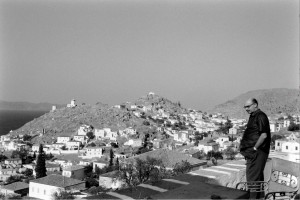