“Was I sleeping while the others suffered?”

“Was I sleeping while the others suffered? Am I sleeping now? Tomorrow, when I wake, or think I do, what shall I say of today? That with Estragon, my friend, at this place, until fall of night, I waited for Godot?”

[from Waiting for Godot by Samuel Beckett]

[- see visual -Barry McGovern as Vladimir in Waiting for Godot] 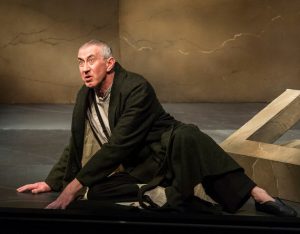 On International Holocaust Memorial Day, January 27th, genocide/s inflicted during World War II are meant to be commemorated worldwide. Following, is an extract from Fiet’s Vase and Other Stories of Survival, Europe 1939-1945 taken from the Introduction to Part II.  It makes an effort to put this seventy-plus-year-old backdrop to that Holocaust in context:

World War II lasted for 2,174 days. The precise sum of what was lost between 1939 and 1945 is incalculable. Even the numbers – civilian as well as military deaths – are not precise. Estimates are that 362,561 Americans, 484.482 British and members of the British Commonwealth died, so did 420,343 Greeks, 240,000 Dutch, 6 million Polish, more than 6.8 million Germans, 3 million Japanese (138,890 in the atomic bombing of Hiroshima), 6 million Chinese, more than 20 million Russians (among them 3-5 million murdered prisoners of war) . Two hundred and fifty thousand Gypsies, and tens of thousands of homosexuals, disabled and mentally defective people were murdered. In total, in Asia and Africa, Australia and Europe – Romania, Hungary; Czechoslovakia, France, Austria, Lithuania, Latvia, Belgium, Yugoslavia, Italy, Bulgaria, Denmark, Estonia, Norway; Luxembourg – more than 46 million died. Six million Jews from across Europe died, a million or more of them children. The attempt to destroy the entire Jewish population of Europe is now commonly described as the Holocaust or Shoah.

Of the estimated 3.3 million Jews living in prewar Poland, 3 million were annihilated during the war. Poland became the central convergence and collecting point for transports of deported Jews from across Europe. Millions of Jewish people were dropped there, from trains that headed back to collect more human cargo and return to Poland. Raul Hilberg describes how “a man would step off a train in the morning and in the evening his corpse was burned and his clothes packed away for shipment to Germany.” Six major (and many minor) death camps were located on Polish soil – Kulmhof. Belzec, Sobibor, Lublin, Treblinka and Auschwitz. Gas was the preferred method of annihilation, leaving Polish soil soaked with Jewish blood like no other part of Europe.

Very little slipped through death’s fingers in Poland. Yet a few of the doomed did live. 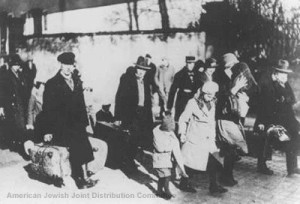 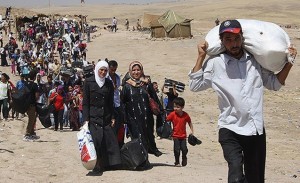 It seems to me as if, after a brief pause to sit up and rub our eyes, we never really awakened from yesterdays bad dream. We seem to be lying in that very same springless bed while related nightmare/s continue.  According to UNHCR, the U.N. Refugee agency:

We are now witnessing the highest levels of displacement on record.

An unprecedented 65.6 million people around the world have been forced from home. Among them are nearly 22.5 million refugees, over half of whom are under the age of 18.

There are also 10 million stateless people who have been denied a nationality and access to basic rights such as education, healthcare, employment and freedom of movement.

In a world where nearly 20 people are forcibly displaced every minute as a result of conflict or persecution, our work at UNHCR is more important than ever before. 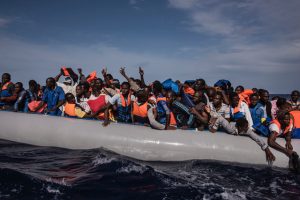 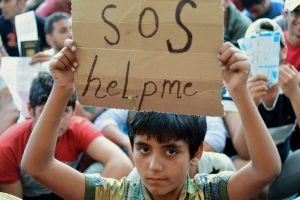 And those mentioned by UNCHR count refugees and those displaced, but not the other million forms of misery, torment, wars, drone strikes, oppression, cruelty, persecution spangling history since the much-memorialized world from 1939-1945. Here’s Beckett’s quote reconfigured, from one who, like Vladimir, is often supine. (Forgive me Sam.) Then, reconfigured again:

Am I sleeping while the others suffer? Was I sleeping then? Yesterday, when I woke, or thought I did, what  did I say of yesterday? That with Miep, my friend, at that place, until fall of night, I waited for Godot? 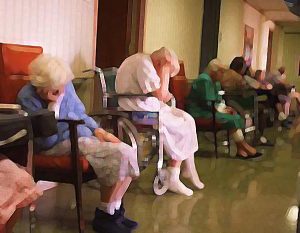 Will I sleep while the others suffer? Will I sleep soon? Today, when I wake, or think I do, what shall I say of tomorrow? That with Micah, my grandson, at this place, until fall of night, I await Godot? 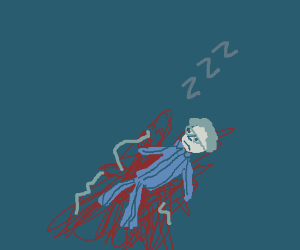