Page 100 – A Special Fate, Chiune Sugihara, Hero of the Holocaust

Oct 18, 2016 By Alison Leslie Gold in A Special Fate, Chiune Sugihara No Comments 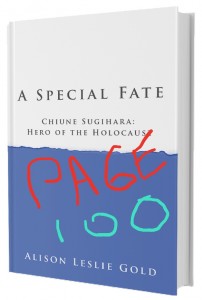 … They arrived in Prague, Czechoslovakia, by train. The consulate was an old, rococo building on the Moldau River. the interior was luxuriously furnished and had a grand crystal chandelier. Several rooms were lined with Japanese silk, one contained silver decorations, two others contained gold decorations.

As soon as he was settled, Sugihara was ordered to write a report that gave all the details of his work in Kaunas. part of his responsibility was to list the number of visas that had been stamped by his consulate. Although he delayed sending the information in, regardless of the possible repercussions, he told the truth.

Sugihara’s log showed that he’d issued more than 2,193 visas. Some of these visas were for individuals, others were for entire families, so he couldn’t accurately account for the total number of individuals who had been given visas. of course, there was also the problem that he’d stopped keeping a list in early August, so he couldn’t add up the total visas given while in Kaunas. He compiled his documents, then sent them to Tokyo.

Chiune and Yukiko worried about what would happen when these papers arrived in Japan. They lived with the anxiety of repercussions for their deeds in Kaunas.

In late September 1940, Japan and Germany—Hirohito and Hitler—signed an alliance known as the Axis tripartite pact, which meant that Berlin, Rome, and Tokyo were now allied.

Prague was a very social city with an active nightlife. It was especially lively for diplomats. There were parties. Often the diplomatic car drove them back to the consulate quite late. The city was silent except for the beautiful church bells, which could be heard throughout the entire city.

Yukiko began to relax. She started to study the German language, and also to paint on canvas. She liked prague so much that she painted the sights of the city of one Hundred Spires—the seven bridges that crossed the river, and the gargoyles with pipes protruding from their mouths, high up on St. Vitus cathedral.

When Sugihara had leisure time in Prague, he took the family for drives out into the countryside once again. they visited pine forests, castles, and forts. the children were getting older and could appreciate the sights much more than before.

One day Sugihara was told that one of Hitler’s most important foreign ministers—Joachim von Ribbentrop—was coming to Prague. Sugihara and other diplomats were sum- moned to a meeting. Sugihara dressed carefully that day.

His car drove through the city toward the meeting past the Prague castle high on a hilltop and the astronomical clock on Town Hall.

As Chiune approached the room where the meeting was being held, an unpleasant German shepherd dog blocked the door. The dog was tied to the entrance, and growled at each diplomat that passed. its master, Herr von Ribbentrop, had taken the largest, highest desk in the room. A large photograph of Hitler in uniform making the nazi salute was on the wall in an ornate frame.

Ribbentrop spoke condescendingly to the assembled diplomats, ordering them all to leave Czechoslovakia immediately. Silence followed this statement. No one had the courage to speak up except Chiune Sugihara, who broke the silence. He stood up and addressed Ribbentrop, asserting that Ribbentrop couldn’t just order them to leave.

He said that since the triple Alliance, Japan was an equal partner with Germany, not to be treated in any subordinate way. Although Hitler had, in his racist, hating way, often called Japanese people “lacquered half-monkeys” they were now his allies.

When Chiune returned home, he told Yukiko that Ambassador Oshima had instructed him to shut the consulate in Prague, and open one in Konigsberg, Germany, near the Russian border. Noticing the crease in Yukiko’s forehead, Chiune reassured her that the Kaunas visas had not been brought up in Berlin.

Early one bitter, cold morning in February 1941, Zelda Bernstein woke Masha. Zelda had gotten a visa from the Japanese consulate in Kaunas, but she didn’t explain the details to Masha. She just told Masha to pack because they were leaving Vilna.

Masha was bleary from sleep and wasn’t sure she’d heard right when her mother told her they were going to Japan. They packed photos, mementos, clothing, and food in a bundle for the journey. They had honey cakes, which Masha’s cousin had baked, and cans of sardines. They took a drozka—a horse-drawn “taxi” buggy—to the Vilna train station. …

Chiune Sugihara, Hero of the Holocaust

available as a paperback and kindle on Amazon