Page 100 – The Woman who Brought Matisse Back from the Dead

Oct 5, 2016 By Alison Leslie Gold in The Woman Who Brought Matisse Back From the Dead No Comments 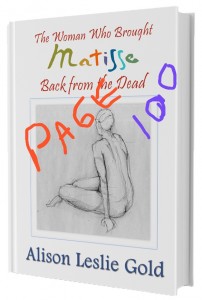 … When John left, Alice was still sleeping. He stopped at his apartment, filled a little bag with a change of underwear and a toothbrush, hurried to Claude’s apartment. At Union Square he got caught in rush hour. He imagined people hurling through space when he saw bunches of bodies popping up from the subway step. Against his own will, he stopped in a liquor store and bought a case of vodka and a gallon of grapefruit juice. It was too heavy to lug, so he arranged to have it delivered. It would not hurt to test himself.

When the delivery arrived, he decided to have just one drink, see if he could stop at one. He mixed juice and vodka to a specific shade of yellow. He had two drinks and stopped, was relieved. Obviously he had regained control. That night, though Alice waited, he did not go back to her house. He slept curled up in a corner that was already cleared.

He rented a dumpster, had it parked at the curb in front of the building. When all the plastic packages of clothes were cleared, he found a three foot high pile of papers and junk mail on a coffee table.  He carefully went through the pile. At the very bottom of the pile, lay the lease to the apartment. It was dated 1959. He napped for an hour then chopped up the old mattress with an ax. He chopped up the rotting furniture and carried the bits and pieces down to the dumpster. He filled black plastic bag after bag with fabric and old newspaper. If house dust came from dead skin, he had come to live with it. He was willing to be a cannibal.

There was another pile of unopened mail against the wall, this one shoulder-high. Again he went at it piece by piece. He found a slip of paper with what might be a bank account number. He did not throw away a scrap of paper the size of a postage stamp without considering whether or not it might be important. After a few more hours of work the day had passed. He mixed grapefruit and vodka to make a drink that was a shade of buttercup and curled up to sleep. When he woke, he swallowed a few hairs of the dog.

As the mounds against the walls diminished, filthy paintings were revealed. He uncovered a door and discovered that it was a closet filled with debris. There was a shelf with a pile of cocoa-brown towels folded neatly. He tried to unfold one of the towels but it broke in two, revealing that it had once been a snow-white terrycloth towel.

His work had become an archeological dig, layer after layer. He discovered a wood-burning fireplace. Nothing he tried would clean the brick over the fireplace. Finally, he tried acid. It worked, revealed soft, charming, ochre bricks. He uncovered mildewed books, articles cut from old newspapers, a postcard written in all caps:

PACKAGES AT MY DOOR.

He put one newspaper clipping aside. In it was a black and white photo of a slim, fair-haired young man with the face of a Great Dane holding a paintbrush with a long handle. The man was painting an abstract canvas. The subject matter of the painting was an abstract sailboat. Standing against him, looking over his shoulder, stood Claude. Her waist was cinched with a tight belt. She looked about 40.

The caption beside the photograph read:

Claude Foot watching her artist husband, Roy, putting finishing touches on one of the paintings he is exhibiting this month at the Little Gallery in Maple Road, Birmingham.

The text of the clipping read:

Two of Roy Foot’s most prized possessions are a letter from the great French painter Henri Matisse and his autographed book of pencil, ink and charcoal drawings.

They came to him after a surreptitious inspection of the young artist’s work by the master ….

Roy says that as far back as he can remember he wanted to paint. He studied both before and after World War II. For four years he lived and painted in Paris.

That was when his wife, Claude, who posed for Matisse, persuaded him to look at Roy’s work – with the resultant commendation. Now Foot has returned here from the current exhibit of his paintings at the Little Gallery in Birmingham.

Foot describes his work as semi-abstract. He “feels” his angles and curves and puts them were he “sees” them in the composition.

He’s a young man of casual mien with eyes atwinkle or of somber pensiveness. It’s the former mood that provides the whimsy in the birds he loves to paint.

For a long time he was interested in “pure” color, but today he works principally with cobalt blues, Mars green and umbers.

He discovered an “affinity” for one or another of those tones by shifting jars of permanent color about on the floor one evening. And that was it. As a result, he has completely discarded reds and similar flamboyant tones.

He’s no novice at exhibiting. In Paris he showed at the Salon d’Automne and Salon de la Jeune Peinture. He has had one-man shows at Galérie Breteau and the Hacker Gallery in New York.

Now he is returning to their studio-home in Fernanina, Fla., which, incidentally, they built with their own hands. Roy grins when he tells about the 3,000 bricks Claude personally cleaned before the chimney could be built.

Claude works in her garden and waters her banana tree, which was flourishing when he left. And he can’t wait to see “my son,” Toby, a formidable police dog his wife befriended. She’ll be cooking her specialty Boeuf Bourguignon, and as Roy puts it – “re-arranging her clothes.”

And Roy will paint.

The case of Popov was half-empty. John found bundled mildewed newspapers full of worms. He found something the shape of a book wrapped in what must once have been a crinkly citron scarf. When he unwrapped it, the silk fell apart. Inside, in a small framed print, the glass smashed, a Matisse painting – Woman in a Blue Gandoura Dress. Another small painting in a frame had been crushed beyond recognition. There were more bags of clothes and fabrics. …

[The Woman who brought Matisse Back from the Dead

is available in paperback and as a kindle

« Breakfast at Malibu » A nocturnal visitor