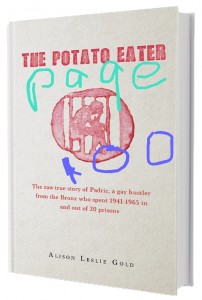 … Nick, an Italian, serving twenty years for murder, didn’t like Padric sharing his cell. Nick hung around with what he called the “elite” who in his book were the Italians. He told Padric why he didn’t like him.

Nick had pin-ups on this wall. He had gross girlie magazines hidden under his mattress, also dusty webs made by spiders under his bunk where crumpled tissues were thrown after he jerked off. Not one person during his 20 years in prison guessed that he would live with and love another man when finally released.

To Nick’s relief, Padric McGarry was transferred into Cellblock 1-F, the homosexual area. 1-F was carefully guarded and segregated. At the intake, a captain who wore a girdle touched his arm.

You are better off with our own kind. Bend down.

Sex in Dannemora: On the fly, in hallways, with the guy in the chapel, any place he could snatch three to five minutes.

He never had sex with all his clothes off. It was possible to have sex in the belfry. It was safe because it had a long, spiral stairway and even the lightest step on the stairway would ring because the steps were metal. Someone coming up the steps could be heard a mile away. The routine was to tell the guard that he was going up to sweep up the dead green flies, and to send ‘Jerry’ or another trick up with a mop. An all clear might mean five or ten minutes together.

He went to work in the prison tailor shop where he was taught to measure men by an old tailor, using a string he tied to his waist. As instructed, he measured around the neck and added one-half inch for wearing ease. He measured around the fullest part of the man’s chest, used the string. To measure hips, he measured at the seat or the fullest part of the hip. He marked the tape position with pins on the undergarment and measured down from the waist using pins to establish a hipline. He noted the distance from waist to hip. Finally he measured the center back from the prominent neck bone to the waist string.

For sleeve length, he said, Bend your arm. …

Excerpt from The Potato Eater

available as a book or kindle on Amazon

« Page 100 – from Elephant in the Living Room » Breakfast at Malibu