Jun 18, 2016 By Alison Leslie Gold in A Special Fate, Chiune Sugihara No Comments 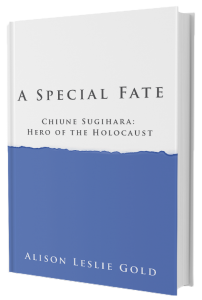 The baby born on the first day, January 1 of the new century, 1900, was a boy. He was born on an especially cold winter day in a small town named Yaotsu on one of the straggling chains of islands in the Far east known as Japan. the boy was named Chiune Sugihara.

There is a bit of Japanese folklore that made Chiune’s parents think that perhaps their son might be special. It’s believed that during particularly cold winter nights in Japan, a Snow Woman may appear dressed in white. She is an apparition, pale and cold like the snow, and is blamed for mysterious happenings.

Sometimes, people say, the Snow Woman appears with a new winter baby, a baby like Chiune, in her arms. This baby is meant to have a very special fate. Perhaps their son chiune Sugihara was meant to do something special during his life.

Summer in Yaotsu was boiling hot, so the large Sugihara family visited Grandpa and Grandma in the mountains to cool off in the pine and bamboo woods.

Chiune had five brothers and one sister. He and his brother Toyoaki liked to  fish in the river. First they’d dig in the mud for fat worms to use as bait. Because they had no fishing lives, they’d wait for a horse and a buggy to pass by, then they’d enrage the horse by pulling hairs from its tail, using long sticks of bamboo as snags.

The horse would bolt, but before the driver of the buggy could admonish the children, they would run away. These strong horsehairs were used as fishing lines to catch trout and other tasty fish that swam in the Kiso River. Even as a small boy, chiune was a strong swimmer who could cross the entire width of the Kiso, which nestles beside Yaotsu.

Late in the day, after fishing, Chiune and the other children played a new game that had come to Japan from America. it was called “baseball” in English and “yakyuu” in Japanese, and young Sugihara was a natural player. Even though old-fashioned people referred to baseball as “the pickpocket’s sport,” he especially loved stealing home. They feared that “stealing” would corrupt their youth. Unlike American baseball uniforms, Japanese children wore brightly colored kimonos and clogs that made running difficult.

At the end of the day, tired and hungry from fishing and baseball, chiune and his friends often took the short route back home across the rice paddies. They passed workers who were bent over cultivating the rice. These workers wore broad-brimmed straw hats and had rush mats tied on their backs to protect them from the strong sun.

Not so far away from Yaotsu, the Russo-Japanese War was being fought. Both Russia and Japan had imperialistic designs on Manchuria and Korea. Japan had attacked the city in Southern Manchuria called port Arthur in May 1904, starting the war. Although the Japanese were happy because their army had captured port Arthur and defeated the Russians at Mukden, many boys from Yaotsu had died. The whole town mourned the ash-filled urns sent back to Yaotsu instead of their young sons.

Chiune’s father, Mitsugoro Sugihara, was the emperor’s local tax collector. His mother, Yatsu, was the town beauty and had come from Samurai ancestry. Samurai had long been known as great warriors and aristocrats. Chiune admired the Samurai spirit, so he pleased his parents by throwing himself into his studies and bringing home report cards with very high grades.

Japanese children were taught a code in school. it had three laws: (a) Do not be a burden to others; (b) Take care of others; (c) Do not expect rewards for your goodness. Chiune memorized these laws and could say them by heart. But, he wondered, would he be able to live up to such high ideals?

Two earth-shattering events marked Chiune’s early years. In 1910, his father began to work for the Japanese government in faraway Korea. From then on, his father was rarely at home. And, in 1912, on July 30, emperor Mutsuhito of Japan died. Within two years the two men he idolized most had been taken away from him.

Some people in Japan believe that the spirit departs from the body at the time of death and takes the form of a bluish-white ball of fire with a tail. After the Emporer’s death, many claimed to have seen his spirit hovering over rooftops at night, or thought they’d seen the Emperor’s spirit in shooting stars. Chiune kept a watchful eye open in case he, too, got a glimpse of the Emperor’s spirit.

Mitsugoro Sugihara left government service in 1915 because he’d developed an interest in speculating in Korea. He did not return to Japan. Instead he opened an inn in the Korean countryside outside of the city of Seoul.

In spite of the physical distance between them, Chiune’s father was determined that his son would become a doctor. But, as Chiune got a little older and went to high school, he realized that he did not want to be a doctor at all. He wanted to become a teacher. When he admitted this to his father, his father became furious. 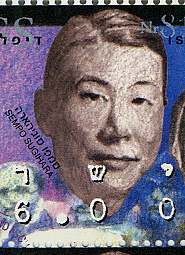 [A Special Fate, Chiune Sugihara, Hero of the Holocaust is available on Amazon as a paperback book or a kindle, written for ages 1-14 or anyone else]
« Page 1 – Love in the Second Act » Page 1 – Clairvoyant