Jun 5, 2016 By Alison Leslie Gold in The Potato Eater No Comments 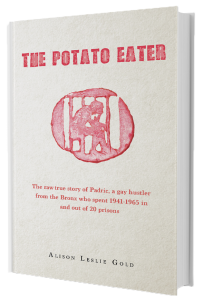 A FAMILY. Twelve children and two adults – marital status unknown – crossed the Atlantic from Ireland. The adults couldn’t cope so they swaddled the children with every piece of clothing they could grab from a church rummage and took the ferry from South Ferry, Manhattan to St. George, Staten Island in search of orphanages run by the Catholic Church. Clamping the small ones on their laps, lining up the larger ones, the family crowded onto wooden benches on the deck of the drab, double-ended boat with their backs to lower Manhattan’s skyscrapers. The Statue of Liberty was shadowed in murk because of a leaden sky; close by, freighters were anchored at sea waiting for available docks in order to unload cargoes.

Street venders on Staten Island hawked pills that would protect against approaching Halley’s Comet. Newspaper boys shouted to alert those disembarking the ferry to wear helmets or head-covers against the dangerous showers of debris that was about to fall on their heads should the comet pass too close.

The parents’ picked up a copy of The Daily News, read, circled in red crayon:

…it is believed that the comet’s tail is full of deadly cyanogen gas. Planet Earth may hurtle straight into this brew like a cannonball. It’s likely that the skies will curdle and the seas will boil and every living soul will smother. It’s calculated that the world will end sometime between 10:20 P.M. and midnight on Wednesday, the 18th of May 1910.

Were we fools to leave Ireland, the mother wondered.

A Priest separated the girl and boy children. The girls went into the Loretta Convent, the boys were sent to St. Joseph’s Seminary. No more information about the parents exists, except a rumor that they both either died or disappeared, or, perhaps, that the wife died of a broken heart. These variations of factless rumors were told to him by Mary, his mother, at different times.

There was something funny – peculiar not haha – about the stories. Maybe Mary made them up? Padric never saw one souvenir or trace of her parents. Nor was there a family rosary left behind. Nothing.

Several little girls in the Loretta Orphanage got headaches that caused a high fever. Soon these wee girls were unable to move their limbs. The Doctor visited, called the illness poliomyelitis. The Sisters referred to it as infantile paralysis. The older children renamed it “The Crippler.” The Nuns blamed it on the poor, dirty Italian immigrants who had begun to move onto Staten Island.

Afraid that animals were the carriers, the City of New York exterminated seventy thousand cats. Mother Superior told Sister Bright to hang a giant flytrap in the kitchen at the orphanage. Also, a bold red warning sign was nailed onto the front door by the city officials.

Mary had every symptom but didn’t get polio.

Sister Aida caught Mary drinking vinegar and kicked her out of the convent school. This was 1923, Mary was thirteen.

Mary would never tell what she did or where she went once she went out into the world.            Padric and another child – twins – were born on April 10, 1925 when Mary was fifteen years old. She gave birth at the House of The Good Shepherd, a Catholic hospital for unwed mothers. Good Friday happened to fall on April 10th in 1925. The home for unwed mothers was close by Battery Park, in view of the clock tower at the edge of the pier that sounded the signals for watches kept on board ships. His twin – brother? sister? – Mary didn’t remember which – either strangled on the umbilical cord or was stillborn.

When Padric began teething, Mary scrounged a piece of bacon rind to chew. She attached string to the rind and tied it to his wrist.

The Potato Eater, available on Amazon as a novella or kindle.