Heard sobs coming from my bookcase

Last night I woke because the usual velvety silence (punctuated by the sound of an occasional tiny caïque in which a solitary fisherman softly put-putts through the moonlight or a disoriented rooster crowing) was interrupted. I could swear I was hearing the sound of  weeping. I sat up. It wasn’t coming from outside on either terrace, above or below, I climbed down the metallic spiral steps. This is what I heard, give a listen: Weeping woman behind a door. Awful. Sad. But where was it coming from? It was hard to tell. My ears took me to a bookcase in the old part of the house. (See photo) 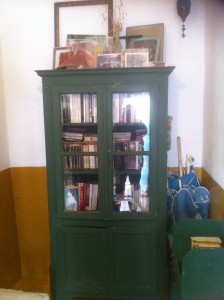 And there, leaking tears, my recent novella Not Not a Jew, desolate, feeling unloved, marginalized. When accused of abandonment, I shamefully realize, I have been favoring other works and have …. I don’t know why…put my attention elsewhere, and so have many of my readers. Thus, to re-introduce, refresh and coddle my deeply loved and esteemed creation, be reminded of the publisher’s flap copy:

In 1930s Berlin, Eli G. is an abstracted young Jewish painter addled by Marxist idealism and tangled memories of his mother and the shtetl. Longing to move to Paris, Eli feverishly paints maps while his alluring wife Vera gives up her ambition of becoming a doctor and works as an accountant. This is where Not Not a Jew – A Novella in Verst, by Alison Leslie Gold, begins, wryly shadowing the braided life arcs of Eli, Vera, and their ever-unsatisfied son Ira who are depicted in glistening kaleidoscopic shards. After trying to lose himself through sex, food, and rootless travel, Ira returns to his parents’ deathbed to grapple with his birthright. In Not Not a Jew, internationally acclaimed Holocaust writer Alison Leslie Gold presents a boldly surrealistic novella that explores Jewish identity, Diaspora, carnality and self-absorption in a century of upheaval and annihilation 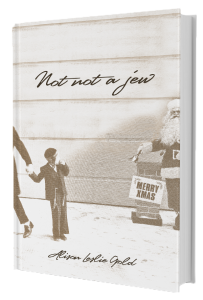 Somewhat reassured, after dabbing away the tears, after caresses, my lovely youngest creation settled down surrounded by its concerned siblings that had also been disturbed. For all, following, a little Mozart lullaby music (four hours worth, for those who tend toward insomnia). Also: A whispered promise to my precious creations, especially insecure Not Not a Jew – I won’t forget about you. Not to worry. Now sleep tight, and stop scratching your punctuation marks!