“It won’t always be this bad.” 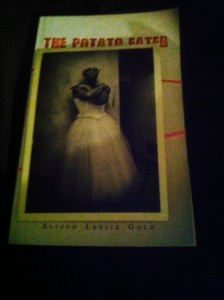 Officially, Padric and Miss Scarlet were too young for City Prison, so they were sent to Boys’ Reformatory. They were put into isolation cells with solid steel doors, but no bars. They were put far from the other boys because they were queer. Their cells were side-by-side, a screen between. They could see each other but couldn’t touch.

The Warden came to see Padric. He brought books for him to read. Young boys began passing notes to Padric under the steel door. Also notes to Miss Scarlet.

One read: Please sing, we want to hear your girly voices.

There were six or seven little holes at the bottom of both of their doors. Padric and Scarlet would get naked and lie on their bellies on the floor, and see out at the other boys who would also lie down on the floor and peek in at them. Some of the boys kissed Padric’s finger-tips through the holes.

After two weeks, Padric began visiting a psychiatrist. The psychiatrist knew all about the note passing and about the finger kissing.

You’ll get in trouble, he warned. It’s best that I put you in another institution with your own kind. Don’t you agree?

Padric and Miss Scarlet were put in a closed panel truck and taken to the Homo Block in City Prison.

All the homos on the Homo Block were adults. They were the only boys except for Miss Angel, a Puerto Rican kid who had been arrested for soliciting in drag. Miss Angel was thirteen and had syphilis. She was small and slim. They were known as “queens.”

Padric guessed that’s when he became a “queen.” He didn’t know for a while that “queen” only meant “homosexual” not that he was regal.

“Homosexual” was stamped on his records even though he’d been convicted of disorderly conduct. The theory was that “homos” are less trouble when kept together in one cellblock.

That record followed him around. It meant that he was segregated with queens in every prison where he did time, except the last one in California, and the two federal pens, years later.

Prison was just like Forty-Second Street except there were no cars and taxis or movie theaters. Padric got friendly with every “girl” in the Homo Block:

Sweet Sue from the Bronx.

Goldola, sixty if she was a day.

Miss Bondey who could sing “Some of These Days” just like Sophie Tucker.

Miss Maybe, a sweet black queen who got famous later.

Fat Blindeens who had only one eye, and only liked to go with uncircumcised men.

Kitty Cunt who was reputed to turn between forty and fifty tricks each night near the Brooklyn Navy Yard, at $1 each.

She explained, I get myself arranged I’d lay up in a room, serve cunt. Those seamen couldn’t tell the difference.

Mama Sutton, a madam from Brooklyn connected with the famous scandal involving several Senators that got into the papers.

A queen from New Mexico. Padric also loved her, but never remembered her name.

Miss Katie Hepburn, a black girl who would sometimes be so desperate she’d do it for five cents

Kay Francis, a Swedish muscle-bound queen who looked like a longshoreman.

Christmas: Padric was sixteen. His entire block was moving boulders across a big field. It began to snow. Padric began to cry. Miss Francis noticed the tears, pressed Padric’s head against her flat chest and crushed him with her big, brawny arms covered with tattoos. Padric sobbed but he didn’t know why.

Miss Francis crooned, There, there honey. It won’t always be this bad.

All winter they moved dirty boulders. Miss Scarlet, Miss Angel, Padric, and all the girls.