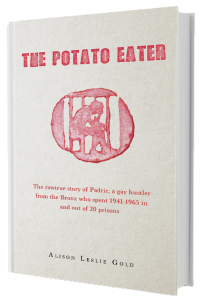 FROM AN AUDIO TAPE MADE IN 1977 IN NEW YORK CITY: “I was 16 when I was arrested for corrupting the morals of soldiers and sailors, blocking a public doorway, and disturbing the peace. In prison I began to grow up and learn. I learned how to pick pockets, how to open five kinds of safes, how to forge checks, how to work second story, how to boost. We’d practice there. I learned all the necessary things to spend 20 more years in different prisons. Riker’s Island was my Junior High School. Sing Sing and Dannemora State were my High Schools. The chain gang and Leavenworth were my colleges. Immediately I had ‘Homosexual, Degenerate, Cock Sucker’ stamped on my records so I was rarely in population with the rest of the men. I was kept in segregation with junkie queens, wino queens, booster queens, prick peddlers, drag queens and some men who just preferred to be in the homo block where they were adored and given sexual comfort. Life in segregation with those mad sissies was like being caged with a mass of mad, screaming peacocks.”

Sign up to be notified when the book is out!