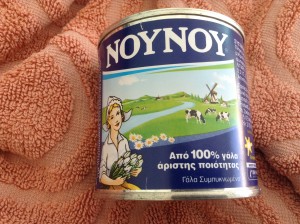 If you dropped your wallet in the central square, it would still be there the following day; untouched, including contents.

Someone I haven’t seen in years sits at the next café table. Without fanfare, we resume a conversation begun in 1985.

A bakery, once new, is known as the Old New Bakery. The more recent, the New Bakery.

The label on the tinned milk, Noy Noy (pronounced new-new), was somewhat different before the socialists were elected, in the 80s. Then: one of the milkmaid’s breasts was exposed so the plump baby in her arms could happily nurse, also, one of the smaller cows lay contentedly on its side in the green grass. Alterations: the baby was replaced by an armload of white tulips, the breast covered over by a white blouse and the cow got to its feet. (see photo) I don’t know if the label’s redesign had anything to do with the changes in political situation.

Roosters do not abide by any rules when they crow and do so all day long.

I buy paint by number from the hardware shop. My kitchen floor is #26. My small bedroom floor is #62. My large bedroom floor is a mix of two parts #21 and one part #26. My windows and shutters are one part #38 mixed with one part white. My interior kitchen doors/windows are yellow #18.

A mangy, feral car with a crushed foot appears at my door like clockwork year after year somehow knowing that I’ve arrived, meowing hoarsely, insisting I feed her. I do. I’ve tried to love her but have failed. She’s called Olympia (O-lymp-pia).

There’s a cemetery in the hills with a view of the sea. This is where my great friend Lily rests. I visit bringing news good and bad, wine and/or coffee, my latest publication (if there is one) for a critique, flowers and/or fresh bread. We wile away the day. Lily’s conversation, even in death, is lyrical ‘flight of idea’ spoken in four or five different languages, sometimes at the same time.

Sparrows jabber at sunrise and again at sunset.

Summer guests and visitors have haphazardly mixed books with red spines and those that are blue, black or green. My Virgo pal who whitewashes the house, finds discarded junk that he refashions into bookcases then paints glossy white, will be furious when he sees that his careful color-code has been altered.

The sea is so salty and buoyant that my son (age five) walked boldly in and swam having had no previous experience. Even on the hottest day, if you can find a bit of shade, a breeze will always cool you. Also, Lily taught me, this same breeze will keep a watermelon cooler outside a refrigerator than in.