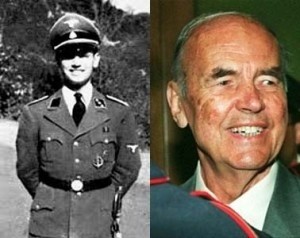 I received the following a while ago:

We grand- and great-grandchildren of Holocaust survivors would like you as someone we consider one of a dwindling number of guardians of our memories to know that former SS Hauptstormfuther Erich Priebke died a few days ago. He was 100 years old and was the oldest known Nazi war criminal. If you are not familiar with Erich Priebke by name, he was convicted of war crimes that included the reprisal slaughter of Italian boys, men, Jews in the Roman Ardeatine Caves in 1944 and was extradited from Argentina to Italy. He has been refused burial in his hometown of Hennigsdorf in Germany, also in his adopted country of exile, Argentina, and most satisfying, in Italy by the Pope himself. We ancestors of Holocaust survivors connected through social media having much in common like grandparents and parents with tattered psyches, soured souls, insecure child-rearing skills, though unvindicated, are elated. May Priebke’s remains never find a final resting place! Even if we have to hold our noses evermore, let his soul unendingly circle eternity’s drain. My reason for writing is to inquire if perhaps you might write a few words for our website on this?

Yours with an iron memory,

Before I could respond I received a P.S.:

P.S. To update you, unrepentant Priebke has been buried after all! Disregarding the Pope’s wishes, a priest connected to the Society of St. Plus X (SSPX) arranged for a funeral in Albano Laziale, Italy but, before the coffin could be lowered into the ground, riots broke out between pro and anti-fascists and the coffin was impounded by officials. Where it was taken is unknown and we’ve been told that the burial place will forever evermore remains secret. A small consolation, but consoling nonetheless.  T.P.

« The itch needs scratching » Why we need schmaltz