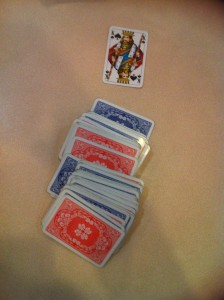 Seeing flinty dawn through a porthole, I left my cabin for a cup of coffee. It was November 2013; I was traveling from Patras to Venice on a ship named Coraggio (Anek Lines) with two new friends. A few Turkish truckers and their wives were fast asleep in the lounge where the configuration of classic red and blue playing cards along with the King of Spades had been abandoned on an otherwise empty, round formica table. Hearing the sound keee-oh cawww and seeing a lone seagull floating on an airwave beside the ship, the cards were forgotten in order to go outside to the deck to lean on a railing, sip my strong coffee and await the first heart-stopping glimpse of Venice emerging from the morning mist.

In childhood I played many card games and not just on rainy days. I played War, Go Fish, Blackjack, Crazy Eights, Poker, Gin Rummy, Twenty-one, Solitaire; I was extremely competitive and always played to win. Once I was told to keep someone who had escaped from a mental hospital busy until an ambulance arrived to take her away. I was too young (about age 6) to be upset, and we two (she was about 60), genially played Canasta, though I’d never played it before or since. At some point I no longer enjoyed card playing. Though I gleefully had also performed many card tricks, this activity exited too. From then on till now (except for playing a game with dice for drinks we called Pig and Chicken at a particular bar/restaurant on 88th Street where I spent many hundreds of hours in a large booth with a changing variety of playmates), any joy or compulsive behavior associated with cards or games in general faded entirely and has never returned. Nor have I ever had any interest in or taste for gambling – a good fortune that at least one vice has alluded me.

Someone recently told me, “My husband is going to a casino in central Asia.” I enquired, “Tibet?” and was huffily informed, “Of course, why else would he go!” Unfortunately, as a non-gambler, non-gamer, non-card player, non-competive being, I was the wrong person for this quip. Even worse, when I hear, “Don’t worry, it’s in the cards.” I can only explain wistfully, “Not in my cards. I’ve none.”

« Conversions, from and to » Unimagined