Addendum to: Blog posting from 16 May 2017 on poet Naomi Replansky 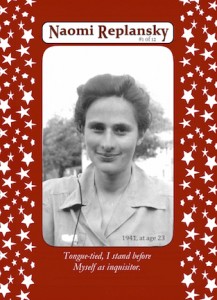 Today I read that poet Naomi Replansky died  on 7 January at age 104. Such a long long life. But, still, her passing shocks and leaves me with an ache.

Following (in part) lines from her poem THE OASIS –

I thought I held a fruit cupped in my hand

And loosed its fruit. After long traveling.

After so long a thirst,

I asked myself: is this a drought-born dream?

It was no dream.

The rain poured down. The separate umbrellas my singer/songwriter friend and I held over our individual heads didn’t shield us from getting wet, wetter, wettest. We were in a part of town I rarely visit these days. Splashing across 109th Street from the subway at Central Park West we turned up Broadway where we passed corners that pierced all but forgotten memory clusters. 109th and Broadway: An amorous (bold) encounter in a walk-up when I was twenty from which I couldn’t escape fast enough. 110th Street and Broadway: One of my first jobs (age thirty-two) as enthusiastic apprentice/assistant to a documentary filmmaker (Phyllis Chinlund) in a large residential building on that corner. Each day I’d get my son off to New Lincoln School then dash for the 57th Street crosstown bus to Madison and transfer to the uptown Madison Avenue bus. Once, during a transit strike, I peddled my folding bike up and back home from my job working at a flatbed Steenbeck editing machine, trying to keep the various plates straight, reconstituting trims. 112th and Broadway: On a second floor, (I think it was there), a favorite dirt cheap Cuban-‘Chinese restaurant were one could sit for hours – eat, read, gab.

At 113th Street my wet friend and I were relieved to reach our destination and get out of the rain.

The occasion was a reading by the poet Naomi Raplansky. For some reason libraries still smell the same as they always have and are, as ever, slightly overheated. So it was at the Morningside Heights Library. Only a few folks including the poet and her long-time companion, Eva Kollish (scholar and author), had arrived. In the basement room we met up with another friend (Barbara Lapcek) who’d saved seats – second row center. I pealed off my soaked jacket, realizing I was wet under it too; stowed my umbrella. Small puddles of water began gathering beneath my chair. As it turned out, we’d been lucky, since attendees trickled, then poured, then squeezed in; standing room only. For the next forty-five minutes Naomi delivered about twenty-five poems with a few off-the-cuff words thrown in. She declaimed rather than recited her spare and careful compositions, some quite brief, like:

crowd out the black

Not one of them

From five hundred miles away

the crumpling of a pillow

She reminded me of my Aunt Dorothy (see Lost and Found), both stalwart (loyal, hardworking, unwavering, tough, independent) woman who’d grown up in poverty, Dorothy in Brooklyn, Naomi in the Bronx during the Great Depression, children of eastern European Jewish immigrants. There was never enough and neither ever learned how to swim. In other words, Naomi could have been a relative; her manner, tone, concerns were comforting and familiar. With these familiarities came an ache for those long gone family members brimming with personality who’d been toughened by fate and would never again walk through my doorway carrying a paper bag full of still-warm bread.  Saying it all, Naomi’s poem, You Walked a Crooked Mile –

You walked a crooked mile

you smiled a crooked smile

you dropped a wandering tear

all in a crooked year

When there was one kiss

And you turned no corner

and against ten cannon

you had one fist

and against ten winters

you had one fire.

After the last poem ended, a standing ovation, then a cake with burning candles was brought as it was Naomi’s ninety-ninth birthday. She blew out the candles, her thick white hair billowing, a wide smile on her fully alive face.

Back outside the rain continued pouring down. Maybe even worse than before. My (also white) hair dripping wet, was plastered to my scalp.

Collected Poems of Naomi Replansky is available on Amazon and elsewhere. The book and the poet are described as follows on the site: ‘Nominated for the National Book Award in 1952, Naomi Replansky’s first book Ring Song dazzled critics with its candor and freshness of language. Here at long last is the new and collected work of a lifetime by a writer hailed as “one of the most brilliant American poets” by George Oppen. Replansky is a poet whose verse combines the compression of Emily Dickinson, the passion of Anna Akhmatova, and the music of W.H. Auden. These poems, which Marie Ponsot calls “sixty years of a free woman’s song,” are Replansky’s hymns to the struggle for justice and equality and to the enduring beauty of life in our dangerous world.’

I strongly suggest reading her poetry and receiving the blessing Naomi has on offer.