The best of times – Laughing Water 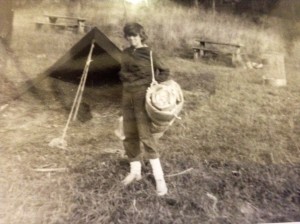 This photo depicts someone who looks like they wandered onto a Civil War battlefield. Or, an extra from Grapes of Wrath. Not so. It happens to be me at about age 11 or 12 at sleep-away camp.

For about 5 years, every August 1, I was taken to the Port Authority Bus Station and put on a bus by my parents. I doubt I looked back or waved goodbye. I was going to Girl Scout Camp–at last– after waiting an entire year for the day to arrive once more. The bus was headed upstate to Bear Mountain where I would spend an entire month at Camp Laughing Water sleeping in the woods on a cot in a tent that had a plank floor. I shared my tent with 4 other girls who I’d never met before, our suitcases under our cots while personal items (like shampoo, toothbrush, folding cup) were kept in a shared unpainted orange crate. The off-white canvas tent had sides that hung down when it rained but remained rolled up most of the time, day and night, allowing us to sleep in the open air a few inches from the trees and woods. One time I woke suddenly. A deer was standing not two feet from my face. My heart raced while we looked into each others eyes and I felt the closest I’d ever felt to euphoria in my life up to this point.

I’ve only done 3 things really well in life. (I’m not kidding or being modest.) One of these was being a camper. This meant that while I was preparing to take my Life Saving tests I studied under my blanket with a flashlight every night, something I’d never done before or since, and got a perfect score. I could build many kinds of fires, do canoe-over-canoe rescues, identify Poison Ivy, make a bed roll, say the Conservation Pledge. (I give my pledge as an American to save and faithfully to defend from waste the natural resources of my country–its soil and minerals, its forests, waters, and wildlife.) I could whip the end of a rope, lash things together when nails or hammers weren’t handy, cook a Doughboy over an open fire on the end of a sharpened green stick. And much more. I was never again as happy or carefree as I was during those times.

On the bus coming and going we’d sing. We also sang while hiking, canoeing or sitting around the camp fire. We sang all the time. It didn’t matter if you had a good voice or any musical sense whatsoever. I don’t recall a single person, camper or counselor, not joining in. And, no matter how many times we sang the same song, I never tired of it.

One song we sang about a million times:

Bed is too small for my tired head,

give me a hill topped with trees;

Tuck a cloud under my chin,

Lord, blow the moon out, please