In its literature, the Carole Lombard Savoy Home for Mature Adults is described as ‘nestled within’ four acres of tended grounds planted with bougainvillea, queen palms and eucalyptus. It’s in sight of the Santa Ana (California) Mountains and a ‘hop, skip and a jump’ from the birthplace and library of Richard Nixon. To residents with mobility it offers aqua aerobics classes, a red clay mud pool. It provides hotel style lunch and dinner in a ‘waitress-served’ dining room, also linen service, weekly housekeeping, a beauty salon/barber shop, library, solarium and shaded garden for its guests. Tai chi and bingo are offered without extra cost. Folded into the home for those with less mobility is a ‘subacute’ care center as well as a ‘swallowing center.’

A November issue of the monthly newsletter The Carole Crier announced:

Performance: If you ask where did the good

times go, the answer is that they have not gone.

Though she rarely entertains, Patty Andrews

of The Andrews Sisters, will perform.

The woman who had been unmasked was Patty Andrews and happened to be (at the time) the only surviving Andrew sister. She was there receiving steroid injections to treat various pains as she had been diagnosed with four problems: Spinal Stenosis, Scoliosis, Osteoporosis and Kyphosia. Patty had not entertained since she was asked to by the State Department when ‘mission accomplished’ had been definitively declared (about the Iraq War) by the then president. She had accepted and was air-lifted to Edwards Air Force Base less than twenty minutes away where she insisted on leaving her walker backstage. She sang two chorus’ of Quicksilver though Boogie Woogie Bugle Boy had been requested. Those who remembered her singing style were surprised by the sweetness in the voice though the famous brassy energy had mellowed with time.

For the November 20th performance she again planned to leave her walker outside the day room in which a small bunting-decorated the stage. On the stage, a microphone and piano. Mary Gail was the member of the staff that conducted interviews with residents and visitors. After condensing these interviews to 250 words, they were printed on the back page of The Carole Crier. Mary Gail also wrote short human interest pieces, death notices and poems that filled all four pages of The Carole Crier. She was its entire editorial staff. Additionally, Mary Gail played piano for the residents during the afternoon in the dayroom. And … before breakfast, she offered to practices reflexology on anyone who asked. Having graduated from Orange County Junior College with an Associates Degree the previous May, she had gotten the job in July. Mary Gail was twenty.

Patty had requested the interview take place after dinner. This caused a dilemma since Mary’s workday was supposed to end at 4:30. Eager to please, though there was no chance she would receive overtime pay, she agreed. Not knowing who Patty Andrews was, Mary googled her three weeks before the date of the concert while she slathered butter and mustard onto two waffles. Goggle suggests Wikipedia. Not sure how to proceed, Mary fried an egg to top her evening veggie patty. She then downsized by squeezing the egg/veggie patty between the two waffles already softened with condiments.

Once she had eaten, she removed her contact lenses. These lenses gave her pale blue eyes a lavender cast. She stretched out on the percale Wild Safari Quilt with appliquéd lions, elephants, zebras and tigers, leaning against the wedge-shaped ‘Reader’s Pillow’ that included a neck roll filled with memory foam meant to conform to her head and neck. She called her mother in Orange County to ask about the singer named Patty Andrews.

Heather Gail was forty-two. Off the top of her head Heather admitted she couldn’t place the name. She asked for the titles of a few of Patty Andrews songs. Mary read some of the names from Wikipedia. Hearing Boogie Woogie Bugle Boy, Heather got excited and told her daughter, I think you’re confusing her with a singer my mother adored, whose songs she played when I was small. Boogie Woogie Bugle Boy was one. Bette something.

Mary had heard of an old timey Bette Davis, also a Bette Midler, and made a note to google them too.

“Ever hear of Six Jerks in a Jeep That Leaps?

“Jerk as in jiggle?”

Before turning off her nightlight, Mary multiplied a few fractions and then divided them. Doing math was the new alternative to yoga though she was not sure if these mental gymnastics were helping or hurting her often taxed and frazzled mind.

To melt the ice, on the day of the interview, Mary Gail brought two frothy café latte’s with her to Patty’s room that was the corner room on the second floor of the Clark Gable Wing. She let herself into the unlocked door and saw a young-looking old woman with tweezed eyebrows sitting in a red leather wing chair.

“I’m the editor of the newsletter.”

“I don’t get around much anymore.”

“Would you mind if I ask you a few questions.”

“Is it true that you and your sisters helped win the war?”

Patty realized that Mary was not easy to amuse. Mary handed over the cardboard cup and Patty took a sip

“Now about the war, we didn’t always have coffee during the war.”

“Did you ever meet President Nixon?”

“No, but I once met Casper Whatshisname, a ghost.”

Was she joking? Mary wondered

“I see you can see. I can too. Perhaps not 20/20 but I can see enough to know that your eyes are lavender.”

“Your sister Maxene was quoted as saying ‘I have nothing to regret. We got on the carousel and we each got the gold ring and I was satisfied with that. There’s nothing I would do to change things if I could.’ Is there anything you’d change?”

“Yes I would. I wish I had the ability and the power to bridge the gap between my sisters. It wasn’t always easy.”

“About the gold. In England the hotel had gold plumbing and towel racks that were heated.”

“About bridging the gap: I try to keep my thoughts to myself or someone who does not share my scruples will steal my big ideas and reap the rewards and applause that should have been mine.” 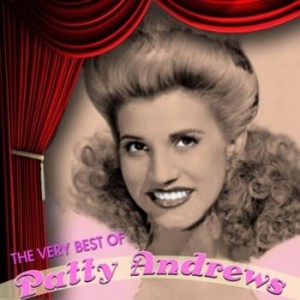 « Empty chairs » A small bite out of my next book