Oct 10, 2020 By Alison Leslie Gold in Interview No Comments 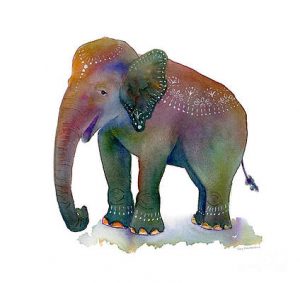 After Darin Elliot (my collaborator on Elephant in the Living Room, whose bright new solo publication Elephant in the Shadows was featured in a recent posting), and I quarantined together for more than ten weeks, he moved on (to upstate New York, then to Boston) for a couple of months but returned in September for a few days before setting off again (for North Carolina). Luckily this short but productive visit coincided with a chance to calm my bookshelves (as only Darin can – color coding and all) and, by happy coincidence, it coincided with an invitation from a delightful podcast –

How fortunate is that!

Hosted by multi-talents Koji Steven Sakai and M. Martin Mapoma from Los Angeles, the format of the podcast is divided in two: First: easy-going, general discussion. Then, second: each invitee is asked to relate either a ‘best’ or a ‘worst’ moment from life, past or present. 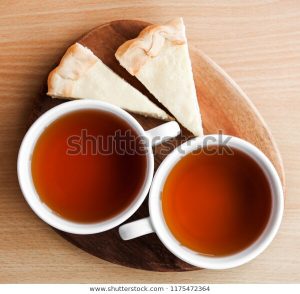 Thus, with my bookshelves neat as whistles, we treated ourselves to slices of satiny NY cheesecake with afternoon tea and began trolling our individual histories for high-, as well as, low-lights. Later we exchanged examples we’d each dredged up. My ‘best’ was simple, doleful; his ‘worst’ was nothing I could have imagined. Here’s what he told me:

A number of years ago my friend Darin took off for one of many trips to India. After spending some months in ancient, temple-strewn (World Heritage Site) Hampi visiting friends on the banks of the Tungabhadra River, he was ready to move on. He packed up his small French military canvas rucksack and stashed the lions-share of savings in a Ziploc bag for safekeeping. His fortune totaled $400, consisting of four $100 bills plus one blank check in case of emergency, more than enough for the final month of his stay. He would often tell new travelers that one could easily (in those days) get by on $100 a month in India. The Ziploc provided a flat, very light, waterproof repository that he would stash inside his shoe if he was to walk in an isolated area. Not that he was wary of getting mugged (since mugging is fairly rare in India) but because he was simply taking care, or perhaps harboring a lingering paranoia he brought with him from the West.
To reach the nearest  railway station in Hospet, he traveled along rocky hills riding on top of a ramshackle bus, sharing its luggage rack with locals and a few hippies. Once the bumpy ride ended it was necessary to make a long walk in the dark along a country road in order to reach the station. Instead of tucking the plastic-wrapped money in his shoe, as usual, he haphazardly slipped it down into his underpants, slips (much like speedos), where it would stay firmly in place and safe. 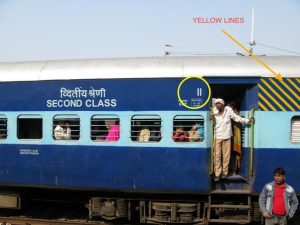 Arriving at the station he boarded the already crowded train with a Waiting List ticket and was successful in claiming his preference, an upper berth, where he could settle in with his small bag for an early rest, as was always his preference. He did feel a little shame-faced, though, having out-maneuvered a young Japanese couple who wanted it too. Disappointed, the couple settled instead for bottom beds in the same Second Class compartment.  The train then left on-time at 10 pm, not surprising as it originated in Hospet and had arrived empty.
Once they were chugging along, he thought it a good idea to brush his teeth and pee as soon as possible. Toothbrush and toothpaste in hand, he navigated his way to the end of the narrow corridor to the area where several toilets were on offer. As always, he chose to use the ‘Indian’ toilet rather than the ‘English’ toilet – though it was a stinky, dirty, grungy hole – as it felt a healthier position, and he liked that he could see the ground going by through the hole. And the ‘English’ toilet wasn’t any cleaner, forcing you to make contact and  sit on a filthy bowl. 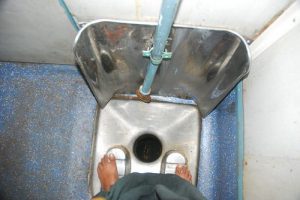 He waited his turn, brushed his teeth (without using any water since Indian water can be undrinkable) spat, then for some reason at that moment he squatted down to pee rather than remain standing. Bladder relieved, he pulled up his underpants and linen trousers.
Now he could look forward to falling asleep to the steady chuff-chuff rumble of the moving train.

Suddenly, like a bolt from the blue, all mellow thoughts disappeared and he was overcome with panic … he had forgotten that he had slipped all his money down his pants! Frantically he ripped pants and underpants back down but the plastic bag was not there! Alarmed, freaked out, he searched the floor around him, took off all his clothes in a mad dash, didn’t see the packet, then realized that it must have gone down the toilet unnoticed when he lowered his pants! Getting down on his knees, out of sheer desperation, he reached an arm’s length down into the shitty hole feeling for the plastic bag. It wasn’t there. In a frenzy now, he dashed to the compartment, and looked everywhere. The others in his compartment were staring at his flustered, frantic movements.
Just then the train came to a stop for no reason – as Indian trains often do. He rushed to the doorway and, in spite of a large gap from the lower step to the ground below, jumped off the train and peered beneath the carriage with his small flashlight, hoping the train’s movement had flung the falling bag against a pipe or protrusion as it fell. Weary that in the dark there he might be mistaken for a terrorist planting a bomb, and sick to his stomach now that he had done something so dumb, and having lost the money he needed for the rest of his journey, he clamored back up into the carriage just as the train began, unannounced, to lunge forward and onward.
All around him people were getting into their beds as he continued to search in panic though he was convinced now that more searching on the train was useless, as it had probably slipped out of his pants when he lowered them to pee, and was now down on the track somewhere … three miles back! He tied up his rucksack and told the Japanese couple he’d elbowed out of the top bunk that they were welcome to it since he was getting off at the next stop. They were thrilled.
Around 11 the train arrived at a station with a long name of five or six syllables. Darin got off, stood on the anonymous platform. Shortly the train chugged away. He watched the lights of the train until they were out of sight, then looked around. It was very dark, and seemed like he was in the middle of nowhere. There didn’t seem to be a village or any people in any direction except, close by, were silhouettes of smokestacks shooting angry flames high up into the sky. It felt to him at that moment that he had disembarked in some version of hell. Other than the ghastly flames and the quivering shadows they cast, it was pitch black.
Digging again for the rinky Indian flashlight from the rucksack, he shined it in every direction. Looking around, he realized there didn’t seem to be any way to get onto the tracks. He left the platform and scrambled down a steep hillside – the flashlight suddenly blinking on and off, as something had gone wrong with the otherwise trusty battery. He stumbled among some odd stone-and-stick protrusions, soon realizing that it was a homemade cemetery. Finally he managed to climb onto the tracks.
In the dim light he saw that the track ahead split apart in a V. He chose the one that seemed right and began walking along it in total darkness except when the faulty flashlight briefly illuminated the tracks. ‘Stupid mistake, then I get off in Hell, have to walk through dead bodies, and now my light won’t shine’, he kept repeating to himself. The symbolism did not elude him. ‘This has got to be some sort of a test!’ he added, and started walking in the direction from which the train had come. 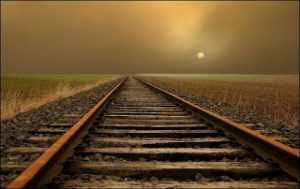 Navigating on the rail-ties was awkward since the spaces between them were too short for proper steps. It was that or carefully balancing along the rails, so he alternated between the two, which became especially daunting at times when the tracks passed over a few rickety bridges. All the while he looked hard through the gloom down at the tracks, hoping against hope he’d spot the Ziploc bag or the cash in case it had fallen from the plastic.
In fact, he was disgusted with himself; that it had come to this. This is why he hated money, look how awful it had made him feel. At that moment he made a pact with the universe: if he found the money he’d give it away to his poor Indian friends back in Hampi. If not, he prayed that someone who really needed it would find it. And with that resolution, he walked for hours and hours through the night, always on the lookout, found nothing, nothing, nothing. 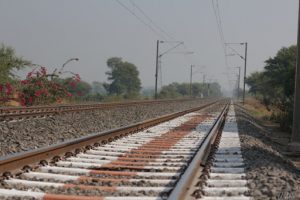 Finally arriving back at Hospet Station just as dawn was breaking, he was exhausted and ashamed with himself. Walking back along the barren dirt road into town, he  used what little cash he had left in his pocket to take an ‘ordinary’ (third class) bus with wooden slat seats the rest of the way to Bangalore, falling asleep amidst the ten-hour journey. 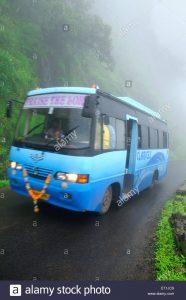 Oddly, looking back, of the fifteen times he’s gone to India for long stays in the last thirty years, that particular trip which provided just about the ‘worst’ experience of his life, was the only time he didn’t get pin worms. Though he kept waiting for the tickle-of-their-presence after he left the country he loved so well, and for months after kept an eye out for the telltale white threads to appear, they never did.

[Better yet, listen to Darin tell his story and discover what Alison remembered when they visit Koji and Martin in two episodes: