My ladder to nowhere and me.

Jul 2, 2015 By Alison Leslie Gold in Personal No Comments 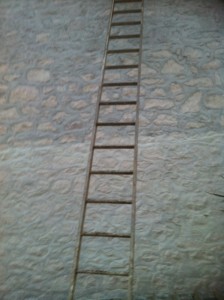 My non arrival in the city of N.

took place on the dot.

in my unmailed letter.

You were able not to be there
at the agreed-upon time.

The train pulled up at Platform 3.
A lot of people got out.

My absence joined the throng
as it made its way toward the exit.

Several women rushed
to take my place
in all that rush.

Somebody ran up to one of them.
I didn’t know him,
but she recognized him
immediately.

While they kissed
with not our lips,
a suitcase disappeared,
not mine.

The railroad station in the city of N.
passed its exam
in objective existence
with flying colors.

The whole remained in place.
Particulars scurried
along the designated tracks.

Even a rendezvous
took place as planned.

Beyond the reach
of our presence.

In the paradise lost
of probability.

– Wislawa Szymborska [Translated from the Polish the by Stanislaw Baranczak and Clare Cavanagh]
Coming up for air. THE POTATO EATER has been launched, the little garden is planted, several important birthday’s have been celebrated, Greece has defaulted, my next book (NOT NOT A JEW) is well underway, my phone is silent. What a great luxury not to have to go anywhere, see anyone, say anything, put on shoes…
« Something to nosh on while reading THE POTATO EATER » Non-Jews can be more Jewish than actual Jews