Nov 4, 2019 By Alison Leslie Gold in Close Encounter No Comments 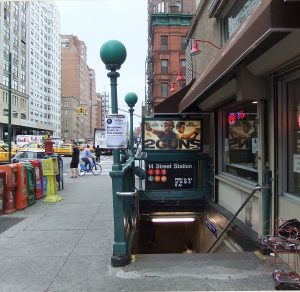 I know. I know. It’s been an awfully long epidemic of  Fold blog postings … dozens, hundreds maybe. I’m well aware that not one reader has responded with any excitement (Oh my poor sad folds!) but do appreciate (well-mannered readers that you are) that not one of you has blasted me either. Not one.  (Oh my poor long suffering readers!) Mea Culpa.  I’ll try and do other.

I should probably mention that Paul Celan crossed my path today. I was walking south on 7th Avenue on the way to meet my sister. His hair was still black but his brow was wrinkled. He commented in passing – “Only truthful hands write true poems. I cannot see any basic difference between a handshake and a poem” I didn’t know if I agreed but, before I could decide, he’d crossed the Avenue against the light and disappeared into the subway entrance. A shame I hadn’t been on the ball … at least to invite him for a drink or a meal or even just to thank him for his work and offer sympathy for the hard life of torment he lived. If I thought this might be a fold-free moment, I was wrong. Paul Celan wrote in “Walking in the Mountains” “..up here the earth is folded over, its folded once and twice and three times and opened up in the middle and in the middle there is some water and the water is green and the green is white and the white comes from up further, from the glaciers … “