Because I spent 20 years writing about WWII and the Holocaust, including two Anne Frank-related books, I never fail to notice Anne Frank’s birthday in June. It’s today. Although the clock has continued to tick for the rest of us, Anne remains frozen in time, evermore a young girl. Despite the passing of vast expanses of time since her diary caught fire around the world, there doesn’t seems to be any end to appearances of Anne Frank-related materials and events. Recently: A play based on Anne’s Diary was performed with puppets in Atlanta, Georgia. Anne’s story as a graphic novel was published. So was a book told from Peter’s point of view (accused of “oversexualizing the young diarist”). A box of Anne’ marbles left behind in Frankfurt in 1933 was rediscovered. Rain and wind finally toppled Anne Frank’s beloved chestnut tree. Even an asteroid (Asteroid 5535 that lies between Mars and Jupiter Asteroid) has been named for her: Asteroid 5535 Anne Frank.

Pictured here is Anne attending Miep and Jan Gieses wedding on July 16, 1941 outside Amsterdam Town Hall. “Because Margot Frank and Mrs. Frank’s mother were both sick, Mrs. Frank had stayed home to care for them. Anne and Mr. Frank arrived together. Mr. Frank looked handsome in his dark suit and hat. Anne looked very grown-up indeed with her princess-style coat and matching cloche hat with a ribbon around the brim. Anne’s hair had got longer, and it looked shiny and full from brushing.” These lines are from the book Miep Gies and I wrote with the help of Miep’s husband: Anne Frank Remembered.

Miep and her husband, Jan, helped to hide Anne and her family from the Nazis for 25 months. Anne’s impish smile in this photo might have something to do with the fact that even though the German’s already occupied Holland and the noose around Jewish necks was beginning to tighten, this wedding party had put a fast one over on the Nazis. You see, Miep was originally from Vienna. She had refused to join a Nazi Girls Club. Because of this, her passport had been invalidated and she was threatened with deportation back 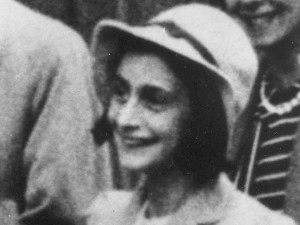 to Nazi ruled Austria. The last place on earth she wanted to go. Against all odds, she had been able to marry Jan, a Dutchman, that day, had thus become Dutch, and, as a Dutch woman was able to thwart the iron will of their mutual oppressors, a cause for glee felt by all at the wedding, memorialized by Anne’s infectious smile.

During the years of my friendship and collaboration with Miep (who lived to age almost to 101) Miep several times described the following to me: Every time she and Jan were invited to see a stage play of the “Diary of Anne Frank” when it was performed in the Netherlands, just before the curtain was to go up, she would find herself thinking about Anne and the others: Maybe this time things will end differently. Maybe this time when the play ends they’ll live. But every time when the curtain would fall, her heart would sink because the play always ended the same way.

A Planetoide is a small planet-like celestial body orbiting a star. Recently, one was christened Planetoide Miep Gies. Every night Asteroid 5535 Anne Frank and Planetoide Miep Gies are glinting in the heavens. Also tonight on the anniversary of the birth of Anneliese Marie Frank born in Frankfurt, Germany in 1929. Eighty-six years ago.

« For the next course » … and I highly recommend!