Revisiting “The Cranes of Flying”

Jul 20, 2019 By Alison Leslie Gold in Reunions No Comments

The small town of Little Neck on the Great South Bay is the original home of the Matinecock Indian, also the namesake for a small, hard clam essential to linguine alle vongole. In 1957, when a gallon of gas cost twenty-four cents, a postage stamp five cents, I was a twelve year old nail gnawing not-so-secret smoker with a twisted front tooth soon to be encircled with unpleasant, ever-tightening metal wire. I would be sitting alongside my father, the driver, in our Nash Rambler’s with the blue and silver seat covers. We were off to the Little Neck Movie Theater around five miles from our home. (A sibling or two might have been with us, I do not recall.) Unusual for the times, it was a movie house with an Art Deco facade that occasionally slipped an “art” film (referred to as a “foreign” film by my father) into their repertoire. He was mad for “foreign” films, especially those made in Japan.

With an elbow resting on the open window frame, a Kool cigarette between his fingers, one hand on the steering wheel, it was a simple trip east on well-worn Northern Boulevard with one hand only on the steering wheel. We traveled on the pre-LIRR, main east/west thoroughfare also used by Jay Gatsby in The Great Gatsby. En route we’d pass close to where the Throgs Neck Bridge would one day arch. My youthful, mid-thirties, college professor father wore glasses with colorless frames. My mother had been cutting his springy black hair in a short flattop style for several years now. He surely was my nail-biting role model though he gnawed his so far below the quick that it hurt to look at them.

The Rambler parked in front (where one was able to park in those days), we’d have stocked up on salty popcorn, maybe a box of Dot gumdrops too, then would have grabbed seats in the loge where smoking was permitted. When the lights were lowered, a gauzy scrim of cigarette smoke would be adrift in the projector’s beams above us. My father had introduced us (we were four) kids to the likes of Kurosawa, Bergman, Buñuel and others including an occasional export from our arch cold war rival who’d recently launched a satellite called Sputnik. While most of the content of these films has not traveled with me in time, I do remember floods of tears and that two of these Soviet-made films have been stuck in my throat since then – “The Cranes Are Flying” (directed by Mikhail Kalatozov) and “Ballad of a Soldier” (directed by Grigori Chukhrai). Story line and actors aside, like gusts of very fresh air, these films had blown across the Cold War divide and shaken my hand. Within my left-leaning, politically ignorant heart, the anti-war themes they conveyed carved notches into the soft clay of my burgeoning scruples.

Sixty-two years later, in an atmosphere of national sourness and fading mass memory, I was given the chance to revisit one of these childhood icons and to refresh my faded memory when the 1957 masterwork “The Cranes are Flying” visited the grotty but high-brow Film Forum on west Houston Street across from the Village Nursing Home. My birthday fell on a burning-hot Saturday (July 13th) this year. I hadn’t planned to celebrated but changed my mind in order to see the film. I met my great friend Dixie in the lobby, got coffee, water too. Made late by irregular subway service from Brooklyn, another friend (Hannah) joined us in the sixth row, stage left, cardboard coffee in hand, just as the theater lights dimmed. Without fanfare or previews, faded grey titles accompanied Mieczyslaw Weinberg’s airy title music – accordions, winds, violins. Following this, appeared an establishing shot of a deserted bridge on which we witness two earthy people in the midst of an amorous early morning romp in stark, mood-making black and white. The affability of the couple quickly drew me to them, spirited Boris (Aleksey Batalov), his breathtaking ripe love, Veronika (Tatiana Samoilova). 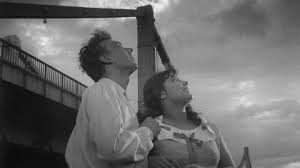 After scampering along the Bolshoy Moskvoretsky Bridge, they moved from the bridge to the embankment of the Moskva River, skipping, embracing, twirling until a street sprinkler truck passes, spewing geyser’s of silvery spray. Not daunted, they laugh, dry each other’s hair, and gaze upward at the friendly sky that’s decorated with puffy, eatable clouds. Their eyes (and mine) follow a flock of long-legged cranes (with outstretched napes of necks) sweeping across the sky’s vastness in wedge-shaped “V” formation.

I’m ensnared, though surprised that I recall none of the plot from long-ago. How could I have forgotten? The lovers love. War comes. With war, cataclysm. For two plus hours miseries mount as I hope against hope that tragedy can be averted. It’s not. Presented with all-encompassing devastation, we witness how war pollutes each and every being in the film. Finally the war comes to an end, victorious (albeit battered) survivors return to Moscow. Boris is dead. Veronika must now live without her great love. A brace of cranes once again cross the sky in a lazy “V” as hot tears fog my glasses and spool across my face. They feel like newly freed fugitives or absent friends who, out of nowhere, ring my doorbell. 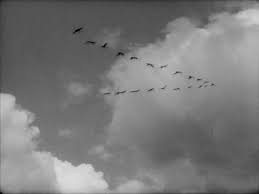