a new film in the works 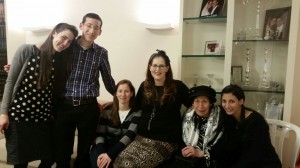 A story close to my heart! A fine filmmaker in Salt Lake City, Sally Meyer, is raising money in order to make a short film about friendship, and how it transcends time and even death. The subjects are Hannah Goslar and Anne Frank, best friends in childhood, separated by war, who briefly met again in Bergen Belsen death camp in the final days of Anne’s life. I wrote about this friendship in my book for middle school-age readers — Memories of Anne Frank, Reflections of a Childhood Friend – translated into 20 languages. I strongly urge anyone with a a little money to spare to click the link above and support this project  as I am.

Hannah Pick-Goslar, in the photo, survived the war and has lived a long, rich life in Israel. She is surrounded by children and grandchildren in 2015 but at heart is the same sweet soul as seen in the photo on the cover of my book. We see Hannah and Anne in the 1930s on the streets of their neighborhood of South Amsterdam, neither having any idea of the unkind future that awaits them.

Below: All about Sally Meyer’s film.

Hanneli and Anne – Their true story
Salt Lake City, Utah, United States Film’HANNELI AND ANNE’ IS A DOCUDRAMA DEPICTING THE TRUE STORY OF HANNAH-PICK GOSLAR AND

ANNE FRANK AND HOW THEIR FRIENDSHIP SURVIVED THE HORRORS OF THE HOLOCAUST. (Short Film)

Hanneli and Anne tells the true story of Hannah (Hanneli) Pick-Goslar and her friendship with Anne Frank. Best friends since kindergarten, Hanneli and Anne grew up together in Amsterdam. In 1940, when Holland was invaded by the Nazis, Hanneli and Anne had no idea that their lives were going to change forever.

In the summer of 1942, Anne and her family were forced into hiding and Hanneli was told that the Frank family had fled to Switzerland, and the best friends were abruptly parted.

In June, 1943, Hanneli and her surviving family were sent to a camp in Westerbork, northeastern Holland, where they were prisoners until they were transported to Bergen Belsen, Alballalager, a ‘privileged camp’ in February, 1944.

In November of 1944, thousands of new inmates arrived at Bergen-Belsen. Alballalager was divided down the middle by barbed wire covered with straw to keep the camp separated. The penalty for talking to prisoners on the other side of the barbed wire was death.

In February, 1945, Hanneli finds out that her dear friend, Anne, is on the other side of the fence, and not in Switzerland, as she previously thought.

When darkness falls, she approaches the high fence, and by a miracle, she is able to make contact with Anne.

Even though they cannot see each other because of the straw, they meet at the fence three times, risking their lives to share precious moments together. Hanneli brings food for Anne to the fence, in hopes of supplying a means to keep Anne alive. The first attempt fails when another prisoner snatches the food from Anne and runs away. After Hanneli receives two package from the Red Cross, she takes one package to Anne. This time she is able to get the precious food and a pair of socks to Anne.

Hanneli and her sister Gabi survived the horrors of Bergen Belsen, and eventually, with the help of Anne’s father, Otto Frank, emigrated to Jerusalem in 1947.

Hannah still lives in Jerusalem, she has three children and many grandchildren.

This is her story of courage and loyalty, which shows that in spite of everything, we can keep our humanity and love towards others.

Why I Want the World to Know Hannah’s Story

When I first read the story of Hannah Pick-Goslar, I was touched and amazed. How could Hanneli, just a young girl, do what she did – to keep her little sister, Gabi safe and to share food with a friend at the risk of her life.

Hanneli suffered much, she lost her parents and her grandparents, and yet had the courage and grit to keep going, despite her awful circumstances, so she could keep her little sister Gabi alive.

When I learned of Hanneli’s further charity and courage as she risked her life to meet Anne at fence in Bergen Belsen, I knew I had to write the story in script form. The story remained in the back of my mind, and every so often, came to the forefront. I eventually realized that I had to make this story into a short film. Running time will be about 20 minutes.

Obtaining Hannah’s Personal Blessing to Bring Her Story to Life

I was also able to contact Hannah, through the gracious help of Alison Leslie Gold, a good friend of Hannah, who wrote the book ‘Memories of Anne Frank. Reflections of a Childhood Friend’. This book is a beautiful tribute to Hannah, and I highly recommend it.

In February of 2015, exactly 70 years from the time that Hannah was liberated with her sister Gabi from Bergen Belsen, she granted us an interview at her apartment in Jerusalem.

We extend a special thanks to Steve Linde, Editor in Chief of the Jerusalem Post, and Eli Mandelbaum, Journalist and Photographer at YNET, who were instrumental in securing the interview in Israel with Hannah.

The live interview with Hannah will allow you also to get to know her and to see why this story must be told. We will be releasing small snippets of the interview during this campaign. The full interview will be available after the film is completed.

Hannah’s message is of love and tolerance for all people, no matter race, creed or religion.

I’m thrilled to co-direct this film with my Five One Films partner, Ali Barr. Without her I would not have the courage to make this film. Her vision matches mine and our goal is to create a beautiful film, to honor Hannah and Anne and all the innocents who were subjected to the atrocities of the Holocaust.

I am delighted to work with Ali and Stephanie Broschinsky as producers of the film.
The Diary of Anne Frank

We have secured permission from the Anne Frank Fonds (Foundation) in Basel Switzerland to use text from the famous diary of Anne Frank. Her words speak just as loudly today as they did seventy years ago. “In spite of everything, I still believe that people are really good at heart”. (Anne Frank)

Our goal is to make the film in honor of Hannah and her courage. We will enter it into film festivals and hope to get this film into schools, so that students all over the film will know Hannah’s story.

We need your contribution to make the film, will you join hands with us and share Hanneli’s story?
Thank you.