Excerpt from Part V – “A Rising Urge to Strangle Someone” – The Woman Who …..

Mar 5, 2015 By Alison Leslie Gold in The Woman Who Brought Matisse Back From the Dead No Comments 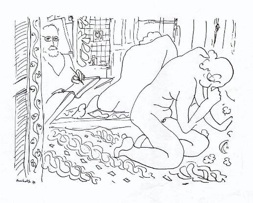 Though the widow bird’s plumage was black, Matisse had never warmed to it as he had his pigeon that was as white as bleached bone. It was a miracle that they had made it back to Cimiez. He was ashamed that he needed two nurses to accompany him on the train. Between the nurses, the housekeeper, the cook, Madam Lydia, crates of work, valises, trunks, bolts of cloth, he and his entourage took up an entire Portman. Once back in Cimiez, he resumed his normal life, saw friends, wrote letters to his children. Whenever his wife came up in conversation, he was taken by an overwhelming feeling of fatigue mixed with guilt mixed with longing. Hearing or saying her name brought on the sensation of fainting, which was what he did at one point when Amélie was mentioned just after the pigeon flew across the room.

When he opened his eyes he saw Lydia’s face and the pang of Amélia caught in his chest. Lydia still had fair hair. Like Amélie, every single model and woman in his life had been dark. It was the exotic, the dark, that interested him, had always interested him. Lydia was the exception. She held the cigarette away from her face between thumb and forefinger as a conductor would a baton. The mandarin orange-colored drapes had been drawn. Someone must have drawn them after he lost consciousness.

She took a final draw, let out a whip of mustard-yellow smoke, put out the cigarette in the saucer of a teacup that was on his nightstand. They must have had tea, but he could not remember. Lydia pulled the chair up beside him, sat down and flipped the duvet away from his feet. This time her hands were burning hot on his cold feet as she rubbed the ball of each foot with each of her thumbs. The leg cramps were eased by the massage. He whispered anxiously, “If I close my eyes, maybe I’ll never open them again? Wouldn’t you think that Amélie would want to see me one more time?”

Against his will, his eyelids drooped and he dozed, but, sleep was, as always, elusive. After an interval he became pensive.

“What was it that Brancusi said about the color blue – ‘… the sky that men believe to be blue is not. It is black beyond.’ Something like that. My first love affair with the color blue was the dots my mother made on porcelain vases and bowls. Young as I was at the time, my dark mother let me stir paint while she decorated those porcelains with various lines and patterns and dots.”

« Excerpt from Part IV — “Last Supper” — The Woman Who Brought Matisse …. » Final excerpt – From Part V – “A Rising Urge to Strangle Someone” – The Woman Who …