Feb 15, 2015 By Alison Leslie Gold in Anne Frank No Comments 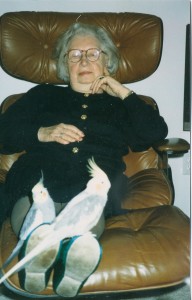 Not very long ago, Miep Gies rested on this chair in my living room. As she contemplated my cockatiels, Fanny and Puccini, they contemplated her. Her iconic deeds were behind her and old, old, oldest age (she lived almost to age 101) lay ahead. Because of her indelible association with Anne Frank and World War II Holland, most would be surprised to know that she was not originally Dutch. Following is an extract from our book ANNE FRANK REMEMBERED in which she describes the journey she took in order to fulfill her destiny:

But Amsterdam was not my native city. I had been born in Vienna, Austria, in 1909. When I was five years old, the First World War began. We children had no way of knowing that the war had begun except that one day we heard soldiers marching in the street. I remember feeling great excitement, and I ran out alone to take a look. I was aware of uniforms, equipment, and many emotional displays between people.To get a better look, I ran between the marching men and horses. A man from the fire brigade grabbed me, hoisted me into his arms, and carried me home, as I craned my neck to see more.

In Vienna, there were old buildings, not in good condition, built around central courtyards and broken up into many apartments filled with working people. The man from the fire brigade returned me to my anxious mother and left. My mother told me gravely, “There are soldiers in the streets. It’s not safe. Don’t go out there.”

…I was not the strongest child, and because of the serious food shortages during the war, I had become undernourished and sick…. My legs were sticks dominated by bony kneecaps. My teeth were soft…. My condition was worsening, and my parents were told that something had to be done or I would die.

Because of a program that had been set up by foreign working people for hungry Austrian children, a plan was devised that might rescue me from my fate… It was winter — always bitter in Vienna — December 1920, and I was bundled up in whatever my parents could find and taken to the cavernous Vienna railway station. There we waited long, tiring hours, during which we were joined by many other sickly children. … A card was hung around my neck. On it was printed a strange name, the name of people I had never met.

The train was filled with many children like me, all with cards around their necks. Suddenly the faces of my parents were no longer there and the train had begun to move. All the children were scared and apprehensive, some were crying. Most of us had never been outside our street, certainly never outside Vienna.I felt too weak to observe much, but found the chugging motion of the train made me sleepy. I slept and woke. The trip went on and on and on.

It was pitch-black, the middle of the night, when the train stopped and we were shaken awake and led off the train. The sign beside the still steaming train read Leiden.

This eleven year old half-starved German-speaking girl’s birth name was Hermine Santrouschitz. While she was being fed and cared for, she began to learn to speak the Dutch language and, quite soon, acquired a common Dutch nickname — Miep.

« Remembering Cyla and Simon Wiesenthal on Valentine’s Day » Excerpt from Part III — “In Paradisum” — The Woman Who ….