Feb 13, 2015 By Alison Leslie Gold in Book, The Woman Who Brought Matisse Back From the Dead No Comments

The taxi drove along Lexington Avenue to 42nd Street. His mother had always spoken about Justina as an angel. No photo of Justina survived. No photo of anything, even his mother and father’s wedding, had survived World War I. Julia’s descriptions of Justina had varied so much during the years that he could not help but wonder if Claude was like Justina in some way. There was no other way to explain his mother’s attachment since Julia had not made one other friend since coming to live with him, had no desire for friends.

When the taxi stopped, they crossed 42nd Street, stepped over spilled fruit and went inside a penny arcade that was noisy with the sound of electric pinball machines. They passed a row of pokino machines, a line of skee-ball machines, walked to a counter at which a ruby-haired woman wearing a white captain’s hat with a shiny black brim was redeeming coupons won playing skee-ball. She was upset, kept pointing up at a cream and red alarm clock, her skin bright fuchsia.

“I want the alarm clock.”

The attendant behind the counter was breaking down rolls of quarters. He did not look up.

“You don’t have enough coupons for the clock.”

“This is your shelf, miss.”

The highest shelf that displayed alarm clocks also held piggy banks, various stuffed animals – stuffed sheep with curly coats of black fur, a row of large silky black and white stuffed panda bears. The attendant took three $20 bills from Andy and handed back a cardboard bucket filled with quarters. Andy went over to the photo booth. Spinning the hard, round, plastic seat counter clockwise to raise it, he instructed Claude.

Since her hair was dark with streaks of gray threading through the brown mixed with strands of hunter green, he chose dark on light and pulled back the azure curtain, revealed the white wall.

She did, straightened her back.

“Look at the small glass window. Hold a pose when the green light goes on. Change it after it turns to red.”

Quarters clanged as they dropped into the machine. A little green light lit, flashed. He spoke in a flat voice.

“Turn to the right.”

He was not sure if she understood English. When she did everything he asked, he gathered that she did and, as his mother had told him, had followed an artist’s orders before. After the light had flashed four times, he stuck his head inside.

He was surprised that a heavy sexual atmosphere was now surrounding her.

At the sound of more coins, she opened her eyes wide and the light flashed red, each flash an ember of fire. She changed positions before each flash, sniffed, tossed her head like a ram. Not only had she followed directions, she had obviously done quick poses too.

When the light stopped flashing, he reached his long white hand inside and pulled the curtain behind her head to give an azure background.

Quarters dropped into the machine

Claude mumbled a prayer of petition, stepped out of the booth. She drifted toward the counter, looking up at the stuffed animals, while Andy leaned against the photo machine. He followed her with his eyes, chewed his thumbnail as she looked longingly at the stuffed animals. In ten minutes, black and white photos, four to a strip, began to drop out of the machine one after the other. Because they were still wet, he gripped their edges, lined them up along the glass top of a horse racing machine to dry. Images appeared.

Claude came to look at the strips. Each contained four images of a face that did not always seem like the face of the same person. Once dried, he dropped the strips one by one into a paper bag.

He handed the bag to her and walked away. She pulled out the strips, looked at her many faces. None of these faces belonged to a nun. He returned and put a black stuffed sheep into her arms. She wrapped her arms around the sheep’s belly and followed him into the street. While he hailed a checker cab, she rubbed the sheep’s fur.

He sat on the jump seat, stared at her face. She could pass for Jeanne Moreau’s older sister.

“If you pay me in cash it would be better. I worked one hour.”

“Let’s make it a half day – four hours. I pay one-twenty-five an hour.”

He handed her five dollars. She looked distastefully at his jacket, his dark glasses; his tight black trousers were like a Nazi SS. He had once seemed such an effete boy, but now he was dressed like a Nazi.

The taxi stopped, and she got out at the statue of Atlas holding up the world. The taxi drove on. Before returning to the house to change his clothes, he had the taxi driver stop twice – once for pastries and once to pick up the Czech newspaper for his mother. 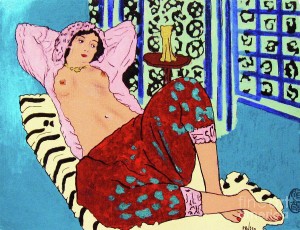 « Excerpt from Part II — “String of Pearls” — THE WOMAN WHO ….. » Remembering Cyla and Simon Wiesenthal on Valentine’s Day