Feb 12, 2015 By Alison Leslie Gold in Book, The Woman Who Brought Matisse Back From the Dead No Comments 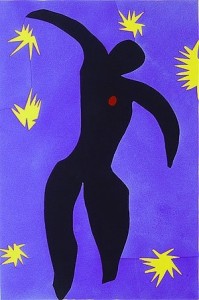 When Claude arrived with her American, Matisse was cutting paper with a long scissors, he was wearing an old gray sweater on top of his old blue and white striped pajamas, had bare feet. The shape of a leg in an arabesque emerged from the heavy paper that had been painted jet black. He was in the wheelchair, his lap covered with a wooly throw that was sprinkled with snippets of black paper. Cuts of black painted paper lay scattered on the floor around the chair.

He shook hands and looked closely at Claude’s man – Roy Foot. What a strange name, a man named after a body part, a man with full, wine-red lips, lime-green eyes carrying paintings strung together with brown rope. Something about him was like a Great Dane. His hair was chrome yellow, had been cropped close to a flat skull.

Roy’s eyes scanned the walls. Pinned on the one that faced the bed were works in progress. Among them two drawings of his future wife wearing a Russian blouse.   In the drawing she was ravishing. Claude looked up at it too. She had no idea she looked like that. She had never thought of her eyes as distrustful before. Gazing at herself, seeing herself through Roy’s eyes, she understood why men wanted to take her to their beds. But did they not see how bad her teeth had become? Roy took in the room, the plants, the knick-knacks. He walked over to the wooden cage belonging to the turtledoves and saw the great drips of yellow-green slime on their wooden perches.

Lydia explained that the household would be leaving Paris shortly to travel south because Matisse must work on designs for the famous chapel that contained St. Veronica’s kerchief with Christ’s face imprinted on it. Lydia asked Claude, “Would you like a glass of eau de Vichy?”

Large incomplete drawings for the chapel were pinned on the opposite wall. Matisse had been able to work life scale because the two rooms in Paris corresponded to the interior size of the chapel in Vence. He commented, “I’m not yet sure of what I will design for the window.”

A nurse crossed the room carrying a metallic tray on which various medicines were laid out. Matisse swallowed one after the other. He uttered, “Merci, Denise.”