Feb 11, 2015 By Alison Leslie Gold in Book, The Woman Who Brought Matisse Back From the Dead No Comments

Following, a short excerpt from Part I – “Pearls Melt in Vinegar” — THE WOMAN WHO BROUGHT MATISSE BACK FROM THE DEAD: 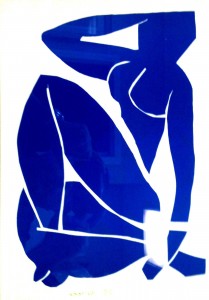 He finished drinking café au lait while Sister Paule poured additional doses of glassy-gold fluid into a metal spoon. She noticed the bread thick with butter left uneaten on a plate decorated with gold geese. She looked to see if her hands were clean, decided they were. He sat surrounded by pillows. The housekeeper was dusting. He said, “I can’t imagine that rat poison tastes any more unpleasant.”

He swung his feet onto the floor. When he tried to stand up, she reached out to assist him.

“Are you suffering, Monsieur?”

“Cramps. But so what, the pain will ease once I shuffle around the room a few times. If this is the price of living on borrowed time, I’m happy to pay in full.”

And this he did while the housekeeper turned down his white-on-white bedcovers for airing. His sheets had daisies embroidered with sand-colored thread. Sister Paule washed him and serviced his intimate needs. He appreciated quickness in these matters. She laced the stiff corset he was forced to wear, helped him dress and suggested he add something under his shirt to keep the chill from his kidneys. He picked an undershirt, one that was apple green. The pressed shirt he had chosen to wear that day was bright pink. She who had spent most of her life in black and white and gray was so was surprised to see colors like these. His trousers were burnt brown wool and it pained him to bend to ease them on. She held up the beige jacket that had been hanging on the back of a chair so that he could slip his arms into its sleeves. Where did one find clothing in such colors? The fabrics were soft to the touch, the colors were like she imagined God might have used in the Tabernacle in the Wilderness in the Book of Exodus.

“Your shoes and socks! I will help you …”

He shrugged and shuffled away on bare feet. Through the course of the morning she moved freely through the apartment bringing medicines at the allotted times, checking his pulse, his temperature, adding numbers to his chart, washing and rewashing her hands in between. He drank café au lait with a small blond woman who smoked one cigarette while lighting another from the end of the first. Sister Paule wondered if this was his daughter until the blond woman was introduced as Madam Lydia.

A charcoal-gray cat brushed against his calves, back and forth many times. He did not mind. He smoked a forbidden cigar during the brief time he was able to stand up among bright green cactuses and blood-orange jungle-like plants in pots arranged on the open balcony, bracing himself with a hand on the railing. Nothing of the city could be seen because the rooftops were shrouded in fog. Sister Paule came up behind him, looked out too. His eau de cologne was appealing. He quietly laughed, “We live above the fogs.”

With great difficulty he walked to the aviary, told her to follow, picked up and held a white turtledove on two fingers to show her and brought the subdued bird to his lips. If it had been anyone else she would have shaken a finger and reminded him that birds were carriers of vermin and germs, but since he was not long for the world, why reprimand? And, dirty as her hands often got, who was she to shake her finger?

After breakfast he inched his way through the apartment half-bending despite the pain it caused, retrieving things that had been discarded in the various trash bins. It seemed that he enjoyed collecting all manners of discards like she did. Of course there was no one to stop him from hoarding whatever he liked. Madam Lydia prepared the workroom. At 9:30 he sat on the side of the cushion-filled Empire bed in his studio. His bare feet were placed side-by-side flat on the floor. He smoked a second cigar. The screams and whistles of his birds in their cages were ear-splitting. Sensing that he was suffering, Sister Paule administered a dose of pain medication.

A visitor arrived at 9:45. As Sister Paule greedily ate bread, butter and salty cheese, she got a glimpse of a dark-haired, foreign looking girl. The cook told her, “She is his model. These days he uses film extras.”

Sister Paule saw the girl remove her clothes and saw Matisse begin a drawing using charcoal. His face and the girl’s entirely naked body were very close. The girl’s hair-covered private part was directly in his line of vision so that he could easily have looked inside if the girl widened the space between her thighs. If she got any closer, Sister Paule could easily have looked as well. In all her life, she had never seen a naked woman in a state of shame-free repose.

Later, when the day had cooled, Sister Paule brought a blanket for his lap, also his pills. He was sitting on a chair, his easel facing the window. The gray Angora cat had curled up against a bolt of golden fabric, fast asleep; Matisse’s coloring had gone from pinkish to biscuit-colored. The model was gone and the assistant was standing on a ladder pinning a drawing to the wall. Matisse was complaining that he needed canvas and pigments, but the assistant reminded him, “There’s a war going on, nothing can be found anymore.”

Sister Paule watched him wrap the blanket she had brought around his shoulders, heard him say, “It’s prostate cancer Rouault has. Pin that a little higher, Madam Lydia.”