Feb 1, 2015 By Alison Leslie Gold in Book, Fiet's Vase and Other Stories of Survival No Comments

During the time when I was researching stories that had affected me in some heightened way during my 20 years of Holocaust and World War II writing  for inclusion in Fiet’s Vase and Other Stories of Survival, Europe 1939-1945, I attended an exhibition of mostly sepia photographs curated in Warsaw titled “And I still See Their Faces” (“I Ciagle Widze Ich Twarze“). It was a rare gathering of rescued photographs related to the obliterated world of Polish-Jews. One tiny photo, the size and shape of a guitar pick, stopped me in my tracks. I then spent 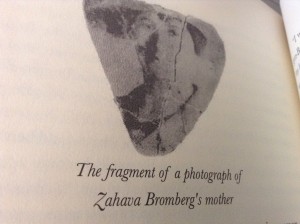 months hoping against hope that I could locate that owner of this photograph. And, providing me with one of those indelible moments a researching-writer can occasionally experience, it happened. Through the Foundation in Warsaw (I can still hardly believe it) I was able to locate the photo’s owner and learned that she was still living. Through more twists and turns we got into contact and she agreed to an interview. Here’s a bit of her story taken from my recently reissued book Fiet’s Vase:

(Zahava Bromberg’s) ... voice was soft,  lightly accented, filled with emotion. She continued describing her wartime experience: ‘I was taken to Auschwitz with my older sister in October of 1944. Everyone was ordered to strip naked and discard his or her possessions. It was absolutely forbidden to keep anything personal.’ Against regulations, she had taken a photo of her mother on the journey with her. ‘I couldn’t bear to part with it. They would have put a bullet through my head if they found it. I tore off the image of my mother’s face and put it under my foot, where it stuck, undetected. We were told to run. We had to pass the selection with Mengele, left or right. That would change one’s destiny.’

Where did the courage to risk her life to preserve the memory of her mother come from? I asked her. ‘From instinct,’ she reponds quickly, then continues telling her story. ‘Next we were ordered to the showers to be washed. So that the photograph wouldn’t get wet in the shower, I managed to cover it and put it in my mouth. I kept it there, hidden. It remained relatively undamaged.’ Of course they would have killed her if they’d discovered the preserved memory – one small photo of her mother’s face torn out of a larger snapshot – hidden on her person.

‘I was very weak after the Death March from Auschwitz to Bergen-Belsen in January 1945. At the gates of Bergen-Belsen, I threw out my blanket. It felt so heavy I couldn’t carry it anymore. There we didn’t work. We all slept on the floor in lines. To our luck, we were in the line close to the window – that was the best. The worse thing was to get rid of the lice. They were eating us away. Next to me were sitting a lot of Hungarian women. No matter what we talked about, it always ended in talk about food. There I had a dream that my father told me,”Hang on. It’s not going to last long.” One day someone came and said that there are no guards and the gates are open. When I went out, I saw people digging and we found sweet potatoes. We saw that the British were taking the Germans and capturing them. I took a stone to throw at a German soldier but I couldn’t because the stone was too heavy for me to hold.

‘The British soldiers who liberated Bergen-Belsen gave us cans of meat. Being so young, I didn’t know that after long starvation I shouldn’t eat the can all at once, I ate it all and became sick and vomited and couldn’t eat anything. I was hospitalized, I weighed twenty-six kilos only. Suddenly we had mattresses and showers to get rid of all the lice…

Was the threat of death worth the preservation of this photo of your mother? I asked. Zahava answers unequivocally, ‘I simply couldn’t bear to be totally cut off from my family. I needed some small tie to them. I kept the photo of my mother’s face either stuck to my foot, in my shoe, or in my mouth, for the entire time.’ It was with her still when the camp was liberated at last – and is to this day.

The writing life isn’t always meant for the faint-of-heart. Remembering Zahava, re-experiencing the various interviews with Auschwitz survivors for my books, seeing the photographs of those attending the 70th anniversary events in Poland, realizing that the curtain on this saga has almost fallen, I find that this subject matter gets more, not less, dispiriting with the passing of time, though that seems impossible.

« 70 years since the liberation of Auschwitz » On James Joyce’s birthday, remembering a loyal father