Michelle’s walk against the wind

Jun 6, 2018 By Alison Leslie Gold in Guest No Comments

I became something of a (lazy) cheering squad during my recent transatlantic crossing on the Queen Mary II, wanting to cheer on my friend, Michelle, who lives year-round on the beautiful Isle of Wight. Because she would miss the annual charity walk for the Earl Mountbatten Hospice on Isle of Wight, she planned an ambitious duplicate walk on the Queen Mary II instead. Following, her short essay on her walk.  Brava Michelle !!! I was there drinking coffee, reading in Cabin 6066, watching you through glass. I salute you!! 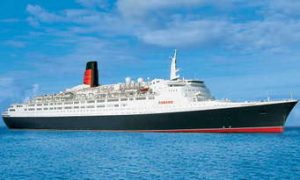 Walking the Wight on the Queen Mary II

I didn’t know the projected date of the 2018 Walk the Wight when I booked a balcony cabin on the Queen Mary 2, last November. So when the date was announced, I realised that I would be mid-Atlantic ocean, en route to New York, on the 13th May 2018.

Why this voyage? Well, after graduating from Nottingham University, I went to the USA in 1964 to study Oceanography. In those days it was cheaper to go by boat than to fly! I travelled on the Cunard RMS Mauretania and returned to the UK the following year on the RMS ‘Queen Mary’. So, this year, a voyage to New York, on Queen Mary’s replacement, Queen Mary 2, was intended as a ‘bucket list’ celebration.

As a recently ‘hipped’ grandma, I’ve tried to complete the Flat Walk, with or without doggie, several times over the past few years, Missing out in 2018 was not on my original list of 2018 resolutions.

Why not do the WtW walk distance on board, I reasoned with myself? Why not indeed?

I examined the deck plan of this huge ship and calculated that 20 circuits would be approximately the same distance as Sandown to Shide – 8 miles.

I had hoped that Cunard would offer some support – perhaps in the ship’s daily newspaper, so I prepared an appropriately modified poster (below).

As it turned out, Cunard have a strict policy of supporting only their own contracts with selected charities, so no ship’s newspaper support for me then!

Nevertheless I decided to press on and do my own thing in concert with the thousands of Mounbatten’s Walk the Wighters.

BUT, I hadn’t banked on the North Atlantic weather! Force 7 gales and the temperature dropping as low as 5 degrees!

As I prepared to go out on the morning of the 13th, I realised that, foolishly, I had not packed any warm clothes!! So, as the deck rocked and rolled under my feet, I sallied forth in a couple of layers covered by my 2018 WtW T-shirt … 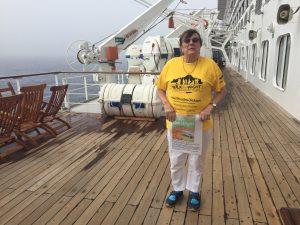 After 3 circuits of the deck I was freezing. Stopped for a hot chocolate and resumed in the afternoon after warming up a little to do another 3 laps before re-freezing.

The following morning I completed a further 3 laps and realized I needed warmer clothing – in the form of a Cunard waterproof and windproof jacket.

Suitably fired up I did a further 6 laps that afternoon and the remaining 6 laps the following morning. That made a total of 21 laps of the main deck or just over 8 miles. 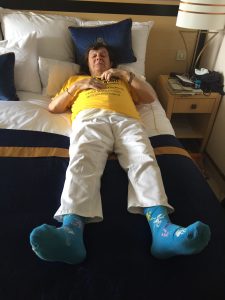 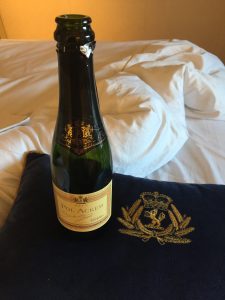 I reflected that during my walking distance of 8 miles, the Queen Mary had covered 60 nautical miles at an average speed of 20 knots. So I guess my WtW actually amounted to the equivalent of 77 miles …!!

So ended my Walk the Wight – PLUS, adventure. Happy to have contributed again!