It began at Ocean Terminal/Berth 46/47/Dock gate 4/Southampton, UK. Once the gangway was withdrawn, it became a universe, and – carelessly – a metaphor for …. well …. the circle of one’s entire life in seven nights and days. Stateroom 6066 rose and fell into the Celtic Sea. 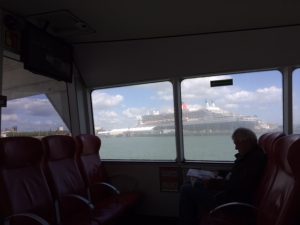 “Waves, large and florid as the tail of a peacock, waves with snow white crests heaved under the impulse of the tramontane wind, and came merrily, madly rushing towards the ship, in the bright lustre of a perfectly clear sky.”[***]

Aroused by force 7 winds, we traversed the Porcupine Abyssal Plain into International Waters. The ship sailed without cunning at 14.5 knots. The sea became rough. 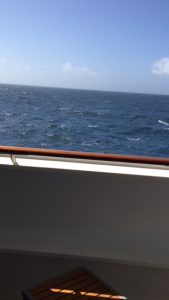 “Like all Americans, he [she] was very liberal with his money when travelling. And like all of them, he believed in the full sincerity and good-will of those who brought his food and drinks, served him from morn till night, anticipated his smallest desire, watched over his cleanliness and rest, carried his things … So it was everywhere, so it was during the voyage, so it ought to be…”

Into the West European Bain, decks 7, 11 and 14 forbidden due to roughening seas.

“At five o’clock, tea in the … smart salon where it was so warm, with the deep carpets and blazing fires. After which the thought of dinner and again the powerful commanding voice of the gong heard over all the floors, and again strings of bare-shouldered ladies rustling with their silks on the staircases and reflecting themselves in the mirrors, again the wide-flung, hospitable, palatial dining room, the red jackets of musicians on the platform, the black flock of waiters around the maitre d’hdtel, who with extraordinary skill was pouring out a thick, roseate soup into soup-plates. The dinners, as usual, were the crowning event of the day. Everyone dressed as if for a wedding, and so abundant were the dishes, the wines, the table-waters, sweetmeats, and fruit, that at about eleven o’clock in the evening the chamber-maids would take to every room rubber hot-water bottles, to warm the stomachs of those who had dined.” 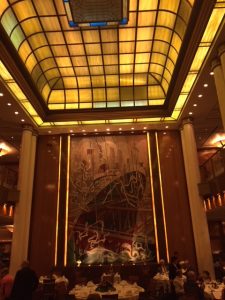 “At last, in the twilight … the wind grew softer, warmer, more sweet-smelling. Over the tamed waves, undulating like black oil, there came flowing golden boa-constrictors of light . . . . The electric light of the cabin shone brighter, and a desire to eat, drink, smoke, move once more made itself felt. . . . “

“Yet the ship travelled well, even without much rolling. The passengers on board were many, and all people of some importance. The boat, the famous Atlantis resembled a most expensive European hotel with all modern equipments: a night refreshment bar, Turkish baths, a newspaper printed on board; so that the days aboard the liner passed in the most select manner. The passengers rose early, to the sound of bugles sounding shrilly through the corridors in that grey twilit hour, when day was breaking slowly and sullenly over the grey-green, watery desert, which rolled heavily in the fog. 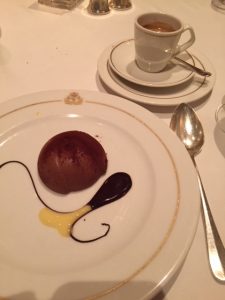 Clad in their flannel pyjamas, the gentlemen took coffee, chocolate, or cocoa, then seated themselves in marble baths, did exercises, thereby whetting their appetite and their sense of well-being, made their toilet for the day, and proceeded to breakfast. Till eleven o’clock they were supposed to stroll cheerfully on deck, breathing the cold freshness of the ocean; or they played table-tennis or other games, that they might have an appetite for their eleven o’clock refreshment of sandwiches and bouillon; after which they read their newspaper with pleasure, and calmly awaited luncheon which was a still more varied and nourishing meal than breakfast. The two hours which followed luncheon were devoted to rest. All the decks were crowded with lounge chairs on which lay passengers wrapped in plaids, looking at the mist-heavy sky … and dozing sweetly. Till five o’clock, when, refreshed and lively, they were treated to strong, fragrant tea and sweet cakes. At seven bugle-calls announced a dinner of nine courses. And now the Gentleman from San Francisco, rubbing his hands in a rising flush of vital forces, hastened to his state cabin to dress.” 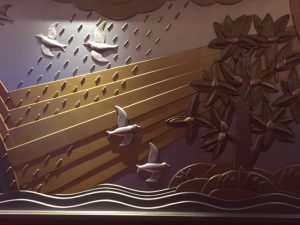 “But huger still was the liner, many storeyed, many funnelled, created by the presumption of the New Man with the old heart.”

Suspended under the mist, the arched spine of Verrazano-Narrows Bridge, at 5:15 a.m, just as a buttered muffin of sun brought daylight and soft rain began to fall. After a while, wrapped in soggy mist, emerged a dot of golden Maple Syrup that was Liberty’s torch 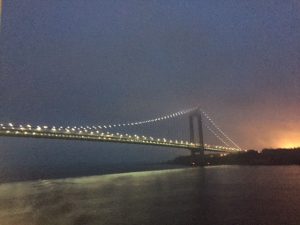 It ended (6:30 a.m.) at Cunard Terminal/Pier 12/Red Hook, Brooklyn/Buttermilk Channel across from Governors Island where handfuls of rain were tossed. And flew. Spared none of us.

[***All quotes are excerpts from “The Gentleman from San Francisco”

This story is one of the great indictments of capitalism/capitalists. And there, for seven nights

being serviced by 1500 mostly brown-skinned staff,

sailed I, irrespective of small sharp teeth gnawing at the inseam of my conscience.]

« Finally published – “When We Were Almost Young” » The penny never dropped