Padric continues: Warning: This material is not for prudes

Jan 24, 2015 By Alison Leslie Gold in The Potato Eater No Comments

“Sex was always instant and quick – you were ever-ready. I knew that the best way to a man’s heart in prison was through his prick or asshole, and learned quickly to have at least five husbands. It was smart to have a man in the kitchen because the food was so terrible – connections for sandwiches. A man in the laundry so I could look pretty. A man in the library so I could keep my culture and intellect high. A man in the hospital for little goodies like cold cream. Vaseline. Shampoo. A man working in one of the factories because he earned money – to have a Daddy with money.

“I became a seminal dump. My only reality was the second of ejaculation. I’d choose the freakiest of mates – Neanderthals – humpy-punky but masculine. I was sometimes known as Millicent Duchess of Southerland, sometimes as Tarzanna because I could swing up through the catwalks from tier to tier. If I had a boyfriend, we’d make arrangements between count time when the guards came by, I’d swing up to his tier, turn the trick, and swing back down in a matter of minutes.

“I fell madly in love with a big Irish donkey who worked in the kitchen and was almost directly above me on the second tier. We began our romance. He’d write me love notes. He’d get a big hard-on and bang it on the locker to let me know, like the cave man beating his chest. We’d send each other our jockey shorts, and occasionally we’d exchange tiny bottles of seminal fluid. I’d sing to him because we almost never got together.” [from taped interviews for The Potato Eater] 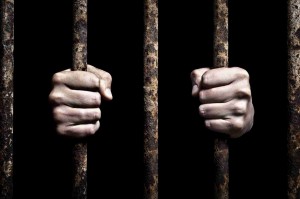