The memory of our long day together in 2009 in Athens remains lodged in my viscera. Though I’m not one for remembering dates, or years, or who wore what when, as you are/were, I am certain of the date because – after thirty-nine consecutive years of friendship – I never saw you alive after it. Nor did we ever have another afternoon tea together as only you could prepare it – milky, sweet – and I never saw your green eyes change color again. Since then, I’ve been making and bringing the tea, and it doesn’t compare in flavor to yours. As you well remember – do you? – less than ten hours after I left to catch a boat to Hydra, between night and dawn, your heart stopped. When next I kissed you, you were stretched out in an open coffin that had been transported from Athens by caique and placed below your house beside the sea. Your arms were crossed over your big heart.  Soon you were hoisted to the nearby church, then carried up those stone steps by young Greeks to the freshly dug grave on the hilltop off the Vlihus road overlooking the sea.

Since then, I’ve relished my many visits with you there, me sitting or lying on the flat grave stone beside yours, drinking tea, coffee, wine for you, breaking fresh bread, a breeze or lazy bees passing between us …. Because you’d given your permission to me to write about you/our friendship before you died, I’ve recounted that last day in my recent book published beautifully by Notting Hill Editions, UK, in October, to be published by New York Review of Books Press, USA, this coming March.  [Excerpt follows ***] In my telling, I neglected to mention, among your other bequests on that fateful day, the cellophane package that appeared from which you removed a long-sleeved pink child’s shirt onto which a white tree-of-hearts with a bird on top had been sewn. You explained: I found this at the flea market. Locking eyes with mine, you instructed: This is for Thor and Talia when they have a baby. Give it to them! 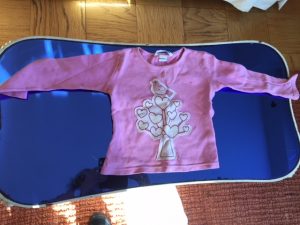 I promised I would, of course, meaning well, then took it to Hydra with me, then Amsterdam, then New York, where I put it aside as no baby seemed to be on the horizon. One by one, others died, then death after death. After various seasons, my hair became entirely white, later I discovered that my feet were longer and wider than they once had been. I’m not kidding, Lily. Now I understood why my shoes had been bothering me in recent years – I was buying the wrong size, wrong width. To keep my promise, I hung onto the gift though no baby materialized to which I could present it. It seemed as if this would always be so. New books were written, published, unpublished, I sold my Hydra house, de-cluttered my NY apartment in several stages filling bags and bags with debris from my past, but not the child’s shirt from the Athens flea market against decreasing odds.

There were two cataract surgeries, I went to Iceland with my sisters. While we were gazing up at the sky  above the Arctic Circle seeing Northern Lights for the very first time, I later learned that Mother Nature had been busy far away in Los Angeles. Did we dare to  hope? Yes and no. Yes: Hope against hope. No. Not wanting to endure one more heartbreak. But, we all held our breath. Months passed slowly … On November 7th, weighing in at 7 pounds 14 ounces, an alabaster creature appeared on stage. He received a wondrous name – Micah – after a kindly prophet from the Old Testament. When we knew he was healthy, a collective sigh was audible from coast to coast and heavy weights fell from shoulders, yours too, I’m sure. In December I packed a suitcase full of gifts. 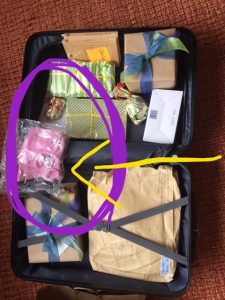 Your package was included and on the 14th of December I was able to put my arms around warm little Micah for both of us. I handed Micah’s father (your little American peanut of long ago) the shirt, From Lily, I told him. Promise kept! More in April when I climb the Hydra hill to sit beside you. Will bring photos, ask for your advise on various issues. I must admit, I’m scratching my head as am amazed you knew there would be a baby when no one else did. But, then again, you’ve always been smarter than the rest of us. Until Spring. 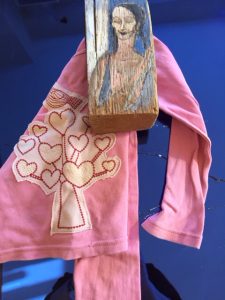 [*** condensed from Part I, from letters to our French friend Ruffe – Found and Lost: Mittens, Miep, Shovelfuls of Dirt – available at New York Review of Books Press website] 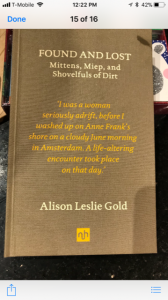 Lily hadn’t been to Hydra for two years. She’d been holed up at the family’s Athens apartment. She was out of the hospital ten days when I arrived on September 29th. ‘I was born in a warm place,’ she told me: ‘Tehran. My children and husband want me to go to England, for better medical services, but I don’t like the cold. I don’t like the Anglo Saxon.’

Lily’s emphysema had progressed to the point where now she was tethered to a large oxygen tank. The tumour in her breast that she had refused to have treated had metastasized and was now inoperable. (Once, she took my hand and put it on what then felt like an asparagus tip.) ‘Maybe I’m eighty-five,’ she told me, ‘or ninety. I’ve lost count.’ She wasn’t kidding: she had often falsified her age upward as well as downward through her life when it suited her.

Rather than rush from Athens airport to Hydra, and because she had said ‘Hurry’ when I had spoken with her on the phone, I’d made a hotel reservation in Athens. In the morning, I stole a bag full of breakfast foods from the hotel dining room to bring with me. Like I’d done in the past, I spent the entire day with Lily. Arrived at 9:30, left at 7:30 in the evening.

In the course of the day we ate spinach pies, halvah, slices of marble cake, hard boiled eggs, toast, bacon, croissants, rolls, jam, butter, cheese, salami. We ate like horses. I’d also picked up a loaf of bread and a string of garlic from the market. During our day together she wrote letters of farewell to her granddaughters, taped a message of farewell for my son, referring to him as her ‘third child’, found several £20 notes in a copy book and gave one to me for my son.

She summoned me to the bathroom. I came. She was naked, standing, stretching without the help of the oxygen tank.

I will send this now and continue when I’m less jittery. …

As in the past, we took naps in the afternoon; Lily slept in her chair beside the oxygen tank. The house was knee-deep in clutter: treasures to Lily, garbage to others. Because there had been an infestation of giant cockroaches, I had refused to sleep over or even nap in recent years, but not that day, so for an hour or two all was silent.

Lily’s green marbled eyes burnt with delight while she peeled a large, bone-yellow garlic clove, then folded it into a fat slice of bread. This was something she had done all her life: either rub garlic on bread, or fold it inside to swallow it whole.

As usual, when I left she stood on the terrace and blew kisses to me while I waved and blew kisses to her, walking slowly backward toward the corner. She was wearing an overly large metal-grey second-hand man’s Armani jacket that I had arrived wearing and had given to her. As we had for all thirty-nine years of our friendship, I turned the corner, paused, then unturned the corner, went back, to wave again. Of course she had not moved, stood waving, looking like a young woman. She had always outwaved me; I was always the one to leave first.

The next morning, September 30th, I took the first hydrofoil to Hydra. At 11 a.m. Lily’s husband Alan telephoned to say that a few hours after I’d left, Lily had felt an intense pain in her stomach. She had toughed it out through the night but at dawn he’d called an ambulance. She died in the ambulance: ‘With no fear,’ he told me.

My first thought was: Death by garlic. It occurred to me that, having been in the hospital for two weeks hardly eating because she did not want the indignity of a bedpan, she knew perfectly well that gorging all day, as we had, would be lethal to her system. Since she would be forever attached to an oxygen tank, she might have swallowed a garlic clove as big as the Ritz so as to die at a time of her own choosing. This would have been in her Russian character.

The coffin was brought by boat to the harbor of Kamini, our little village on Hydra, below the house we knew so well that she inhabited for more than sixty years; a house which, I was once told, she had bought for a single gold sovereign. She had retreated to the island because, she said, the war had made the world unfit to inhabit (unless it was that the war had made her unfit to inhabit the world). The Orthodox service took place at the church ten steps from her house. She was buried in the graveyard along the road that stretches to Vlichos, the final village on the west side of the island. …

« With Micah on Christmas » A review, an audio podcast, sick as a dog