Aug 1, 2017 By Alison Leslie Gold in The Devil's Mistress No Comments 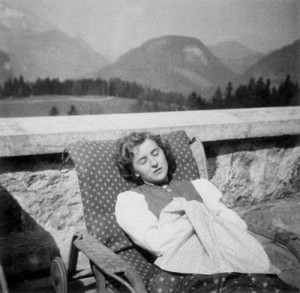 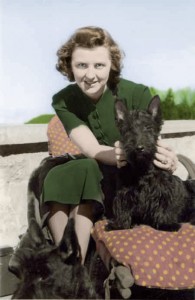 A day of repose.

For reasons of my weight, I’ve taken an intense interest in gymnastics — especially work on the uneven parallel bars. Vati would be pleased if I compete nationally like my sister does. I have begun training with this secretly in mind. Perhaps I can win Vati’s admiration?

(I prefer it with thumbs around the bar.)

reversed, when the turn is in the opposite direction.

Word leaked out to Oische about my “evenings” with “him.” She does not approve. But then again, I do not approve of her “attachment” to her doctor/boss/amour who—though famous in München—is “older” and a driver, a Jew?

Oische bragged haughtily, You are naive, all Müchen knows Herr Wolf is in love with his half-sister’s daughter. Her eyes slid from side to side when she talked.

She’s the one who is naive. All of München doesn’t include me, who has never—except by him—been kissed by a man.

Tell more, I begged, shocked, yes, but curious too.

She told me that his niece is twenty-two years old. It’s known that the niece actually sleeps in a room that adjoins his bedroom. I felt bubbles in my stomach. I asked, Is there more?

They are seen everywhere together—the Heck, the Carlton for tea, the Prinzregenten café near Brown House, the Stephanie after lunch, and the Osteria after opera.

What does this “niece” look like? Perhaps I have seen her through the window at the Heck?

A surprise! Herr B. invited me to Fasching. I discovered that Herr B. is the party secretary.

We sat at a small table in the most lively beer tent drinking and eating while I nibbled on a giant white radish cut into spirals, and a plate of bright red Mettwurst. Like Vati does, I dipped the radish into salt.

Shaven-headed waiters are so strong they carry large trays with at least ten miniature cathedrals.

Across the tent I saw Herr Wolf arrive with a girl older than me.

Who is that monkey-faced girl? I asked, suddenly moist under my arms.

Herr H., who I just learned is head of his special police, skulked by and tipped his hat to us. And who is this fresh-faced Fräulein? he barked. (Obviously he doesn’t remember me.)

My escort burst out laughing at his own joke. Rude, like a chicken farmer laughs. I’m sure I went red. Through the crowd I could see nothing more of Wolf and his niece.

Again his “visits” to the shop have ceased. His tongue no longer paints across my lips and cheeks. So much for my mad interlude! So much for dreams of playing the accordion, of keeping company with a high personage in politics rather than a poor, blunt Catholic boy.

Today to keep busy I waited for Mitzi after work. Two “working boys” asked to walk us home. The one who chose me had fuzz on his upper lip, a limp excuse for a mustache.

Just when I thought that surely he had forgotten me, the telephone rang at the studio. My boss handed me the telephone.

I’ll send someone to fetch you gnädiges Fräulein.

Before I could climb into the car, he clasped me tightly by the elbow and pressed his palm against my rump.

Glad that he had not forgotten me, I pressed back while he studied my new hairstyle with a critical eye.

He barked, pressing more. How would I look if I changed the way I comb my hair?

Perhaps no one would recognize you, I ventured. The thought made me want to laugh.

At Herr H.’s I had seen him comb his dark brown hair by bending forward and combing it straight over his eyes. I’d seen how carefully he parted it, then combed back the left side, then, how he had jerked his head so that a lock fell across his forehead. I heard that his mustache was clipped always the same too.

I thought: I’ll punish the girl—the crouching ape—who cut my hair this way. I’d make sure she was sorry.

Beside the car he gazed down at me, his body thrust forward. I heard his breath come in pants. He reached under my coat and dress, and clasped my woolen stockings. His blue orbs narrowed, causing me to roll my pupils back, to also show him my very wet, lolling tongue.

I’ve heard nothing from him once again but now I always know his whereabouts because they are reported in the Völkischer Beobachter, which I buy and scan for news of him. Vati curses if I leave this newspaper in the sitting room, so at work I skim the paper for his activities.

On the streetcar I push this forbidden newspaper under my seat.

With glee Oische pushed a copy of yesterday’s newspaper under my nose. I sat with Vati and Mogerl. Yes, our baby sister is home from convent for good. I read every word and my palms got boiling hot:

…his niece, age 23, shot herself through the heart with his Walter 6.35 revolver near

midnight on September 18 and shortly thereafter died locked in her room.

He had been in Nürnberg at the time delivering a speech to his organization.

After Vati had gone to bed, I stole a few Pfennig from Mutti’s household purse, and ran out into the rain to purchase today’s evening newspaper. I held it up under a streetlamp and read:

The suicide resulted from a violent argument between him and his niece over her desire to leave his apartment and settle in Vienna where she intended to marry a young Viennese.

An unmailed letter to a girlfriend in Vienna was found in the apartment that said she was leaving ….

In the newspaper are photographs of him taken in Berlin. He is surrounded by beautiful screen actresses: Anny Ondra, the wife of boxer Max Schmehling, Jenny Jugo, Renate Müller. Also women of standing and prestige like Frau G., the wife of the propaganda minister, old Winifred Wagner, Frau von Dirksen, all photographed at his side.

In one photo he’s posed with Gretl Slezak, the daughter of world-famous opera singer, Leo Slezak. What can I do? Nothing. With unemployment dwindling and order everywhere restored, he’s more popular than ever. Why would he want to be photographed or even seen with an unknown convent girl?

I worry most about Gretl Slezak and Henrietta because they are so bosomy.

Henrietta’s reputation is spotty while her bosom is big.

He takes “me” nowhere. When I ask whether he’ll ever marry he replies that he’s married to Germany. With me he doesn’t want to talk. My conversation is usually ignored. My breasts are minute no matter how much I pull at them. I’m so short!

He has also allowed me—very occasionally—to ride in his car with him. If his mind is not elsewhere, I part my knees. We sit side by side on the plush leather seat. I sit straight but I shift my torso, part my pig thighs. Desperate for some sign of recognition, I lick at him, pant, peering into his face.

I pull at his arm until he drops his hand into my blouse and presses my narrow nipple. I breathe spasmodically while his hand caresses me. My ears droop, my head rests against the seat. Then—contented—I watch the scenery rushing past. Our Bavaria!

Loudly enough for all to hear, he tells me, I wish you a good night’s rest,

Then I reply in a stage voice, Good night mein Kanzler. Sleep well.

After our farce, I timidly wait for him near in a corridor. If he’s so inclined he takes me to his bedroom. It contains a white metal bed decorated with ribbons, also, a painted chest of drawers, a straight greatest man in Bavaria and all of the country, certainly.

Then he reaches inside my clothes again … promises mad love. His tongue drips copiously.

The half-sister takes every opportunity to humiliate me at Haus Wachenfels. Usually when I arrive she claims that the guestrooms are all occupied. She said about me: The disgraceful blonde who chases the Chancellor. Worse than a common street walker.

I am hurt. My hurt is like her frantic canary.

Again my weight is going up! And no 100-Mark, no envelopes. I’m desperate. I need more money, but my boss refuses an advance on my salary. All day today despite the heat, my boss growled out errands for me to run or else kept me in the back room organizing his dusty stock. He must have drunk too much at lunch, he gave me a sharp nip on my arm for no reason at all.

He was seen at the theatre with Olga Tschechowa and Lil Dagover! Photos in the newspapers of him in Berlin with beautiful actresses.

I can do nothing. Even my lottery tickets are Nieten. All I can do is look pretty, go to work, run errands, smile “lavishly” at the customers, and then come home at the end of the day to listen to the radio tell of boring routes planned for our Autobahnen.

Nightly, I feel a burning in my stomach. Rather than responding to “invitations” by other men—young men, free men, virile men—I wait for “his” call. On weekends I’ve begun to master positions on the parallel bars. In this order:

At night, if the telephone call does not come, I await the news that he has discarded me for someone else. If only I had never met him.

I long for this madness to let go of me.

The Devil’s Mistress, The Diary of Eva Braun,

The Woman who Lived and Died with Hitler 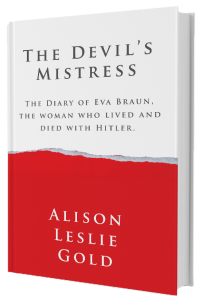 « To be or not to be-reft » Salt, pepper, mustard, vinegar