To be or not to be-reft

reft: past and past participle of reave

reave: carry out raids in order to plunder

rob (a person or place) of something y force

One hundred ten years ago today (26 July 1907) Lucia Joyce, daughter of James and Nora, sister of Giorgio, was born in a paupers ward in Trieste. She died in Northampton, England in a mental hospital on 12 December 1982, having spent much of her life locked up – there or elsewhere. From birth she was sickly, cross-eyed, a victim of her Mother’s critical eye, and sharp voice. Although her father coddled her, believed in her, bought her a fur coat and when she lost it bought her another, her sanity had been reft, her prospects bereft. Following are excerpts from my book on Lucia’s life, a love note to her, her courage and tenacity in spite of all especially the bad hand she was dealt at birth and the ignorance from which her mental weakness was treated. Very late in life, though, a love from youth returns to join her in my novella. Before the final curtain falls, bereavement gets tossed aside along with her lap robe; one promise made to her is kept. 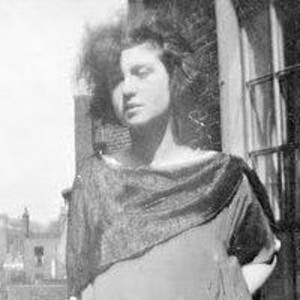 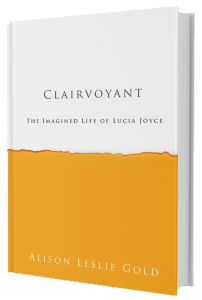 On 28 May 1929 the onion seller finished his work at the produce market at Les Halles, and went walking along the Galerie de Montpensier to look at the small shops, which sold old medals and stamps from around the world. He saw a woman with a small beard and a mustache. He saw that she had mismatched eyes. He wanted to make love to her.

At the arched entrance to the Bal-Bullíer he showed a ticket to the usher. She was a little old woman with a black lace collar and a deathly white face and wrists.

A vision appeared on the stage. A live mermaid. She swayed and undulated to the music, a tall, silver-and-green iridescent mermaid with ribbons threaded through her reddish hair. She wriggled across the stage. As the mermaid shimmered in the stage light an underwater effect was created.

The mermaid’s dance finished, her tender and lovely face glowed pink as the sound of the hands hitting each other and voices cheering burst from the audience. She was not at all diffident. This man was afflicted with a feeling light and pleasurable, weightless as a rib. His heart had melted totally.

As she bowed gracefully he saw that the silvery scaled fishtail curled to the left and that a human leg and foot stood beside it.

“Nous réclamons l’irlandaise!” two voices shouted from the crowd. One voice was Father’s, the other Mr. Beckett’s .

Other voices unknown to me shouted it again, “Nous réclamons l’irlandaise!”

My intuition told me that a stamp had come into the onion seller’s mind, one he had seen in a shop on Galerie de Montpensier.

The onion seller saw the mermaid’s face go pink with pleasure, her smile contagious to both of her bright blue antelope eyes and to her sweet mouth, with which she was trying to maintain reserve.

Then the lights went out.

Another dancer and another music began.

This was some kind of competition between all the dancers. The onion seller would give his life for his mermaid to win.

I was that mermaid but I did not win.

The onion seller followed me out of the theatre. Anxious excitement, perhaps danger, quickened my heavy heart. He backed up and down the curb thirteen times.

Down the street a café had turned on its gramophone. “Pars, sans te retourner, pars.”

Then he glimpsed a long, slender green coat, and a long, milky neck. I was walking with a forlorn droop, wearing a helmet-shaped hat pulled way down over my face. I walked with three other people, a blind man, a beanpole, a worshiped mother, but apart.

I was near the corner. The gas lamp turned my coat to green blotting paper.

What was the use? My glaring deformities, the strabismus eye, scar on my chin, I could go no further. A dancer must be strong. I was not strong any longer, my deformities took enormous strength from me. There were men everywhere, stimulating, vibrant men. A dancer is like a fighter-sex and training do not mix.

No matter who I went with, Mr. Beckett saw me at home every single day.

I had no choice. I gave up dancing.

Then I began to weep and weep. I wept much more than Mother had wept.

from section ‘At Seventy’ –

When my parents come for a visit,” she told Miss Kennedy, “don’t let them see these scurrilous books.”

The writers of yet another scholarly monograph arrived to interview Lucia Joyce. She now called them biografiends, as had her father.

Lucia’s health had been declining. She spent many hours of each day in a wheelchair, often asleep, out of doors if the weather was good so that she could listen to the birds sing to her. She seemed to be waiting for someone to arrive, taking special care of her hair each day and donning an old evening gown even in the chill when she had to cover it with the fur jacket and a lap throw.

It was on a beautiful April day that these three scholars came to Barnaderg Bay to interview her for their paper.

The professors gathered around her wheelchair, holding three kinds of tape recorders, and spoke with her in oily tones as though they were coaxing a rather stupid camel through the eye of a needle, offering biscuits first. “Walker’s Shortbread Rounds, Miss Joyce? Pure butter. Creamy buttery ummm.” They handed her a fistful of biscuits. “Ummm, yummy umm,” the coaxing was almost a hum.

Then Miss Joyce started to hum, her voice sweet but erratic. Three hands pounced upon tape recorders, pressing all buttons to “record.” One professor named Gogarty held out a Marlboro cigarette.

At this instant she turned coy, tilted her head, batted her eyelashes. “Pour moi?” she asked.

All three leaned their faces almost against hers. “Miss Joyce, do you remember anything at all of your father?” one demanded, tape recorder in hand.

They dared not breathe.

“What papers did your father leave in the rue des Vignes flat when he fled to Switzerland when the Germans came?” one asked her intensely.

She thumped one of the men with her forearm. “Are you married?”

“Father opened the big horse’s belly. Mother sewed me up inside. I’ll be getting married too. Don’t rub your mushy fat worm between my thighs again, monsieur. I get the ring.”

She spoke no more. She had forgotten him. The cigarette she had been given burned between her lips. Not inhaled. Not exhaled.

The one named Gogarty resisted an urge to squeeze her big old woman’s breasts to make her speak again.

She shut her eyes and sweetly whistled a melancholy tune, her whistle intermingling with a mockingbird’s trilling sound.

Then she began to snooze.

The three moved off together to the edge of the emerald lawn. Excitement stood out in beads of sweat on all three foreheads. Gogarty rewound his tape, then jammed his long finger against the button. The sound of a mockingbird first, then his voice with the words “Umm, yummy um,” and then a mindless hum followed by a second hum. “Strange, I don’t think of mockingbirds in Ireland,” mused Gogarty.

His associate looked up and removed his eyeglasses.

Not another word was said until the tape had concluded.

“What do you think?” asked the associate, pulling on the end of his nose.

Gogarty made some notes on a small pad and then drew a circle around his notes. “L’Esclammadore! Father’s nickname during the early Italian years. The other, colcannon, no doubt. Druidic Sun God feast. Saman, the Lord of Death, that type of thing, bringing together all evil souls who have been condemned for all eternity to inhabit the bodies of wild animals. Also identified as the Irish Saman vigil, Oiche Shamhna. Get it? In my eisegetical view, a tea party. Nausicaa!”

His eyes bulged out of his face.

The other two neither concurred nor disagreed but remained silent.

Gogarty continued, “… cabbage and potato dish served up on the last night of October. All Saints’ Day, Hallowmass vigil. If you get the sixpence, you’ll find wealth, the thimble gets to stay a spinster, the button getter destined to be a bachelor, the ring getter . . . marriage within the year. Could she possibly have any marriage prospects whatsoever?” His tone was mocking.

The third said, “That tune. Hum it again.”

Gogarty spoke, “Tannhäuser … from Wagner, from the melody sung by Wolfram urging Tannhäiuser to return home to Elisabeth, the heartbroken maiden pining for him, the niece of Hermann, Landgrave of Thuringia. You see Joyce hated Wagner but his wife liked Wagner.”

He turned on the tape recorder and listened to the humming duet again.

If he hadn’t known better he would have sworn that the bird and Lucia were conducting a duet.

He held degrees from three universities. He knew better.

A confetti of swallows swept willy-nilly across the rolling lawn. Their closeness to the ground usually predicted rain. Gogarty noticed that a small man had begun the long walk up the gravel drive from the iron gate. At a distance he looked like someone who had been to the opera. Gogarty couldn’t resist laughing.

He saw that Miss Joyce had risen up from her chair at the sight of him; her fur and lap robe had fallen to the ground, and she stood in a lovely, iridescent silver-and-green evening gown. She seemed to be either laughing or whistling at the sight of him too.