the smell of young tomato vines

I’ve got a patch in a communal garden across the street. In it is a rose bush that came from a small cutting taken off an aromatic climbing rose belonging to my friend Lily (now dead) that flourished for years on her terrace on the Isle of Hydra in Greece. It’s miraculous annual flowering reminds the olfactory me of the many thousands of happy days and nights on that terrace. (photo left) Also thriving, a small cutting brought back from Plavdiv, Bulgaria, last year, gifted by the Kovachiva Family, my generous hosts. It’s a thirty leaf Bulgarian rose bush and, so far, two sublime pink roses bloomed last year, and three this year. (photo right).

Also growing in my little patch: Various fragrant herbs, beets, carrots, tomato plants encircled with wire cornucopia-shaped frames. My friend Liuda and I went down to weed a few days ago. As neither of us are real gardeners, we did our best to 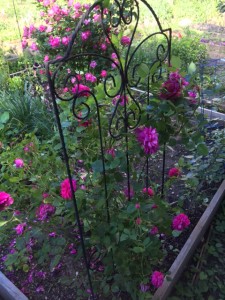 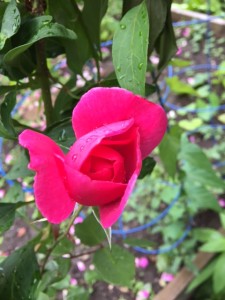 distinguish between plantings in early stages of growth and weeds in who-knows-what stage. We did fairly well except (I fear), I pulled up and threw out fistfuls of young cilantro along with weeds and other detritus.

Because I slept deeply last night, I didn’t know if any of the predicted rain had fallen. This morning I went down to water in case my garden was thirsty. While waving the green hose with my thumb covering the nozzle to control the spray, I was overcome by the aroma of my juvenile tomato vines; an aphrodisiac alternative. From the moment I inhaled what was offered by these growing vines, I became happy.

As the recent rainstorm ends, the silvery late afternoon light is reflected in high-rise windows across from me, I’m happy still. A startling discovery: A cologne is available as a spray, a splash, a body lotion, a roll-on perfume, a massage oil that is called ‘Tomato’ – the brand is Demeter. Further: Plush Hermès manufactures signature candles that smell like arugula, cucumber, watercress, mint, basil, lemon.

WHY is it that the poet tells
So little of the sense of smell?
These are the odors I love well:

The fragrance of a fumy pipe;
The smell of apples, newly ripe;
And printer’s ink on leaden type.

Woods by moonlight in September
Breathe most sweet, and I remember
Many a smoky camp-fire ember.

Camphor, turpentine, and tea,
The balsam of a Christmas tree,
These are whiffs of gramarye. . .
A ship smells best of all to me

As long as I have my nose, I need never be sad again. 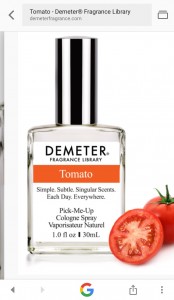 « Banging heads against the wall » In the dark, on the conch