Oct 18, 2014 By Alison Leslie Gold in Elephant in the Living Room No Comments

Who’d have “thunk” it? We targeted this book toward an audience of 10-13 year olds and those who are older who have an interest in its subject matter. We were prepared for curious dogs, as well, since the book is narrated (in part) by Beckett, a beguiling and funny lost dog.  But . . .  in no way were we prepared for such a variety of species; nor do we know who might be able to translate the book into languages that will make it’s substance understandable to these enthusiastic fans. Including this curious and noisy rooster. Any  suggestions? 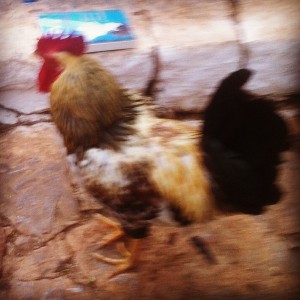 « But including other species (adults with their children) whose curiosity has been aroused » Read to us. Even a few excerpts. Please.