Joan of Arc left her card

It was stuck under my ‘SEE NO EVIL, SPEAK NO EVIL, HEAR NO EVIL’ coir door mat encircled by silvery lining – a business card. I bent to have a look, it was sable-black with a childish drawing of fork and knife including decorative pale-mint highlights. I bent all the way to pick it up. It felt metallic and fibrous to my responsive fingertips, almost lamé though gloss-ish. I carried it into the apartment with my coffee container. Inside, I turned it over, held it between two fingers in the light, saw

Was it the Joan of Arc … or was there another? I wondered which, pouring light coffee (from the kiosk on 24th Street – $1) into my blue and white Delft china cup whose handle had long-ago broken off, and – side-stepping into the kitchen – dropped the empty cardboard cup into the recycling bin. Clasp a handfull of lose ice cubes from the container in the freezer, I added them my coffee, gave the cup a gently shake and took a rewarding sip but not a second, as I was diverted by shuffling/sweeping noises at my door.

I walked down my hallway to have a look. Through the keyhole leaned Mussolini’s lion cub with its orange pelage licking the silvery lining around the ‘SEE NO EVIL, SPEAK NO EVIL, HEAR NO EVIL’ mat off. It tossed orange pelage while fiercely licking with a bubblegum-pink, spiny, sandpaper tongue, a tongue more suited to Mick Jagger. At a distance came the noise of the elevator stopping with the usual sigh. The cub heard it too and stopped licking, the tongue recoiling, while rounded ears rotated a quarter turn … or maybe swiveled.

I heard the elevator door roll open, and soft footfalls on the terrazzo corridor for a second or two. Into my sightline came (gliding) an armor-wearing youth of indeterminate sex with straw-colored hair bluntly cut below his/her ears. He/she stopped short at the sight of the furry animal, paused, and cautiously backed away. This retreat must have captured the cub’s attention, since it u-turned and scampered in pursuit.

In a wink, both were out of my sight line. My heart rose and fell, I had been holding my breath. I heard the sound of something hard meeting something metallic, then heard the elevator door slither closed. And nothing more.

Cold coffee and calling card n hand, I kicked off my shoes, pulled off the constricting brassiere, tossing it onto the green rattan chair I’d found on tenth avenue. Stretching out on the couch, I took welcome drinks of milky coffee while caressing Joan’s card with index and middle finger. Yes indeed, it was coal black lamé with raised ribs (thread-like ribbons) buried in the material. Trump’s disagreeable tweet lifted from Mussolini – ‘It’s better to live one day like a lion than 100 years as a sheep.’ – came to mind, fouled the enticing moment. 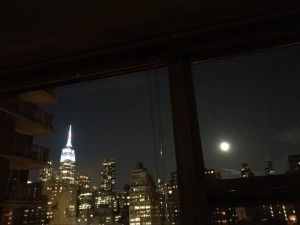 I awakened at 2 a.m, was lying flat on my back. It was deep night. The full Strawberry Moon of June hung in the dark sky at the center of my window overlooking midtown. It was so dark, two water towers weren’t even visible. This was the promised ‘smallest’ full moon of the year, the ‘mini moon’. Seeing it in all its splendor, it didn’t seem small, didn’t seem further away than others, though it was. Saturn was no where in my sight-line; I heard no traffic noise, the pre-dawn sparrows hadn’t yet awakened.

I was rested, warm, valued what was left of my family, my friends, books as yet unread, wouldn’t change my lot for any other. What had Joan wanted – the Joan of Arc or another?  Was an opportunity missed or was I in luck that it had been missed? A cheap black radio, along with  ‘The Romanian‘ by Bruce Benderson, a yellow pad and pen, and a second (back-up) book (‘Red Roofs and Other Stories‘ by Tanizaki Jun’ichiro) lay alongside me, in easy reaching distance, no stretching necessary. What more could I wish for?

Perhaps Joan’d return another time. There was no contact information on the card, so there was nothing I could do about such a ship that had passed without docking. 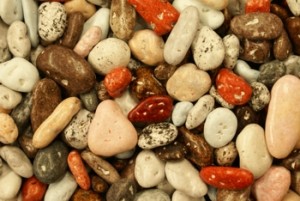 It seemed like the time had come to buy a new door mat now that so much of its silvery lining was licked away. As much as I hated to admit it, the three-no-evil monkeys were rubbed almost entirely away as well after years of footfalls, foot scrapings, winter boots, garden shoes. I’d had my eye on an indoor-outdoor mat made with polished River Rocks. ($37) Here was my excuse to spring. Spring forward, cast the first stone between a rock and a hard place since there’s a time and a sticking stone for everything, and the time had come.