Suspense to the very last second

Oct 3, 2014 By Alison Leslie Gold in Elephant in the Living Room No Comments

As it’s a new month, here on a small island in Greece, locals pay electric, water and phone bills through the local post office.  Up a flight of steps, in back of the “agora” or market, is the small Post Office. Since budget cuts, there is only one woman behind the counter doing all – bills, stamps, pick ups from Poste Restante – Miss Bling, as she is known because of her taste for shiny jewelry. Hoping against hope that my first copies of ELEPHANT IN THE LIVING ROOM had finally arrived, I climbed the steps and joined the disorderly queue. In front of me, a blind guitarist. As sweat gathered and began to roll down my cheeks, the queue slowly moved occasionally pausing for Miss Bling to conduct conversations on the telephone that seemed to go on endlessly. Finally, the blind man had paid his electric bill, received and pocketed his change and turned away, tapping his cane as he went. A radiant smile appeared on Miss Bling’s face as she thrust a small package into my hand.  Yes.  It’s true. The ELEPHANT has landed! 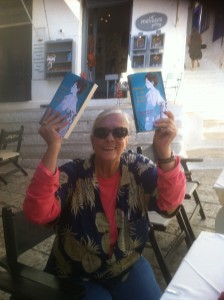 « Still waiting. But tomorrow might be THE day. » ANIMALS NOT PEOPLE STAMPEDE FOR FIRST LOOK AT NEW BOOK