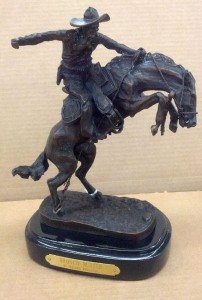 ***It was dusk and I could hear snow shovels scraping the asphalt below as folks dug out their buried cars. These parked cars were pinned in by mounds of dirty milk pushed against them by rasping snowplows shunting new-fallen-snow throughout last night’s blizzard. In the dimming light I searched the bookshelves for a Chinese translation recently received. Its arrival had been a source of satisfaction as none of my books had been translated into that language until now. I pulled here, there, here, was about to turn on a light, when a rock-solid object blunted my head. I clasped the dropped fright, a faux-bronze copy of Frederic Remington’s ‘Bronco Buster’ should have been above my head on its wooden pedestal alongside the melancholy shrine. Below, three bookshelves jammed with editions of books written by me along with translations, another consecrated place, exhibiting thirty years of exoneration.

‘Bronco Buster’ was meant to steward photographs depicting my dead parents. One photo: my serious mother in college days with raven-black hair coiffed in ‘victory roll’ style. Beside it, a second photo: my father, also from Brooklyn college where they’d met. Close by: a wooden duck decoy once part of mother’s vast collection now dispersed. Father had been dead for seven years, mother a bit more than three. The grainy time of day pulled at the remaining light. A cowboy rose up above the saddle on Remington’s rearing horse, reins and horse’s mane in one hand, small lash in the other, an empty stirrup left dangling.

‘Why abort me at this late date?‘ I asked the ghost of my mother, then sulked, ‘How unkind to use your cowboy-movie-loving husband’s only art object to do away with me.’ My mother, the eldest of three bright daughters born to Russian immigrants, a confectioner and a piano teacher, had been host to the spark of light ignited when father’s rank-and-file sperm met her entrepreneurial egg. This flash must have occurred during the autumn of 1944 as wars on two fronts ground on, white flags of surrender not yet unfurled. That unseen aurora of that human conception, mine, in the shelter of a small apartment in Brooklyn where elsewhere in the apartment another child (more than two-years-old) already existed. I was born the following year, the summer between surrenders. This spark of either zinc-green or blue-green or even red-blue-green seemed to me like a fragment from the Northern Lights just glimpsed for the first time two weeks ago in the sky over Iceland. 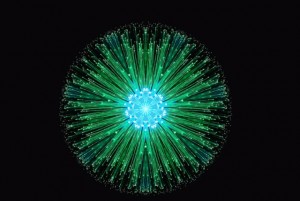 I saw that mother’s photo was no longer where it had been though father’s remained. She had fluttered somewhere unseen. Father’s handsome face, with shining eyes, black hair, was alone now in near darkness on a friday in March while his America fermented in ways that would have made him laugh though the rest of us quaked. Just as he’d smirked at my Marxist aunt who still believed in the transformation of a feudal culture into a factory worker’s idyll, he might have dismissed history’s unraveling turn toward feudalism, though I’m not sure. But perhaps, seeing our distress, he might have added as was his way, ‘Don’t take it all so seriously.’ I felt the moist wound on my scalp with two fingers. Yes, there was blood. To protect recently laundered sheets from indelible bloodstains, I left ‘Bronco Buster’ on the kitchen counter and walked toward the bedroom while pressing a bit of paper towel against the wound. Once the paper stuck, I rolled my Rothco watch cap over my head and, slightly stupefied, slid back under clean vanilla sheets and chartreuse duvet to resume re-re-re-reading ‘Doctor Zhivago’, the Pevear/Volokhonsky translation.

I’d left off at the bottom of page eight when distraction had sent me to look for the unfound Chinese translation. At this point in the novel the boy Yuri was seated beside his Uncle Nikolai in a traveling tarantass. This uncle (who was a defrocked priest and would later become a famous writer) had taken Yuri under his wing after his mother’s untimely death. Uncle is described by Pasternak as one who ‘…thirsted for a wingedly material thought, which would trace an impartially distinct path in its movement and would change something in the world for the better, which would be noticeable even to a child or ignoramus, like a flash of lightening or a roll of thunder.’ I swished Pasternak’s translated words around in my mouth, then took a mouthful of club soda from a can on my cobalt-blue side table in order to wash them down. The words ‘child’ and ‘ignoramus’ were lodged in a space between two back teeth. Warm and solitary in my snug corner of the universe, I reveled in Yuri Zhivago’s world before the Russian Revolution. Savoring all. Though this book of perpetual flavor kept time at bay, the future nonetheless was waiting  for the scraping shovels to clear away shoulder-high mounds of moldering grime mixed into yesterday’s snow.

[***Thanks to my clever son. After I told him

about the cause of my bruised forehead, he suggested a story.}