Last night I spoke at an event inside grand old St. Bart’s on 50th and Park. Afterwards I began meandering and (though I hadn’t planned to) eventually walked the entire way home, about four miles. It was winter, a bit blustery, stimulating; the streets weren’t crowded, late-working folks were leaving work or heading somewhere, hurrying decisively, criss-crossing to and fro as New Yorkers do, cozy in their wool or cashmere scarves, watch caps, winter coats. I passed Grand Central. What had once been the Pan Am building built atop the station was lit with blue lights. I have no idea what it is now. 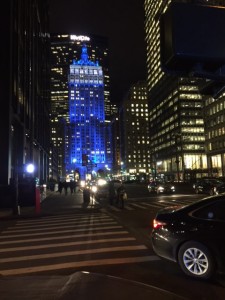 I wandered south, looked at this and that, urned west onto 42nd street. I felt happy, free, in no rush, grateful that no one was tapping their toe anywhere in the world waiting for my return or attention. I had everything I needed in life and in my red wallet tucked down into my left side pocket, also money and keys and lucky coin in the right hand pocket, leaving my hands entirely free. I was carefree as a fox!

After passing the library with the great stone lions guarding its front, the theater district loomed in the distance. The memory of playing hooky as a child rose up and made me smile. Here’s what it was like: Once in a while at around age ten, eleven or so, I’d leave for school but, instead, would get on the subway. I’d emerge at 42nd street. By then it was 9:30-ish in the morning. School books and lunch hugged close with both arms (as this was the time before we in America loaded up handy backpacks), I’d peruse the various round-the-clock movie theaters side-by-side on both sides of 42nd street until I found a tempting film and would buy a ticket. I think a movie cost around ¢25 …  Could that be? I don’t really remember but it wasn’t much and I had enough pocket money to finance my day of naughtiness.

Whichever theater I’d chosen was almost totally empty at that hour except for occasional lone persons scattered here or there. I’d head up (usually winding stairway) to the balcony, locating a central position clear of anyone else, where I could put up my feet on the seat-back or railing in front of me. Those in the theater at that hour were usually lone men, some quite seedy, a few sleeping or drinking from bottles tucked into brown paper bags, sometimes doing questionable things to themselves or each other. There were always one or two who unsuccessfully tried their luck with me even though I was a skinny, solo, obviously underage pre-teen. For protection I’d stack my school books on the seat to my right, my raincoat or coat to the left, making sure no one was directly behind me. These theater’s were ornate, the seats shabbily upholstered in faded burgundy, the lighting dim. 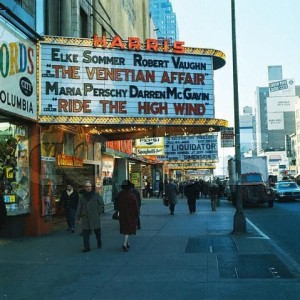 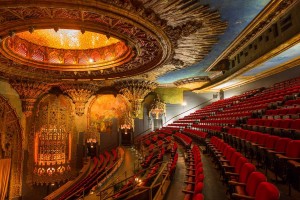 A single ticket provided two feature length films, a few cartoons, as well as coming attractions. At some point during my viewing binge I’d eat the school lunch I had with me. When I was a few years older I’d smoke forbidden cigarettes (as smoking was permitted in the balcony) and my smoke would rise up lazily and melt into the flickering light-beams shooting out from the projector. Four or so hours later I’d emerge from the theater rubbing my eyes as the late afternoon brightness was a shock. Suddenly I’d be overcome with remorse. Oh no! How could I go home? Of course they (my parents) would find out and give me hell.Befuddled, I’d shuffle east on 42nd street chewing my already bitten-to-the-quick nails, clutching books. by the time I’d reach 5th Avenue, I’d usually decide I needed to confess.

At the corner of 42nd and 5th were several glassed-in phone booths in a row that had metallic shelves inside under the phone boxes. I’d squeeze my books onto the shelf and dial my parents. In a remorseful voice I’d confess my dereliction and would (not as severely as I’d imagined) be told, Come home. I knew I’d be punished when I got there but already felt better as the devilish secret was out. One time after I’d finished my call, just as I returned the black receiver to its cradle, the phone rang. How strange! I answered, said, Hello.

A voice uttered, You don’t know me but I know you. Oh? Yes, I know that you’re standing in a phone booth on the corner of 42nd street and 5th Avenue. I know you’re wearing a yellow belted raincoat and a navy blue skirt. I looked outside anxiously but glimpsed no one who seemed to be paying any attention to me. How do you know? I asked, worried. Because, he cackled, I’m actually in a room under your phone booth You see, the floor of your booth is one-way glass and I am, in fact, looking right up your skirt and can see your underpants.

My heart sped up. Oh no! I slammed down the phone. How awful, I was deeply embarrassed and grabbed my books. When I turned to unfold the accordion door to let myself out, I saw  – not three inches away – a man in the next phone booth holding a receiver to his ear, grinning like a satyr. I bolted and ran for the subway. My punishment had already begun. 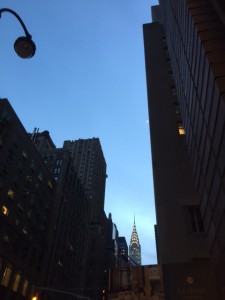 Last night after passing the length of gaudy 42nd Street, just as I had long ago, I set my compass toward home. Here I was, totally remorse free, my life mostly behind rather than in front of me. The whimsical Chrysler building came into view in all its glory, glinting in the distance.

When I relocated my home base back here after twenty-one years in the west a number of years ago I never thought I’d fall in love with NY again. It seemed like a sensible place to be, but love? Unlikely. How could one return to a marriage that had ended long ago? But, tonight, as my eyes were drawn toward Chrysler’s crescent-shaped deco spire with the charming sunbursts and gargoyles reaching into a not-for-the-faint-of-heart city sky, I realized (like with so many other things in my life) I’d been wrong. The unimagined had happened, I had fallen in love with NY again … just at that very instant.

« Some will remember » In a pickle