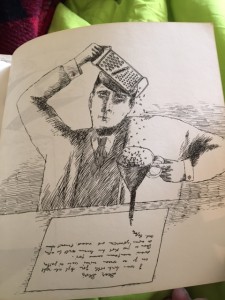 For many species and individuals the world has ended already. Everything that has a beginning has an ending, Make your peace with that and all is well. (Buddha) It’s the circle of life. But how will it end? The universe is very innovative …

I’m heartened though I’ve no doubt I’m coming-round-the mountain wearing red pajamas in the not too distant future. Unlike the Bristlecone Pine Tree that’s been growing high up in the White Mountains since the pyramids were constructed – 4,600 years ago, give or take a few hundred – it’s unlikely my tenure will last much longer than (say, with luck) four score and spare change. Unless (as Leslie puts it) “innovation”  fiddles with longevity or pauses the final curtain. It’s not impossible. Nothing is, I should be reminded. An example: Edgar Anthagros (the Greek Jew who loved Lucia Joyce through her entire life) who (in youth) woke from his own funeral. Excerpt from

…Edgar explained that all four of his older brothers had gone to the Transvaal Gold Mines in South Africa before he was born. His mother had lit candles for their safe return but none had returned. Though he was a small child during the Great War, Edgar remembered his own father going with a group of men from the village to work in French shipyards. His father was bearded with blue eyes. He recalled more lighting of candles.

After the Great War Edgar lived with his mother, grandfather, and three unmarried sisters in a tin house that had been an allied troop barrack during the war. They waited for their father to return but he did not.

The entire village worked in the shipyards.

Quite young he would feed his mother’s silkworms with mulberry leaves and tend to the bright yellow silk loops that emerged from the kettles, wound themselves onto the wooden frames. At night he would fall asleep listening to the crunching, chewing of the silkworms.

When his mother took the raw silk to the loom, Edgar would hold the soft curls carefully for her, reluctant to surrender them to the weavers.

Like a sack of stone he had fallen head first from a fig tree and died.

In the family’s tin shack a cloth covered the shard of mirror on the wall and an earthen pitcher of clean water stood at the door. Together the men carried the borrowed child’s-sized pine box to the cemetery. Women sobbed and moaned, prayers were chanted as the procession passed through the narrow streets and up toward the cemetery When the noise of a funeral was heard in other parts of town, doors were shut. Behind these closed doors the women in their kitchens, in order to walk symbolically with the dead boy, walked three steps forward and then, in order to return symbolical to normal life (come back from the dead), walked three steps backward.

When they arrived at the cemetery, a small grave had been dug. The body was removed from the borrowed casket.

Edgar’s grandfather took a handful of dirt, pulled Edgar’s eyelids open, and rubbed the dirt into his eyes. Then the men lowered the body into the grave. The grandfather splashed the body with wine, thinking, “This boy will never drink wine. Never love a woman. Never sing a song. Never carry on my name.” The rabbi sprinkled the body with dry dirt. Immediately, then, all the mourners began to throw dirt down on the small body below, head and foot. Wailing, the mother covered her own face with dirt.

It was at this moment that Edgar sat up and began to rub his eyes.

Still covered with dirt, he was carried home to his grandfather’s bed. His aunt fainted dead out when she saw him carried in through the door. His mother washed him from head to toe and tied a piece of potato with cloth onto his head. She made pinholes in a sheet of newspaper and covered him front and back.

His mother then mixed a glass of water with sugar and went to the fig tree. She poured the mixture into the ground where the accident had occurred. His mother believed that Edgar had been smitten with the evil eye, perhaps from the dangerous blue eyes of his father. … 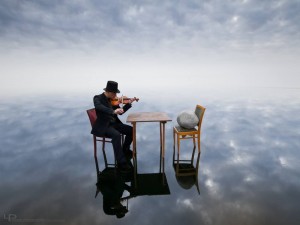 « Milosz in Krynica spa and tonight » Aunt Dorothy is One Hundred