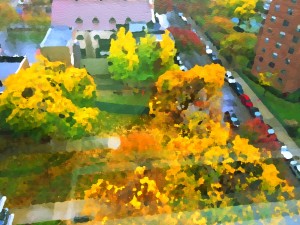 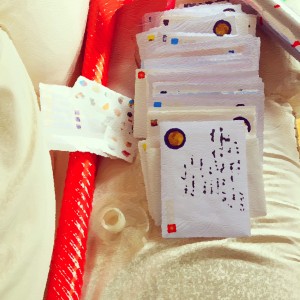 Where brand new book idea is going: A hint:

Unwapping it, I fold the corners,

Putting paper and ribbon between her

And this small box. I could hand it over

Out in the open: why bother to catch her eye

With floss and glitter?

Looking manhandled, it lies there

On backwards. And minutes from now,

She will have seen what it is

But between her guesswork

And the lifting of the lid, I can delay

All disappointments: the give and take

Of love is in the immediate present

Again, though I can’t remember myself

What’s in it for her.

What remains of those with shared history: An old friend visited from North Africa – a friend for over forty-five years. She brought her hostess. I cooked. The atmosphere was unusually subdued. They left after sorbet. Was dispirited but not unpinned as so many peers have died or are dying or dementing or unraveling. I phoned the next day. Had I said/done something wrong? Was told: You tried to poison us. Your silver soup spoons made us sick. I was nauseous and sick all night…. I was speechless. I examined the silverware in the dish drainer. Yes, indeed, the soup spoons were tarnished, could benefit from polish. But … poison her … This was a different can of worms. 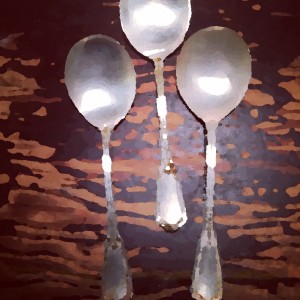 What now: I polish the spoons and wonder, was she kidding or has one more chunk of my history gone with the wind? Meanwhile, as consolation, the first snow has started falling.

Received this from North Africa yesterday:

Do no longer worry about it, you are always forgiven, because
we don’t see as well, also we don’t have certain Haus Frau qualities. Nie toi nie moi.
I’ve settled in once more on this end, were spring has began, and I’m making some Olive oil thirty litter I filled into bottles wit a branch of Thyme and Garlic. Stay strong and healthy for all the changes we have to face ,and deal with in the Future .

My Exhibit is in ten days…
Always know that you are in my head and heart and I was very happy to see you. I can’t believe it a New year is coming up,but so it is. I wish you the most ,my very best for 2017 Keep up the good work that you are doing. Take good care of yourself and I will try to do the same.Lot’s of love always R

Another loss averted … for now.