Nov 12, 2016 By Alison Leslie Gold in Memories of Anne Frank, Reflections of a Childhood Friend 2 Comments 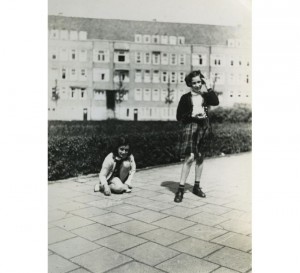 Hannah “Hanneli” Goslar [R.] and Anne Frank [L.] were best friends, fellow Jewish refugees who had come to Amsterdam with their families as small children in 1933 fleeing Hitler’s Germany. In photo [above] these friends have fun with Anne’s marbles on the sidewalk in front of their apartment building in safe Holland unable to imagine what fate awaits them. These marbles were forgotten during the War and Occupation that obliterated their peaceful world (in which Anne, her sister and her mother and father were deported and all except her father were murdered). They were recently rediscovered and learned that Anne had given her marbles in their box along with a tea set and a book to another friend (Toosje Kupers) for safekeeping. Seventy years passed before they were noticed in a dusty attic. 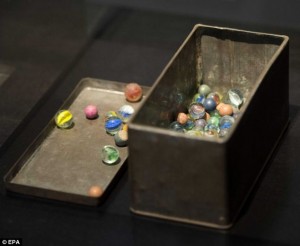 From age four until age thirteen Anne and Hannah lived next door to each other, walked to school together every day, had sleepovers, rode bicycles, went to the cinema, celebrated birthdays, went on holidays, were close to each other’s families. They knew each other inside out. Like Anne and her family, the Goslar’s also were deported by the occupying Germans. But, unlike Anne, Hannah didn’t perish during the war. She survived and lives on, a proud mother, grandmother and great-grandmother in Jerusalem, Israel, her beloved homeland.

Today is Hannah’s eighty-eighth birthday. Happy Birthday dear Hannah!!  Wishing you health and safety in your remaining years. It has been great honor to know you and be your biographer. 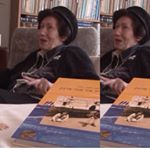 [Hannah, above, with Hebrew translation of

Reflections of a Childhood Friend

telling the story of Anne and Hannah’s poignant friendship}

« Gum on my shoe » Marinating the election in salt water