Gum on my shoe 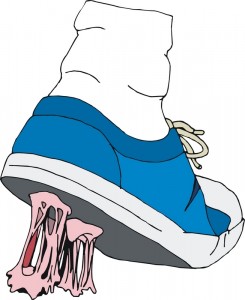 I’ve begun a new book. It’s theme is very heavy and dark. Irrespective of promises made (to myself and others) to lighten up, I can’t seem to do so. At least not with work. Only gravitas engulfs me – provides me with raison d’être. Where do you find your ideas, I’ve been asked many times. Ideas are like gum. I’ve stepped on melting old gum barefooted, while at the beach, pealed it out from between my toes. I’ve scraped it off my shoes. Or tried. I’ve felt lumps of it with my fingers pressed under counters and coffee-shop tables, under seats on busses. Like gum sticking to the bottom of my shoes and good fried chicken sticking to my ribs, heavy subject-matter grips. Ideas are like gum. Or fried chicken.

I asked an English friend her thoughts on chewing gum. Her answer: It’s American, isn’t it? Every WWII film depicts American GIs distributing chewing gum to kids. Is she right? Following, a bit of previously unknown history found on an online blog:

Chewing gum became a wildly successful product as a result of producers like William Wrigley who made chewing gum something that was popular and in demand. They created the desire for a product that has no real value. Chewing gum’s impact can be seen in multiple factions of American society after its invention.

Elbert Hubbard is credited with saying, “We will never be a great country until we expend more money for books than we do for gum,” and the craze for gum truly did take over the country. Children throughout the country could not stop buying the product, and sales increased even more when playing cards depicting American celebrities, including baseball players, Elvis Presley, the Beatles, and even Lyndon B. Johnson. 25. These cards encouraged kids to chew as much gum as possible and build a large collection to trade with and brag about to their friends.

The desire for gum continued with Americans as they went into war.  As a part of their rations, American troops in WWII received gum. Indeed, Redclift argues that the gum was an integral part of the rations, and every American GI received it for each meal. 26. It was lightweight, unaffected by temperature, stable for long periods of time, and was appealing.  Over 500 million sticks of gum were chewed by the soldiers every year, and this forced the Wrigley Company to only provide gum to the U.S. Army and Navy in 1944. 27.  Sleep researcher Gary Kamimori invented caffeine gum, and the U.S. Army readily supplied this to its troops to help through the fatigue of military operations. Each piece contained roughly the equivalent of a six-ounce cup of coffee, minus the difficulty of transport, need to go to the bathroom, and can be used in all kinds of temperatures. 28. 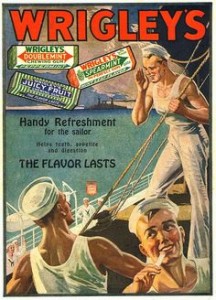 The medical uses of gum have been discussed by many dentists and doctors throughout the decades. While some parents feared that gum would cause children to have buck teeth, clog one’s intenstines or even seal a person’s lips together so that they couldn’t breathe, these myths are unfounded and untrue.  In fact, doctors have found that gum strengthens weak jaws and reduces muscular tension and helps the chewer relax. It was reported at one point that a restaurant at the House of Representatives stocked gum purely for a few representatives that habitually chewed gum as a result of stress. 29.

In the early days of gum’s popularity, there was some concern over the manners of chewing gum.  Etiquette author Emily Post at first refused to even discussed chewing gum, but by the 1950s, she could only say that it was a bad habit that a lady should not engage in. In the 1960s, she ranted about chewing gum made a person look like a cow chewing its cud. 30. Nevertheless, chewing gum was simultaneously something that was healthy and a manifestation of self-confidence and being cool. 31. The intrinsic meaning of gum and “cool-ness,” especially for something that had invented meaning and no real use, is particularly remarkable. (I saw no writer credited, or I would have given credit. Thank you whomever you are.)

In childhood my Aunt Dorothy [see “Lost and Found” published by the Am. Univ. of Paris] kept a pack or two of Black Jack gum in her two-ton black leather pocketbook. She was always good for a stick or two. Once chewed, our tongues went black. We’d buy packs that included gum and baseball cards and sometimes threw away the gum. We were told not to swallow it but did anyway. We’d stuff our mouths so full of Dubble Bubble bubble gum that we were barely able to chew.We’d blow bubbles; the bigger the better.  Sometimes a bubble would burst leaving gum on our noses and cheeks and eyelashes. Like I said: ideas are gum. 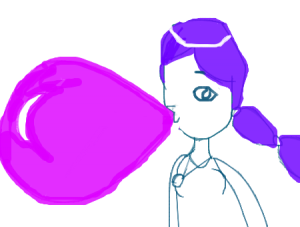