Oct 28, 2016 By Alison Leslie Gold in Personal No Comments 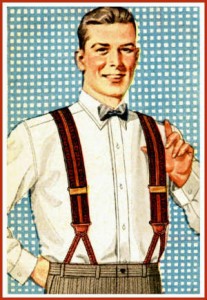 The new khaki jeans I spied at an Army-Navy-type place on 7th Avenue (unbeknownst to me) buttoned below (not at or above) the waist; otherwise they fit like a dream. I grabbed s pair in my size, paid up, went home, slipped them on, felt great. As I am way overdue with refreshing my wardrobe one item at a time, with these jeans, I had finally made a start. (As my mother used to say of my favorite items of clothing after addictive wearing: You turn everything into a rag. And it was true.)

Once I’d loaded their deep pockets (with keys, lucky coins, cash, red wallet, toothpicks), I went walking. By the time I’d crossed 28th Street my trousers had started to droop downward onto my hips; by 29th Street they’d crept lower so I hiked them up, continued on. After a few steps they slid again and I hitched them up. Street by street, this action needed repeating. Tugging them up toward my waist wasn’t the biggest deal until both hands were full – one with a container of afternoon coffee, the other a sack of avocados and lemons. Had I not set down my purchases momentarily in order to strongly hitch my sagging jeans way high up (nurd-style), they’d have dipped below my pantie line or fallen off completely before I’d reached the safety of 26th Street.

Had this come to pass, a G-String or a “Foxer” (trendy blend of men’s boxers and women lace panties) wouldn’t have been exposed, nor would a silk chiffon pantie designed by Jean Yu. Instead, something white, 100% cotton, made in Haiti, better left unexposed, would have reared (no pun intended) itself, qualifying me as one more neighborhood low-riser.

At home I scratched my head, went online and ordered (a pair of?) … something elastic (akin to a garter belt) … suspenders. Once my order was sent, a compendium of associations woke and gurgled:

Jaleel White wore red ones in “Family Matters” along with a striped polo shirt and a pocket protector.

James Bond did in Casino Royale.

the villain Voldemort as well.

So did I, in kindergarden or maybe first or second grade.

GQ Style guy R.J. Firchau added his 2 cents: “Whenever I see a man wearing a belt and suspenders, which is not all that often, I think, now, here is a pessimist. Guys who wear a belt and suspenders probably carry umbrellas on sunny days and wear more than one condom. So, with that sentiment in mind, go forth and try suspenders for yourself. Incorporate them into any and every outfit, and leave the belts at home. … suspenders, considered as undergarments until the late 1930’s and early 1940’s. In the 1960’s, working-class British adopted them into their looks, combining suspenders with tight jeans that really didn’t need help staying in place. Later, in the 1970’s, working women in England and the US incorporated them into their wardrobes to achieve a sort of “unisex” look. In the late 1980’s, People Magazine dubbed the trend of suspenders hanging from one’s waist to be a very ‘sensual’ and fashion-forward look. Around the same time, Steve Urkel from Family Matters made suspenders synonymous with trendy nerdiness….” (so says R.J. Firchau in The Gentlemanual – “The Story of Suspenders”) Much to digest.

Mom said I didn’t have a belt that fit and
I was going to have to wear suspenders to school
next day. Nobody wore suspenders to second grade,
or any other grade for that matter. She said,
You’ll wear them or else I’ll use them on you. I don’t want any more trouble. My dad said something then. He
was in the bed that took up most of the room in the cabin
where we lived. He asked if we could be quiet and settle this
in the morning. Didn’t he have to go in early to work in
the morning? He asked if I’d bring him
a glass of water. It’s all that whiskey he drank, Mom said. He’s
dehydrated.

I went to the sink and, I don’t know why, brought him
a glass of soapy dishwater. He drank it and said, That sure
tasted funny, son. Where’d this water come from?
Out of the sink, I said.
I thought you loved your dad, Mom said.
I do, I do, I said, and went over to the sink and dipped a glass
into the soapy water and drank off two glasses just
to show them. I love Dad, I said.
Still, I thought I was going to be sick then and there. Mom said,
I’d be ashamed of myself if I was you. I can’t believe you’d
do your dad that way. And, by God, you’re going to wear those
suspenders tomorrow, or else. I’ll snatch you bald-headed if you
give me any trouble in the morning. I don’t want to wear
suspenders,
I said. You’re going to wear suspenders, she said. And with that
she took the suspenders and began to whip me around the bare legs
while I danced in the room and cried. My dad
yelled at us to stop, for God’s sake, stop. His head was killing him,
and he was sick at his stomach from soapy dishwater
besides. That’s thanks to this one, Mom said. It was then somebody
began to pound on the wall of the cabin next to ours. At first it
sounded like it was a fist–boom-boom-boom–and then
whoever it was switched to a mop or a broom
handle.  For Christ’s sake, go to bed over there! somebody yelled.
Knock it off! And we did. We turned out the lights and
got into our beds and became quiet. The quiet that comes to a house
where nobody can sleep.

I don’t know why Brits call them braces or why the French say galluses. I do know there’s a Japanese suspender dance – “Girl’s Day” 2013 – (Davee Ver). Have a look/listen. Have a snap. If that doesn’t scratch the itch, here’s Grandpa Shufflin’ (2011 chokemymonkey) wearing suspenders. Not to be missed. My pair is meant to arrive tomorrow. They’re black. Two inches wide. With grippers, not button eyes. (See below but add some years, silver hair, some pounds to the wearers and replace the black colored trousers with the color khaki.) 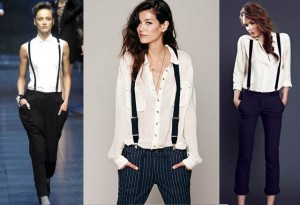