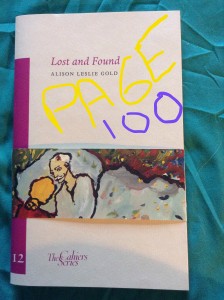 was standing in the elevator when the door opened.

But because my neighbor had not finished talking,

I could not get on and the door slid shut,

to the wet street

Thanks for your efforts. Miep’s birthday is on February 15th. She will be 100 years old on that day. If you turn up any information in the short time left before her birthday that might help us locate Leon Maximilian Prinz, it would be immensely appreciated. I can be reached by email even the day before I leave for Amsterdam.

Did I ever tell you that when I was in grammar school a volunteer was solicited to organize an ever-growing collection of unclaimed objects that had become too large to be contained in its bag. I volunteered.

I rounded up several cardboard boxes, made labels with blue and black magic markers, sorted the items, mostly single mittens, sweaters, bits of costume jewelry, hats, galoshes that were fitted onto and pealed off shoes on days of rain or snow. There were yo-yos, bus passes, once or twice one of those fancy new ball point Papermate pens, eye glasses, notebooks, assignment books. When my Lost and Found system was complete, a monitor or minder was sought. The duty of the volunteer was to sit in a straight-backed chair in the empty room and wait in case someone came looking for a lost item.

No one volunteered, so I took the position, began sitting on the chair for an hour or two at a time, missing class. I began to miss so much class that when I left my house in the morning it was as if I were not going to school (third grade) but to my job as CEO of Lost and Found. In this grade we were taught spelling, began geometry and French, among other subjects. I missed much of what was taught that year and then much the next and the next, as I continued to refine and run my Lost and Found.

Am pleased that your back has improved. Glad it’s not sciatica again as I remember well the bout you suffered when we first met, while you were editing my first fiction, agonizing over too many ellipses and my slapdash grammar.

My overnight flight arrived in Amsterdam in the morning, Valentine’s Day, Feb 14th. I went directly to Miep’s apartment. Right away we ate raw herring and raw onions, as she likes. I commented on the big birthday, my amazement. “Yes,” was all she said, “Yes,” amazed herself, smiling.

She returned to the armchair beside the coffee table where she now spends most of her day. Beside the chair is a walker which she never uses except for the basket attached to the handle in which she keeps copies of the two different newspapers she reads daily, also the clicker that operates the television that faces her chair, her house keys, pocketbook.

Between us is the narrow coffee table on which sits the pile of correspondence she has received since my last visit six months ago. Attached to each is a Xerox copy of her response. Dozens of them. I am expected to read each and every one, while Miep looks on with satisfaction, pleased that even at her advanced age no letter has gone unanswered. It’s only in the past year that Miep has allowed me to carry the tray from the kitchen to the coffee table. She still insists on preparing the coffee herself.

We caught up on news, both personal and about our book which is being reissued with a new epilogue, and then we return to the dining table, covered with a Turkish carpet in the old Dutch manner. Half the table is piled with correspondence and other business. We spread a white table-cloth on the remaining half, set out plates and lunch on the usual bread, butter, liverwurst, salami, cheese.

For the first time since I met Miep 24 years ago, in the evening, rather than watch the 8 o’clock Dutch news and televised political discussions until 11, she drew the curtains, said, “We go to bed!” It was 7:40. She said she was tired. Now, as I write this, she is in her bedroom wearing pale peach-colored silk pajamas. The house is dark, the clock does not tick anymore.

I hope we will have our usual breakfast together tomorrow morning – the cheese, buttered bread, tea, liverwurst, a glass of milk – before the festivities begin, when her son Paul his wife Lucie and his three children and the various special guests will arrive. I’ve brought her a bottle of Chanel No.5, her favorite, with the promise that when she uses it up, I’ll give her another. As usual, the oil portraits of Anne Frank (on the north wall beside the dining table) and Jan Gies (on the east wall overlooking the table) will make it seem as if they are with us.

Back in New York since late February after my visit to Amsterdam. Winter has been snowy and very cold, just as I like it. There has been no break in the weather even though Spring has officially arrived. Once again the chance of a thumb’s smear of ash on my forehead has been foregone because I’m not Catholic and lack whatever it takes to impersonate a Catholic. Another Ash Wednesday has gone. Passover looms, Easter lurks.

The Einstein look-alike who lives in my building has moved. …

published as part of the Cahiers Series,