Oct 14, 2016 By Alison Leslie Gold in Fiet's Vase and Other Stories of Survival 1 Comment 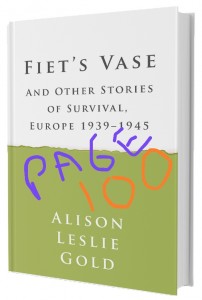 ... Their younger brother, Iziu, age ten, was sometimes able to bring them a pot of their mother’s hot soup. But sometimes he couldn’t make it, and Joseph and Marcel had nothing to eat.

One very dark night, Joseph and Marcel were making their way back to their rented couch in time for the curfew. As they approached the bridge, someone warned them that an SS officer was blocking that bridge and shooting at any Jew who tried to cross. Joseph and Marcel ran in another direction into a strange neighborhood. Just then, all the lights in the town went out due to a power outage. Disoriented, they wandered through dark streets. They kept walking and realized they had drifted away from the town and were walking in mud through a field. They could hear the sound of a flowing river; it was so dark that they could see nothing before them but looming shapes. They groped their way in another direction and found themselves in an unfamiliar neighborhood, had no idea where they were. They were freezing now, lost and exhausted. Seeing candles burning in the window of a house, they remembered that it was the first night of Hanukkah. Something made them walk toward this flickering candlelight. When they got almost to the door of the house, they realized that they’d walked right to the door of the chimney sweep. They entered and the chimney sweep explained the power failure and told them he’d lit candles in the front room for them.

In Joseph’s words: “To this day, I’m unable to explain how we managed to reach that house in the gloomy night, how we crossed the river and the air base without being aware of it.” Even when he examined the town after the war, he could not unravel the route taken. He concludes: “The mystery can only be explained as our private Hanukkah miracle.”

Eventually Marcel and Joseph went to the Krakow ghetto with their family, but then were sent to the Plaszow work camp. At Plaszow, night and day, the white smoke of those who had died that day rose from the crematorium and the stink of burning human remains filled the air. Joseph describes that grim sight: “The departed in the form of white smoke, rose easily upward, waved their hands in parting and viewed with pity all those who remained behind. Then they danced gaily in celebration of their new freedom, before disintegrating in the air.”

Because of his drawing skills, Joseph was given the job of drawing plans and signs or anything else that needed to be designed or painted. His mother worked outside the camp every day. Marcel was sent to the Jewish cemetery, where he was ordered to smash headstones with a sledgehammer. The pieces of this sacred stone would be used for paving roads, One morning Marcel confided to Joseph that he’d found a priceless gold cup in the cemetery and had hidden it. “It’s worth a fortune!” Marcel told him. Joseph looked at the tarnished but obviously pure gold cup and was alarmed. He urged his brother to get rid of it. And quickly.

That night, he and Marcel were planning to visit their mother, hoping, since she worked on the outside of the camp and could often scrounge up extra food to bring home for her sons, that she’d bring some with her. After Joseph had begun his day’s work of painting, writing slogans, he heard in the distance the sound of sledgehammers. Among them would be his brother Marcel. Late that afternoon Joseph heard that a hanging was going to occur that night. When he inquired as to who would be hanged and why, he was told that someone had been caught with stolen gold. The rumor was that the person who would be hanged had a short name that began with the letter B. Joseph didn’t need to hear any more – he wept, knowing that they’d caught Marcel.

As he walked toward his mother’s barrack, he could almost hear the sound of Kaddish in the sound of the blowing wind. He found his mother back in the barrack. She told him she had a great surprise. To go with their ration of bread and margarine, she had a boiled egg and a slice of onion to share among the three of them. Ashamed, unable to tell his mother the truth, he pretended to have a headache and left the barrack. Joseph was walking aimlessly when Marcel appeared from nowhere and announced that he’d sold the gold on the black market. “I watched him with wonder and joy,” was how Joseph described the emotion he felt. Eventually, he discovered that the hanged boy was named Beim. The Germans had found a gold watch in Beim’s pocket.

Second miracle: Joseph first met the woman who would be come his wife – who …

Other Stories of Survival,

available on Amazon as a paperback and kindle