Oct 12, 2016 By Alison Leslie Gold in Love in the Second Act, Uncategorized 3 Comments 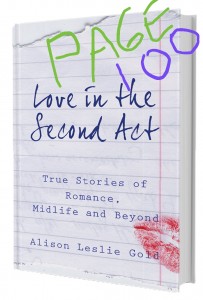 In Greece, I travel to a house on a small island I’ve visited again and again through the years.The light beguiles. On my way back from a swim—yes, the  swimming  goes on into  December sometimes—I pass a man and a woman  I’ve casually known for many years—Maggie Martin, a former dancer originally from Jamaica, and Stathe Dekavallas, a retired Greek architect. They’re known on the island  for their operatic relationship.  They have their arms snaking around each other, swaying slightly from side to side as they walk in the direction of their seafront villa. They hail me, explaining that they’ve had too much wine at lunch because they’re celebrating.

“l feel so strange,” Maggie comments, after kissing me on both cheeks in a queenly gesture.”l feel like a virgin.”

I do a double take. I know that Maggie has been married at least two times before, has a grown daughter and grandchildren, and that Stathe has two children past university age.

“Something like that. You see, Stathe got his divorce last week. From the time he got his divorce, Alison, I express to you I haven’t made love to him. It’s so strange to be with a man who doesn’t belong to someone else. After sixteen years of being the other woman, I’m with a man who’s free. I feel shy like a virgin.”

I am so struck by this comment that I ask if they’d be willing to be interviewed. They agree and we make an appointment. Still entwined, they stagger on. I hope they’ll remember our appointment. They do. A few days later, I join them in their living room facing the spangled sea at sunset. The spectacle is over, the sun has sunk below the hills and the last lights from it—yellows, pinks,  the palest blue—are draining away. On the walls are wonderful paintings, mostly landscapes, done by local artists. Maggie places a teak tray of drinks, teas and biscuits before us. I bring up the comment that had intrigued me so, while Stathe lights a fire in the stone hearth. The temperature is dropping now that the sun’s gone.

“The other day you told me that you felt like a virgin. Can you explain this?”

There is a long pause. She sips from a tall glass of something that looks like iced tea but, knowing Maggie, probably holds a shot or two of vodka as well. She’s thin as a rake, ageless. Her ochre sibyl’s eyes draw mine.

‘Tm finally living with a man that’s not married .”

She chuckles, sips from her glass.

“It’s easy when you’re living with a man that’s married and you can be a little diva … a devil. Right now I have to face our reality and—it was really crazy—I had toput him away and then retake him as a single man. It’s not logical. It’s only sentimental. It isn’t that I’m a virgin. I want tofeel like a virgin again, like an innocent girl just beginning her journey. I think it’s only me who would react this way.”

“Why?” I ask Stathe.” Why divorce after all this time?”

“As we are growing older and older, so we have to put this reality of ours into practicality.”

“You always look so happy when I run into you. So in love.”

“…we nodded.” Maggie finishes the sentence, Stathe starts a new one. “Then about ten years later, I would say, we met again at  a taverna. I had just decided to separate from my wife, to resign from my job. Yes. I was really tired and bored. I’d already realized that I’m playing my life like a role in the theater. Not living it. I decided just to change everything at any cost. Maggie was at the same stage for her own reason. She had just walked away from …”

“… everything had collapsed under me.”

“I saw her and wanted to catch her. Or to die, at least. But Maggie was at the end of something …”

She interrupts, “I had to be careful. My eight-year relationship  with a German was not quite finished. So I was careful. We took off to other places. We went to the island of Aegina. We made mad rendezvous in the island of Spetsei and like places. Finally he was forced to tell his wife about us.”

“My wife asked me, ‘I heard from my friend that you are with Maggie. Is it something serious?’ I said yes.”

She challenges him with her musical, yet steely tone of voice. “I didn’t believe it was that serious.”

To Maggie: “What did you think it was, a lighthearted interlude or …?”

“No. We shared wonderful evenings. He didn’t speak English, I was teaching him English. I really didn’t know how I felt until I knew that I’d finished with my last husband. Then I knew that this was it.”

I ask for a little background. Stathe explains that he came from a family that was created between two refugees from Smyrna who were thrown out by the Turks in 1922. The family came to Greece penniless, with nothing.

“We were an immigrant family that flourished. I studied architecture and then worked in the civil aviation with aerodromes. After twenty-five years, I wanted to change the totality of my life.”

Maggie was a young girl when Jamaica got its independence in 1963. Her parents took her away to England, where her father was secretary to the ambassador.

“My father was a great bon vivant. He got into debt. By the way, my mother’s family is still in Jamaica. I grew up and finished school in England, at Chelsea High School, living in Redcliff Gardens. My father was a great man. In England he changed 380 degrees, stopped being a bon vivant, became a family man, took care of us. I was studying dance at the London Academy of Dance. Classical dance, ballet, until I was chosen to be part of an exchange with Alvin Ailey. Alvin Ailey got interested in me and so I joined a group. I was taught primitive dancing for the first time. I was seventeen. A few of us formed a group and went to Switzerland. There were seven teen in the group. Five boys, twelve girls. I was seen by a modeling agency and, though I continued dancing, I began modeling.”

She explains that at that time she got pregnant and had her daughter, whom she named Simone.

“The modeling agency got into deep shit. I had some money so I took over the agency. When Simone was three and a half years old her father reappeared and we married.”

Talking about the past causes her to tear up. “Oh boy, this is hard. At the time, I was number one as the little colored girl in Geneva.”

She’s quite emotional. I ask Stathe, “So here we are, a few years later. Let me ask you, Stathe, I heard you had some health problems a few years ago.”

“I think it was a depression. It happened in ’96 and it happened for the reason that, I think, it was the first time I started thinking about making another change in my life, to get the divorce. I talked to my wife and she put down her conditions. Also there were some financial fears. Then I had a very, very hard attack of a disc. I got an operation in July of ’96. I was not feeling strong.”

“Papa, the physical healing was so fast. It was what happened mentally after.”

“Okay. It was. The operation made my body feel not so strong. I’d been an athlete. I’d been a very powerful being.”

“From ’89 on I was giving three quarters of my income to my wife and daughter. My son was already at university with a scholarship. I was brought up by my parents to be … ha, ha …. responsible and . . . ha, ha . . . guilty. I’m still like that. My depression lasted four, maybe five months. Then I got out of it.”

“Did you ever seek help?”

“I went to a psychiatrist.”

“Do you know what got you out of it?”

“I know but it doesn’t matter.”

Maggie disagrees. “It does. It’s that I had been watching you pacing, not eating, not sleeping, losing a kilo every day. He didn’t talk to me. We were sleeping together, he never touched me, we just slept. Then one day I realized I couldn’t live in the situation. I told him, ‘You know what. I’m going away.’ He said, ‘You can’t do that.’ I pulled off a belt and I beat him. I beat him and I beat him very gently, and the next day we talked: I said, ‘Now that I’ve given you the spanking for what you did to me, are you going totell me what is wrong?’ He said to me, ‘I can’t stand being rent … living in the house of someone else in Athens.’ ”

[Love in the Second Act,

True Stories of Romance, Midlife and Beyond,

available as book or kindle on Amazon]