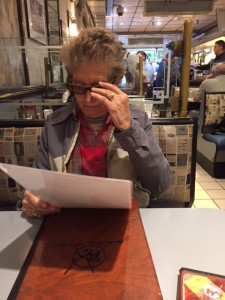 My much appreciated neighborhood friend Louise [the admirable painter Louise Fishman] gets a very high score for spontaneity. Over the past dozen years one or the other of our phones will often ring between 8 and 2.

One voice will ask, “Breakfast?”

The other will respond (usually), “Sure.”

Louise and I then meet for breakfast at Chelsea Square (closer to my apartment) or at Malibu (closer to hers). Both are classic New York-style coffee shop/diners with Greek roots.

Yesterday morning we met at Malibu because I wanted to take these photos and celebrate our neighborhood hang-out (also celebrated in Netherland by Joseph O’Neill) for it’s generosity after the recent terrorist attack. (It took place one block from Louise’s apartment, three-and-a-half from mine, almost in front of Mallibu.) Here’s what happened on September 17th:

— An explosion during a bustling night in NYC’s Chelsea neighborhood Saturday that resulted in 29 people being injured was “obviously an act of terrorism” although no links to international groups has been discovered.

Twenty-nine people were hospitalized overnight and released by Sunday afternoon due to an explosion around 8:30 p.m. Saturday in front of 135 W. 23rd St. between Sixth and Seventh avenues. None of those hospitalized sustained serious injuries, and the worst was described by FDNY as a puncture wound.

The explosion caused “significant damage” to buildings, making it all the more remarkable that nobody was killed. The bombing was one of four eerily similar incidents to hit the tri-state area on Saturday…

A few days after the explosion, Louise posted the following on fb:

Finally had dinner at the Malibu Diner on 23rd Street between 7th and 6th – the epicenter of the bomb blasts the other day. I found that the owner and cooks at the diner had made two hundred free breakfasts for the tenants at Selis Manor, the residence for blind and disabled people.

The owner also paid for all the food for the first responders, police, fire and ambulance medics, etc. Apparently the mayor and other dignitaries stopped by yesterday to thank them, but offered no remuneration for their good work during the crisis, nor did they bother to have a cup of coffee or lunch during their visit. Why doesn’t the city step up to the plate? The Malibu owner and waiters have been serving the disabled residents with kindness and generosity not seen in this city for a very long time. They help seat patrons, assist in reading the menus and in whatever way they can. They spend time sitting with them, laughing and exchanging news. A great service for our community. I know that my friends and I are proud and happy to have such compassionate neighbors.

WHAT WAS THE MAYOR THINKING??? 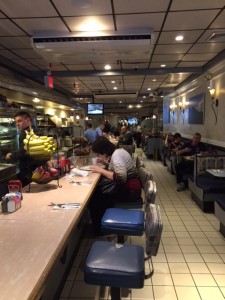 I can’t imagine what our (otherwise kindly) mayor was thinking but saw on entering the restaurant from 23rd Street hanging on the wall behind the cash register, a large, ornately-lettered certificate honoring Malibu Diner given by the city. Perhaps Louise will find it in her heart to forgive the mayor and the city for their earlier oversights?

It’s our first breakfast since the disaster and, as usual, many tables are occupied. Included are a few of the usual loners eating while reading newspapers or books. After we’re seated, two familiar blind customers pass our booth (meant for four) tapping white-tipped canes. Spacious booths fill two rooms beyond the opulent pastry cases and the long, formica counter. Today Louise orders Huevos Rancheros – its many componants served on about six plates – while I, between meals, eat nothing, only sip iced tea through a straw, plus one refill a little later on.

Normally Louise and I have a set breakfast that can include a shared rasher of crispy bacon. My usual: two-eggs-over-light, fried potatoes, toasted, unbuttered, sesame bagel. Louise’s usual: Two-eggs-over-light, a few fried potatoes, a bialy.* (Who knows what mysterious X-factor has motivated her decision today.) Louise’s many-plated breakfast  includes tortillas. With her usual culinary refinement, she takes her time eating and doesn’t gulp her food as I’m known to do. We catch up on all the news – gossip, deaths, ills of friends, travel plans, art, literature, the election, news of a 1000 photo Marilyn Monroe collection Louise has discovered.

Finally one of us pays our bill. Louise returns to her life and work and spouse. I to mine minus spouse. It’s a good October day and I love my life.

[*My hand goes over my heart at the thought of a bialy. Unlike the boiled bagel, the bialy is baked but, like the bagel, it conjure lost worlds and childhood sundays. Soft, yeasty bialys entered my childhood when my Russian grandfather and Austrian grandmother arrived on a sunday morning carrying a paper bag filled with bialys from Brooklyn. Louise shares a similar history though hers took place in Philadelphia rather than New York. Unlike my heartless bagel, there’s no hole at the center of her sensitive, well-meaning bialy. Instead there’s a wobbly depression containing a few crisp onion bits.] 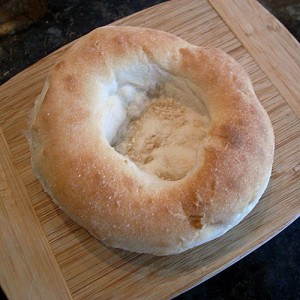